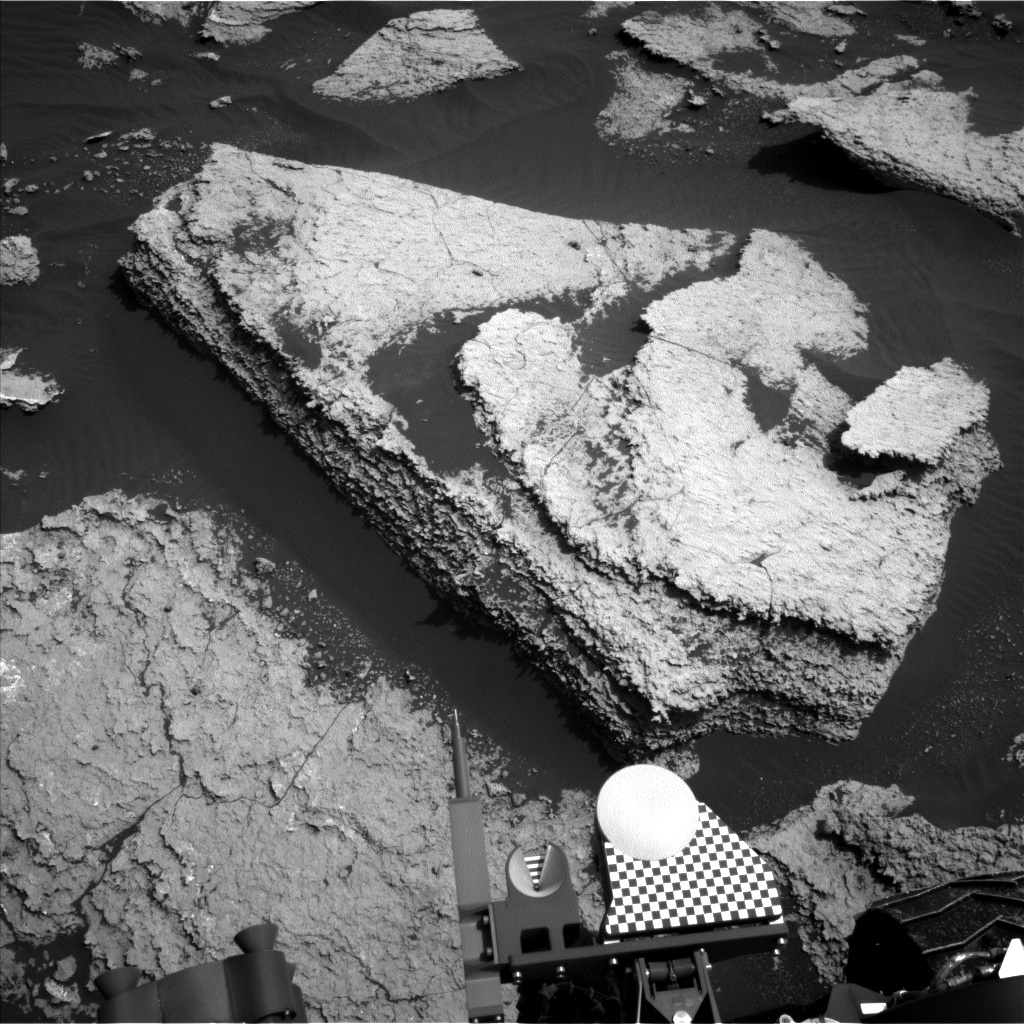 In the Sol 1673 drive, the rover planners aimed us for a nice curb of Murray bedrock which we could investigate with targeted science (with Mastcam and ChemCam) and contact science (with APXS, MAHLI and the dust removal tool (DRT)) over the weekend. The rover has to be sitting stably on the terrain for us to conduct contact science, with none of the six wheels in danger of slipping off a rock as we deploy the arm and turret. The arm and turret together are over 2 m in length and 95 kg in mass, providing a lever arm significant enough to move even our 900 kg rover! When placing APXS in contact with a rock, or MAHLI 1 cm away from a rock, the last thing you want is for the rover to move. While the rock in our workspace was indeed enticing, the rover planners found that two of our wheels were partially perched on rock slabs like those in the workspace, precluding us from using APXS and getting MAHLI any closer than 10 cm to any target in the workspace.

With these constraints in place, the science team set out to make lemonade. GEO planned three ChemCam rasters, with the "Back Cove" and "Lookout Point" targets selected to survey the chemistry and grain size of the Murray bedrock, and the "South Brother" target aimed at one of the gray, non-Murray pebbles seen dotting the bedrock surface in the workspace. We imaged both "Back Cove" and "Lookout Point" with MAHLI from 10 cm, the former with a single image, and the latter with a 3x2 mosaic that also captured multiple Murray layers around "Lookout Point". Mastcam also imaged the three ChemCam targets, and acquired mosaics of the Murray bedrock structures both in front of and along the starboard side of the rover. Since we would be in place for multiple sols, GEO planned two Mastcam images of the sandy target "Grant Cove", one image on Sol 1674 and the second on Sol 1675, to look for wind-induced changes.

ENV kept busy, obtaining their weekly morning imaging suite paired with afternoon observations to determine diurnal variability in cloud cover and the amount of dust in the atmosphere using both Mastcam and Navcam. ENV took advantage of the ability to use MAHLI, as well, acquiring an image of the REMS UV sensor. This is done periodically to determine the amount of dust covering the UV photodiodes, because the longer Curiosity remains in the Martian environment, the more dust settles on the detectors. The increased dust covering the photodiodes affects the REMS UV dust measurements of the atmosphere, so images of the sensors allow for recalibration of the observation. Accurate measurements from REMS are important for comparison to the Mastcam and Navcam dust measurements.

Once all these great observations are wrapped up, Curiosity will drive further up the slopes of Mt. Sharp, picking her way across the rough terrain toward yet another intriguing Murray bedrock patch. What surprises await? Check back next week to find out!