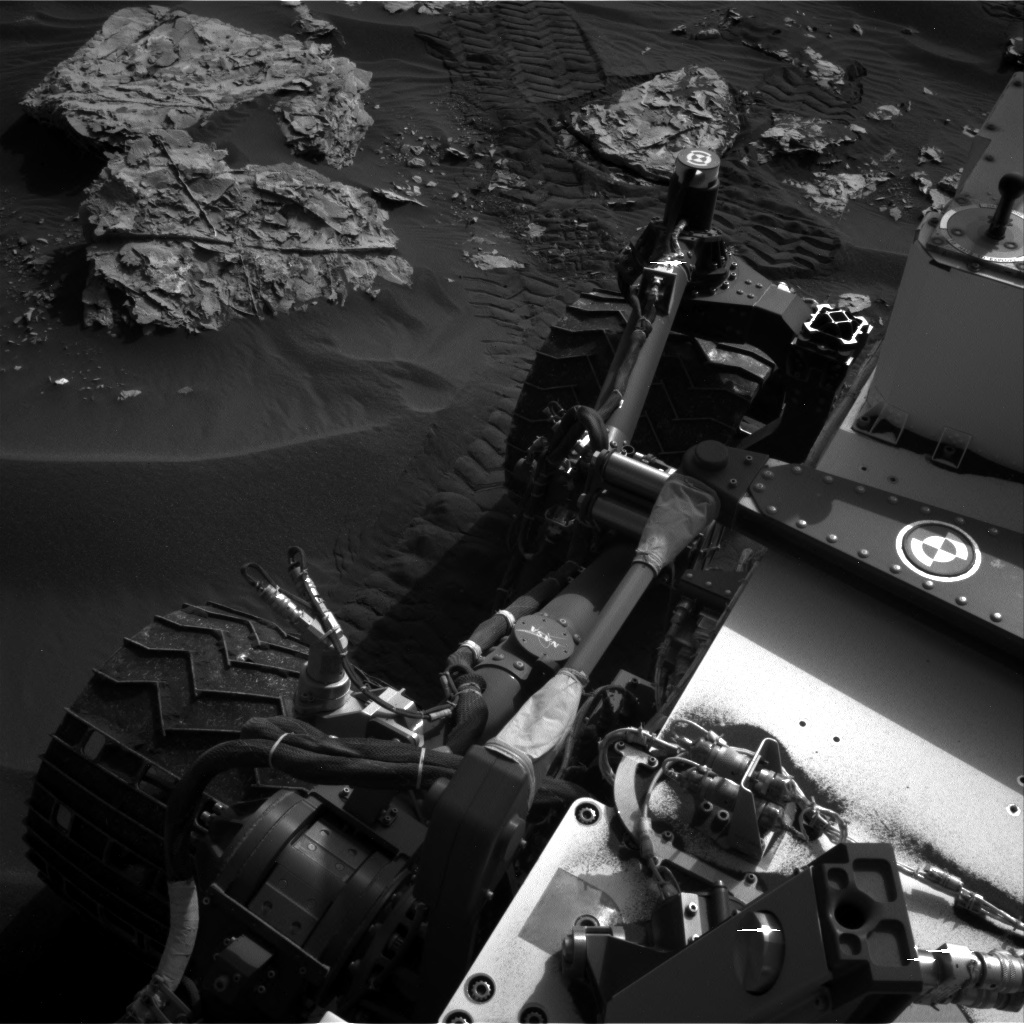 Curiosity has presented us with another beautiful workspace following a 16.6 meter drive.  The majority of this week's activities were focused on imaging Vera Rubin Ridge to observe its stratigraphic and structural relationship to the underlying Murray formation.  This weekend's plan is a bit of a deviation from that, as we will be making numerous measurements of the local Murray formation.  These "local" observations will be extremely valuable over the coming weeks, as Curiosity potentially transitions between two different geologic units (the Murray formation and Vera Rubin Ridge).  The nature of this transition will hold important clues into the origin of the ridge and the evolution of Gale Crater as a whole.

Curiosity will first use ChemCam to probe the composition of three rocky targets, followed by acquiring high-resolution Mastcam images to document the targets.  The first target, known as "Winter Harbor," is situated in front of the rover.  This target is a benign, flat, and finely layered piece of the Murray formation. Next, ChemCam will target "Beaver Dam Pond," which appears to be a block of the Murray formation that may have been tilted on its side. Curiosity will then point her mast just off her back right wheel, where ChemCam will investigate "Kitteredge Brook," which is a more plate-like and fractured block that appears to have a vein running through it.  Lastly, Mastcam will image one additional block of typical layered rock of the Murray formation known as "Crippens Brook."  The exposed layering of this target will help determine whether this section of the Murray formation is similar or different than previously analyzed locations.

After these remote observations, Curiosity will untuck her arm and engage in contact science with the "Winter Harbor" target.  First, the Dust Removal Tool will be used to brush away any surface dust.  Curiosity will then deploy APXS to the target, which uses the decay of the radioactive element curium to generate alpha particles and X-rays that interact with the surface material.  The energy recorded coming from the surface material as a result of these interactions holds important clues into the chemistry of the surface materials.  Curiosity will leave the APXS instrument in contact with "Winter Harbor" overnight to integrate its signal and to derive a precise measurement of the material's composition.

The next sol, Curiosity will investigate the chemistry of one more target ("Blunts Point," a wavy and fractured block) using ChemCam, take two contextual Mastcam images of this target, and take an additional three Mastcam images of a separate block slightly closer to the rover known as "Blunts Pond," which appears similar in texture to "Blunts Point."  Mastcam will then acquire a full multispectral image of "Winter Harbor" before departing this location to the east.

Curiosity will also take multiple environmental observations in this plan.  On Sol 1738, a morning imaging suite will be taken, which will include two Navcam cloud movies - a zenith movie looking directly above the rover and a supra-horizon movie looking towards the rim of Gale Crater.   Mastcam will capture tau and LOS measurements to assess the amount of dust in the atmosphere.  Later on Sol 1738, Mastcam will repeat the tau and LOS pair twice to determine diurnal variability in the atmospheric opacity.  The plan will also include MAHLI imaging of the REMS UV sensor to determine the amount of dust on the UV photodiodes, which is done approximately every 60 sols (for more on this periodic activity, see Sol 1674).   REMS and DAN measurements will be taken according to the usual cadence.

Curiosity will be an astronomer again in this plan as Mastcam will take images of both of Mars's moons, Phobos and Deimos.  Deimos imaging will assist in more accurately defining the moon's orbit, so is not constrained in timing during the night.  The imaging of Phobos will capture its ingress into the shadow of Mars - a Martian lunar eclipse.   This specific astronomical event occurs repeatedly at this time of year, but the timing of the imaging must be exact.  Imaging before the eclipse begins and during the ingress allows for an estimation of the size and amount of dust in the upper atmosphere of Mars.   This is possible because as eclipse begins, the light that is reflected off of Phobos must skim through the top of Mars's atmosphere first.  This light can then be compared to imaging before eclipse begins.   Repeating the Phobos observation at different times of year allows for probing of the atmosphere over different locations and at different altitudes due to the relative geometry changing.