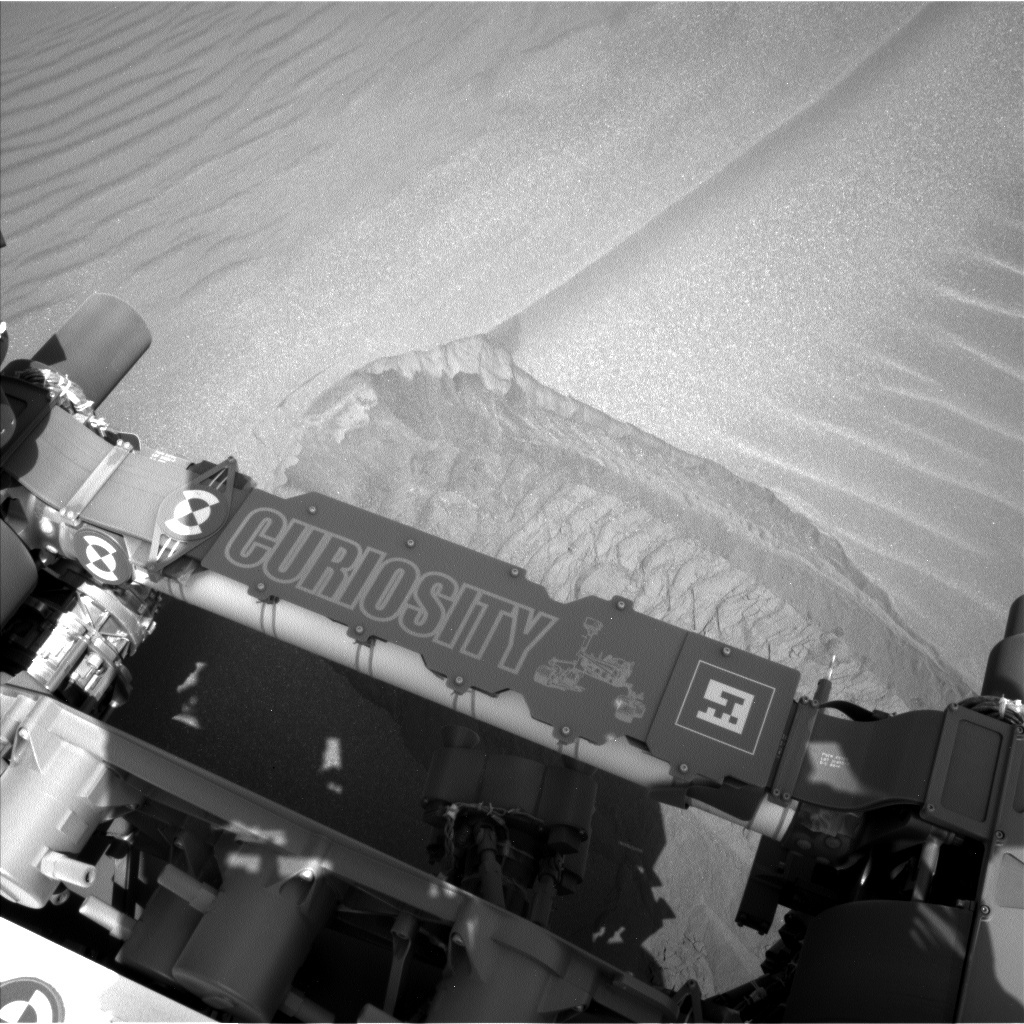 Curiosity has intentionally scuffed a nearby sand ripple, which has gifted the team with an exceptional view of the interior of these small sand deposits. The majority of the weekend's activities will consist of lots of targeted science on the scuff, as there is no nearby bedrock for Curiosity to observe. This is in contrast to the past week where quick documentation of local changes in stratigraphy of the bedrock as we drive closer to Vera Rubin Ridge was the priority.

Several targets were selected for observations around the scuff including the undisturbed ripple crest that is grayer with coarse grains, "Enchanted Island," the undisturbed ripple side that is redder and finer-grained, "Thomas Little Toes," and the wall of the scuff that cuts through the ripple, "Ile Damour." These targets will be imaged by MAHLI, with particular focus on imaging the wall of the scuff to detect any layering within the interior of the ripple that has been uncovered. APXS will perform extended integrations on Thomas Little Toes and Enchanted Island. Unfortunately, an APXS integration will not be performed on Ile Damour, and MAHLI will remain 5 cm away from this target to ensure safety of the instruments by not bringing the arm too close to the ripple at the risk of the side of the ripple collapsing. Mastcam will also image these areas for comparison of grain size, color, and composition to previously observed ripples. Finally, ChemCam will target Enchanted Island for comparison to two other ripple crest targets and Ile Damour to detect differences in grain size and composition in comparison to the targets on the ripple surface.

Two other areas along and near the crest of the un-scuffed ripple will be targeted by Mastcam and ChemCam. "Verona" is slightly away from the crest of the ripple, and "Merrymeeting Bay" is at the base of the ripple crest. These two additional targets were selected to compare differences in grain size and composition and detect changes in color across the surface of the ripple. An interesting wrinkle in planning was ordering the observations so that ChemCam activities on the wall of the scuff (the Ile Damour target) occurred after any imaging from MAHLI, in case actively shooting the fragile wall side disturbed or shifted the sand along the scuff wall.

Before the science activities with the arm, Curiosity will take a rather unusual selfie of sorts by pointing MAHLI directly into the eye of Mastcam to look at the Mastcam sunshade. This measurement is being taken to ensure that grains of sand are not interfering with Mastcam tau measurements.

Finally, Curiosity will drive away from the sand ripple to make some progress towards the next stop in the Vera Rubin Ridge imaging campaign before conjunction. Mastcam and Navcam will take standard post-drive imaging.

As ESTLK, I ensured that ENV also took a bevy of observations over the weekend. Navcam will take four observations for ENV. First, two different dust devil surveys will be taken to attempt to observe any nearby convective vortices. One of these surveys will take three consecutive images at each of three aims 120 degrees apart to capture a 360 degree field of view. A second 4-frame dust devil survey will take a pair of images at four pointings, each about 40 degrees apart. Second, a line-of-sight measurement directed towards the crater rim will be captured that is similar to the Mastcam LOS to allow for comparison between instruments. Third, a supra-horizon cloud movie will be taken, which is particularly important as we move into the time of year of the aphelion cloud belt, where high-level clouds become much more frequent. Mastcam will capture tau and LOS measurements to assess the amount of dust in the atmosphere. REMS will fit in 20 extended, hour-long blocks, including two HRIM (High Resolution Interval Mode for humid measurements) measurements, and DAN will take the usual passive and post-drive active measurements.