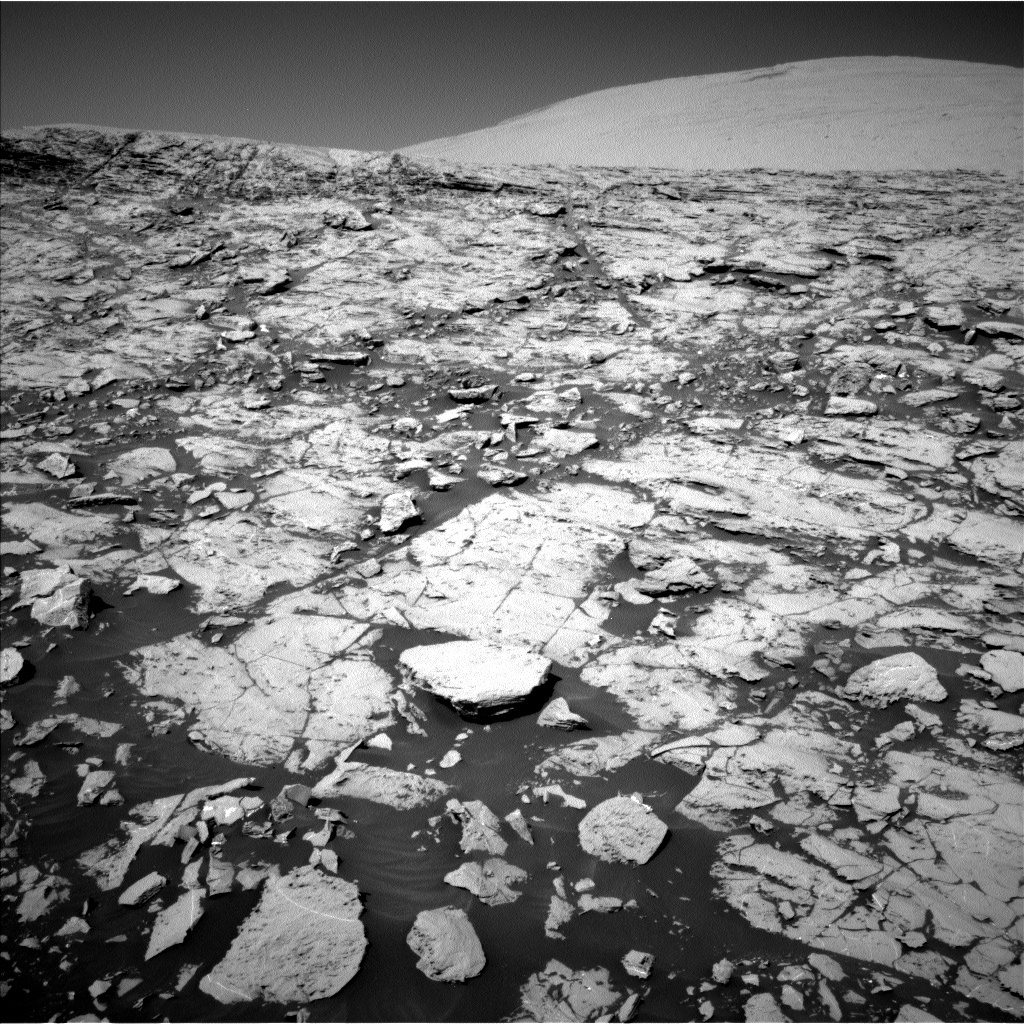 With apologies to Montgomery Scott, "we do not have the power...," but we will, as today was about keeping our state of charge up in preparation for possible CheMin activities in a near-future plan. Fortunately, that absolutely did not preclude a lot of terrific science and a drive.

Today was a touch-and-go sol. Contact science was planned on a dark-toned target named "Collingham" in the hopes that the darker color indicated either a different chemistry or reduced surface dust. APXS, MAHLI, ChemCam, and Mastcam will all cooperate on observing this target. Mastcam will continue the Vera Rubin Ridge imaging campaign by capturing a 13x1 mosaic of a prominent outcrop, named "Tra Tra," which is the large outcrop at the top left of the above Navcam image. (Mt. Sharp is to the right.) A stereo image will be taken to ascertain the geometry of the bedding. Curiosity then will drive about 11 meters towards the top of a nearby ridge. Post-drive Navcam imaging will be taken as well as an automated AEGIS imaging activity with ChemCam.

ENV accommodated the power-saving requirements of the plan by not performing any imaging and only including REMS and DAN activities. The normal cadence of REMS observations was also scaled back in such a way as to not degrade the ability to perform good science. ENV can ensure this flexibility by shuffling the placement of REMS extended blocks (EBs) from one sol to the next or dropping very low-priority EBs. (Note that EBs should not be confused with the top-of-the-hour 5-minute blocks that are always scheduled.) Though the EB observations themselves are not power intensive, the additional wake-up time to retrieve these data from REMS memory into rover memory so that they may be relayed to Earth (an activity appropriately called a REMS Get Data) can use considerable power if required at night, especially during the winter season. The number of these Get Datas in any given plan can be reduced by simply cutting back on the number of EBs. (For a typical cadence in a 1-sol plan, about three or four Get Datas are required.) ENV can reduce the impact of dropped EBs on science goals by deferring the dropped blocks to future plans. This adaptability can be achieved because the highest-priority EB cadence is designed to capture a full sol of environmental measurements every six sols-that is, there are four evenly spaced 1-hr blocks every sol that get pushed backward by one hour in the following sol. (I.e., Sol 1830 has blocks at 0300, 0900, 1500, and 2100, while Sol 1831 will have blocks at 0200, 0800, 1400, and 2000. And so on.) Capturing a full sol of environmental monitoring at a regular frequency is important to ensure that any localized atmospheric phenomena are not missed as Curiosity explores Gale Crater. Additional high-priority observations support other MSL experiments (e.g., during expected SAM drop-off or atmospheric intake times or Mastcam change detection experiments) and concurrent monitoring when THEMIS (Thermal Emission Imaging System) onboard Mars Odyssey or MCS (Mars Climate Sounder) onboard the Mars Reconnaissance Orbiter is observing Curiosity's location. These are impossible to postpone but occur at specific, pre-planned times. At medium priority are periodic HRIM (High Resolution Interval Mode for humidity)-or morning-EBs and a noon EB every sol that looks for pressure drops from small-scale vortices (like dust devils). At low-priority are migrating two-hour EBs to detect any meteorological changes that might last longer than the usual hour-long blocks. All of these EB observations are usually easy to fit in the plan because they do not require the rover to be awake; however, the accompanying Get Datas must occur when the rover is awake. If the timing of awake periods due to other activities, like a communications pass, does not line up with the required Get Datas, then low-priority blocks can be dropped altogether and/or high-priority blocks can be pushed to the following sols to reduce the number of requisite Get Datas in a plan. For example, in the Sol 1831 plan, the 0300 and the 0200 blocks will be captured. In this way, the number of Get Datas and the ENV power requirements in a given plan are reduced, and a full sol of observations can still be taken within the six-sol goal.