NASA's strategy for scientific investigations on Mars is to "seeks signs of life."
Download full image ›

Goal 1: Determine whether life ever existed on Mars

The mission of the Mars 2020 Perseverance rover focuses on surface-based studies of the Martian environment, seeking preserved signs of biosignatures in rock samples that formed in ancient Martian environments with conditions that might have been favorable to microbial life.

It is the first rover mission designed to seek signs of past microbial life. Earlier rovers first focused on and confirmed that Mars once had habitable conditions.

Scientists will determine if environmental conditions at the Mars 2020 landing site on Mars were ever capable of supporting microbial life. The landing site that is eventually chosen might include layers of rock where once flowed or stood, as portrayed in this artist's concept.
Download full image ›

Goal 2: Characterize the Climate of Mars

Past Martian climate conditions are a focus of the Perseverance rover mission. The rover's instruments are looking for evidence of ancient habitable environments where microbial life could have existed in the past. 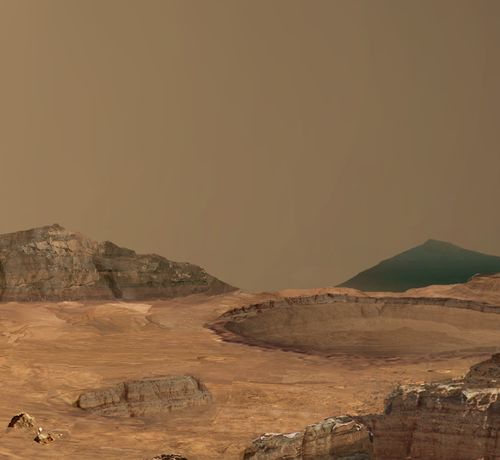 Layers of rock in craters and mountains, as shown in this artist's concept, contain a record of the geologic past on Mars.
Download full image ›

Goal 3: Characterize the Geology of Mars

The Perseverance rover is designed to study the rock record to reveal more about the geologic processes that created and modified the Martian crust and surface through time. Each layer of rock on the Martian surface contains a record of the environment in which it was formed. The rover seeks evidence of rocks that formed in water and that preserve evidence of organics, the chemical building blocks of life.

The challenge of future human exploration of Mars drives the development of new capabilities that would support astronauts traveling to and from, and surviving on the Red Planet.
Download full image ›

The Perseverance rover is demonstrating key technologies for using natural resources in the Martian environment for life support and fuel. It is also monitoring environmental conditions so mission planners understand better how to protect future human explorers.

This science goal relates to national space policy for sending humans to Mars in the 2030s. Similar to the history of the exploration of Earth's moon, robotic missions to Mars provide a crucial understanding of the environment and test innovative technologies for future human exploration.

[more on Goal 4 for the entire Mars Exploration Program]