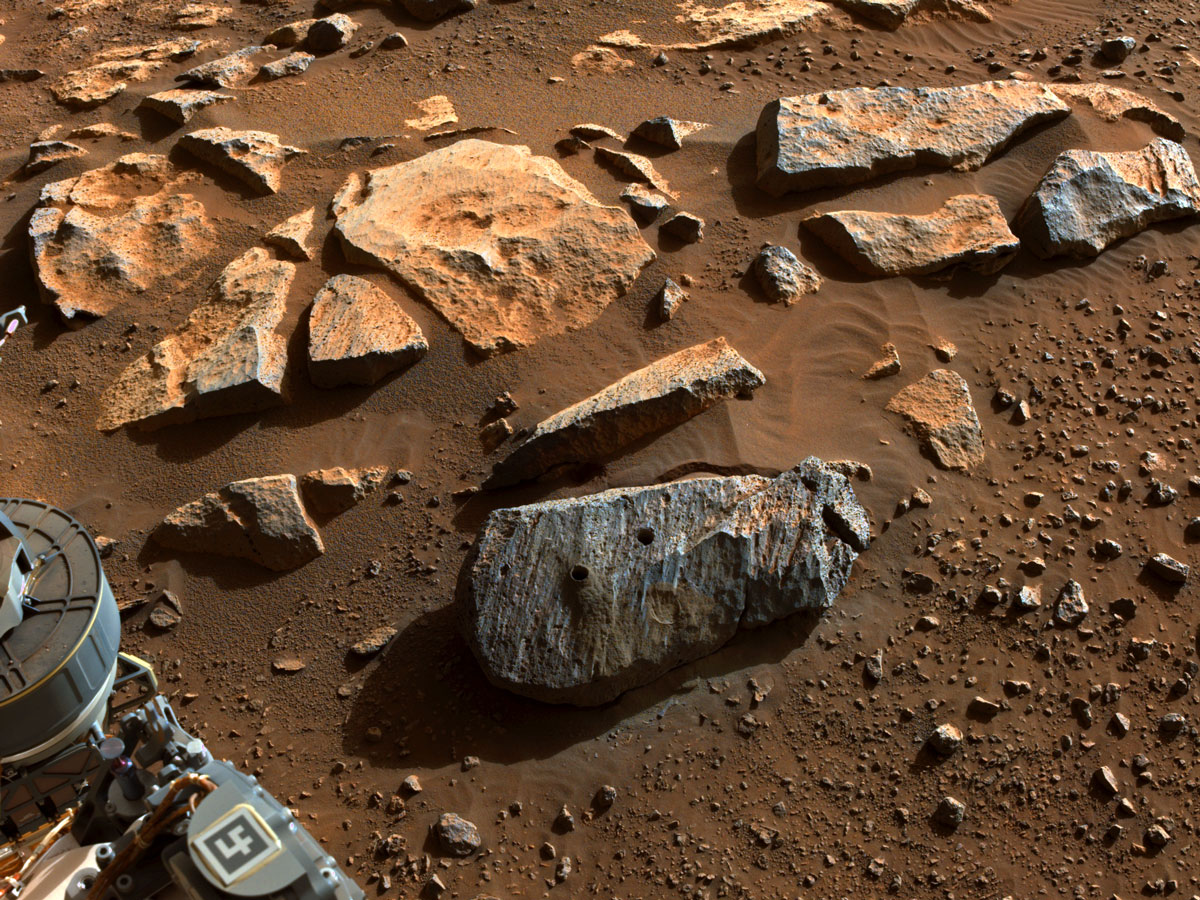 'Rochette' After Perseverance Sampling: This image taken by NASA's Perseverance rover on Sept. 7, 2021, PDT (Sept. 8, EDT), shows two holes where the rover's drill obtained chalk-size samples from rock nicknamed "Rochette."  Credits: NASA/JPL-Caltech. Download image ›
Exactly one month after receiving the “no sample collected” result at Roubion, data from Perseverance confirmed the successful completion of the acquisition and processing of its first rock sample – the first ever on Mars! Once again, the sampling system executed the end-to-end activity without a fault. Unlike the experience in the crumbly Roubion rock, this time the volume measurement confirmed a full-length core approximately 6 centimeters (2.4 inches) long and the bottom of the core inside its sample tube was clearly visible in the CacheCam images. This core, named Montdenier, is sealed within sample tube number 266 and in storage inside Perseverance waiting for its chance to be part of a return trip to Earth.

What a month it’s been!

Shortly after the investigation at Roubion determined that the unique characteristics of this specific rock likely prevented collection, we set off to find a rock better suited to coring. Ken Farley’s blog on Roubion describes the characteristics and clues that foreshadowed our difficulty in collecting a core there and the strategy for selecting the next rock for sampling.

A rock called Rochette was selected as the next candidate for sampling for both its scientific value and to test the idea that Roubion was just a poorly behaved rock. Abrading the surface layer on Rochette revealed a rock with alteration but to a lesser extent than Roubion. We were GO for the next coring attempt.

To give ourselves some additional flexibility to react to the results this time around we paused to visually confirm the presence of a core in the tube before commanding tube processing. On September 1, we gathered at 10:30 pm Pacific to await the pictures that would give us our first look at the acquisition performance. Success! We could clearly see an intact core in the tube after the coring activity supporting the assertion that Roubion was indeed a crumbly rock. The Montdenier result was well-aligned with our successful Earth-based testing.

After getting the first sample under our belt, we immediately collected a second “paired” sample of Rochette, at a target called Montagnac, once again running the sampling system autonomously end-to-end as intended. Another full-length core was acquired, sealed, and stored. While initially elusive, this was the result we had so eagerly anticipated. Collecting two cores from Rochette is a huge milestone for both the mission and its team members. The first leg of our sample return mission is fully underway. We needed both perseverance and patience to collect, process, and store our first two rock cores on Mars. But in the end the feeling was one of pure joy!