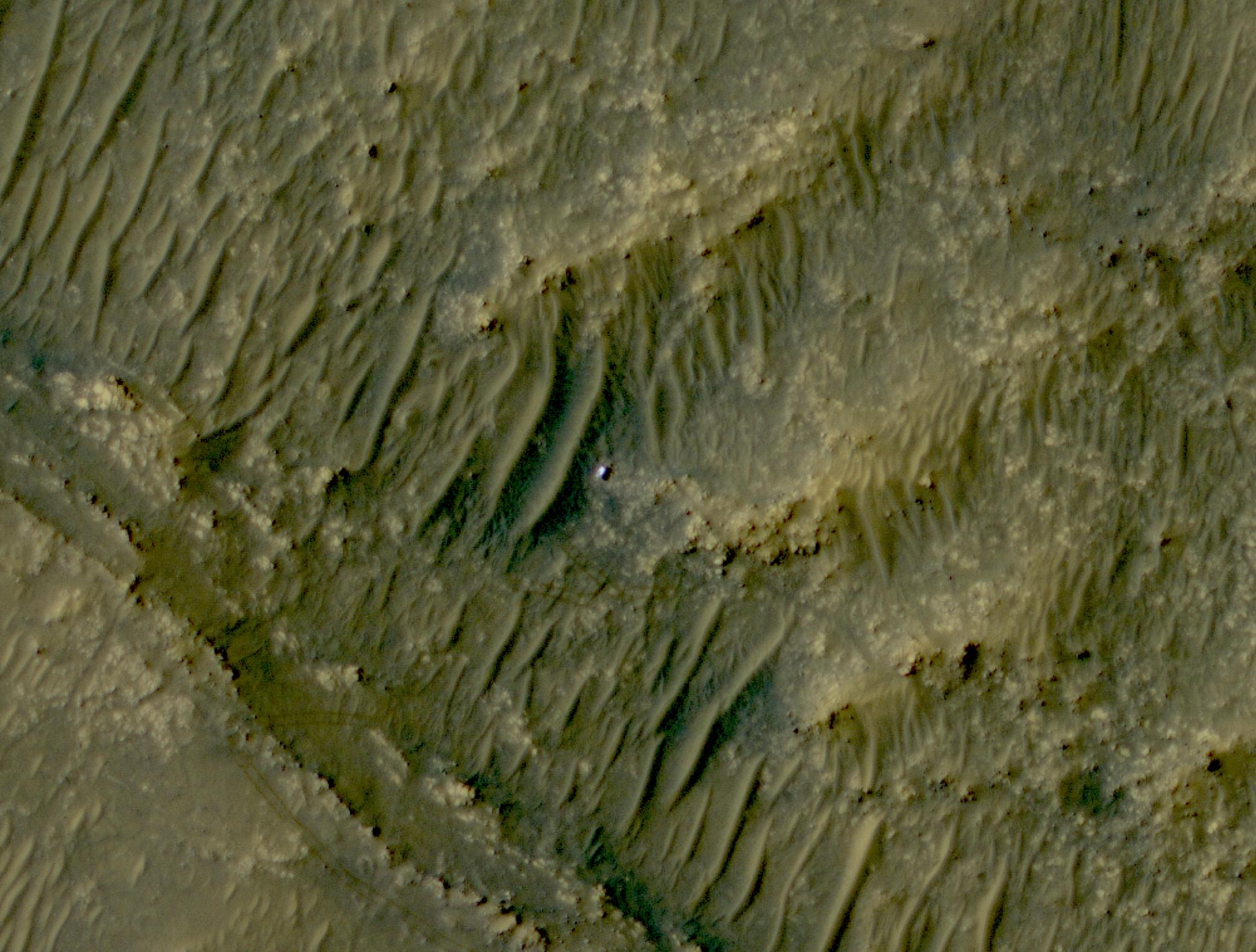 HiRISE Spots Perseverance in 'South Séítah': The white dot in the centre is our beloved Perseverance rover, dwarfed by the large sand dunes in the Séítah region. This image was acquired on September 24th, 2021, by the High-Resolution Imaging Science Experiment on the Mars Reconnaissance Orbiter. Credits: NASA/JPL-Caltech/University of Arizona. Download image ›

When your vehicle is well over 50 million kilometers away from the nearest tow company, getting your wheels stuck in sand can be a mission-critical problem. Such a predicament ended the Spirit rover’s mission in 2009.

Yet Perseverance is currently winding her way through the maze of towering sand dunes that characterize the Séítah region of Jezero crater (“Séítah” means "amidst the sand" in the Navajo language, a well-fitting name). A recent photo beamed back from the HiRISE camera (High-Resolution Imaging Science Experiment) on the Mars Reconnaissance Orbiter shows the extent to which the nearby dunes dwarf the rover, which itself is the size of a small SUV.

What enticed the Science Team into this treacherous zone laden with sand traps? The answer lies in our observations. After Perseverance landed and turned her eyes (cameras) towards Séítah, the Science Team was treated to a compelling view of diversely layered rocks. We saw thin layers and thick layers, planar layers and tilted layers, featureless layers and layers with protrusions. These observations garnered excitement amongst us because we know, from studying Earth, that an outcrop of layered rocks serves as a geological time-line. Each layer records information about the environmental conditions present when the rock formed and changes in layer thicknesses or textural expressions indicates an environmental change. Further, by studying the directions that the layers tilted, we determined that the rocks of Séítah are likely the most ancient rocks exposed in all of Jezero crater. Séítah therefore represents the beginning of the accessible geologic record and offers a once-in-a-mission opportunity to explore the full breadth of landscape evolution.

However, from a distance, it is difficult to determine what that evolving landscape actually looked like. Numerous hypotheses have been proposed for the origin of the layered rocks in Séítah, including sedimentation in an ancient lake or river with varying flow energy, airfall of volcanic ash, airfall of material dislodged by an impact event, cooled lava flows, or a magmatic intrusion. Each one of these possibilities carries with it a (very) different interpretation of how habitable Jezero crater was in the deep past and deciphering which scenario is most correct requires a closer look.

Which is why we braved the sand. As of this writing, the rover is parked in front of one of the captivating layered rocks that we spied from a distance, informally named Brac. On sol 253 (November 5th, 2021, Earth time) Perseverance reached out and used the abrader drill bit and the Gaseous Dust Removal Tool to scrape a few millimeters of rock off the surface of Brac to expose the fresh, un-weathered surface for study. The Science Team is currently poring over the images and planning follow up analyses that will bring us one step closer to unraveling how these rocks formed and whether that environment could have been favourable for life. 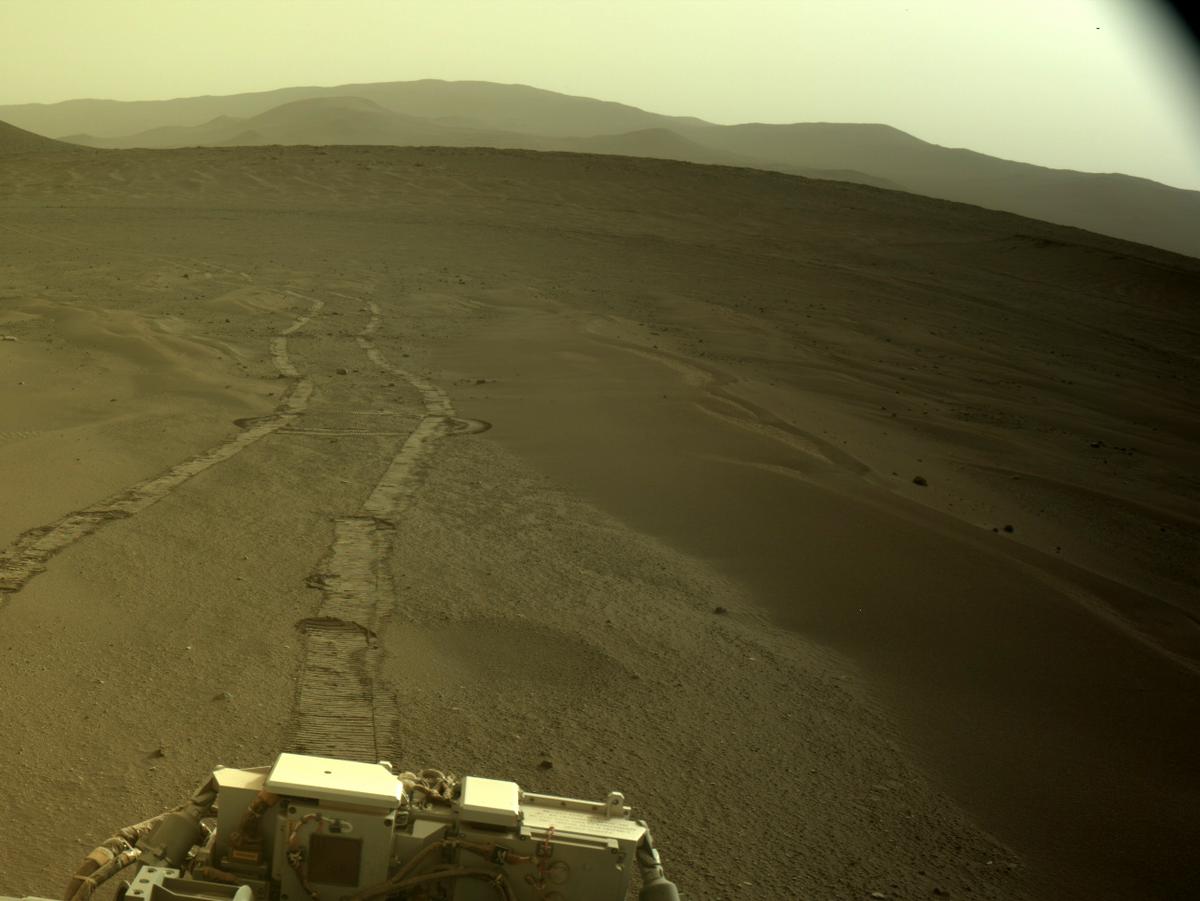 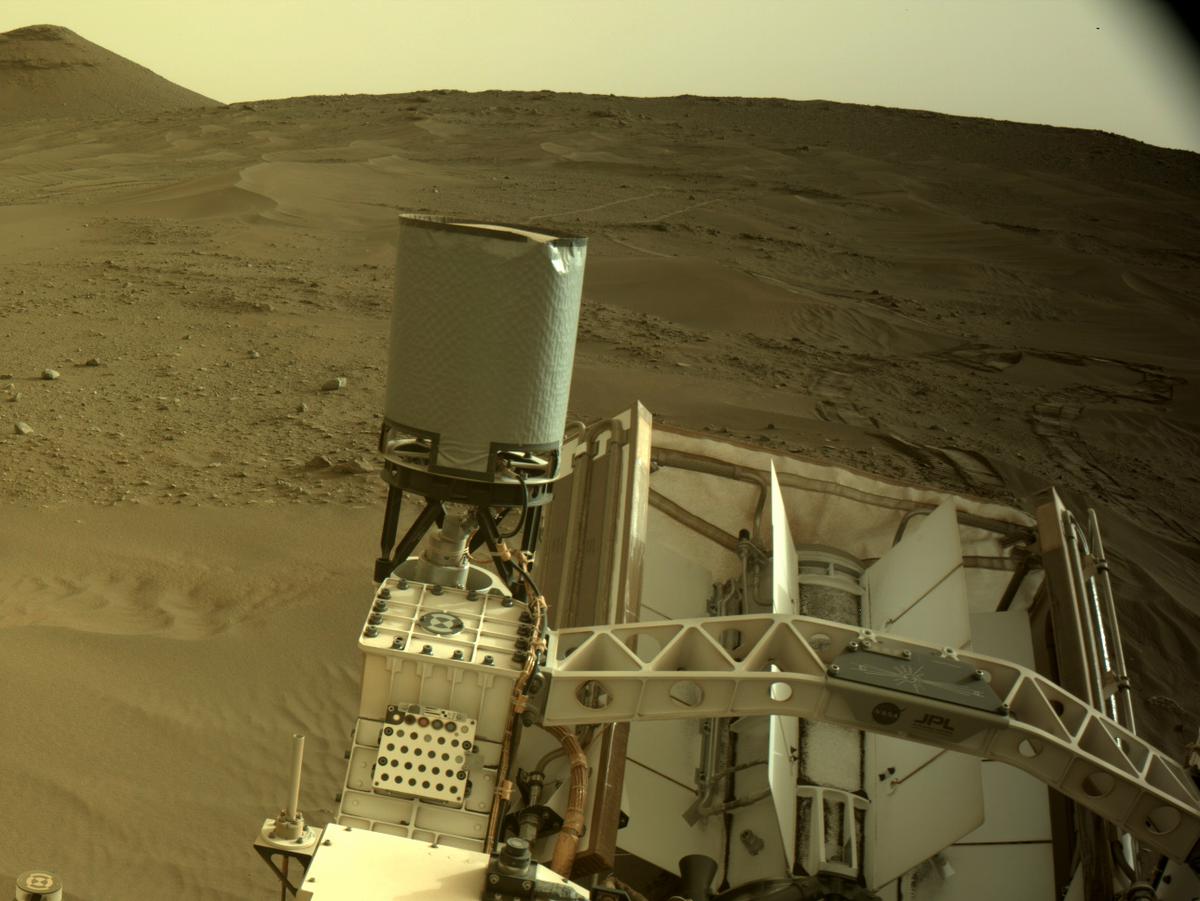 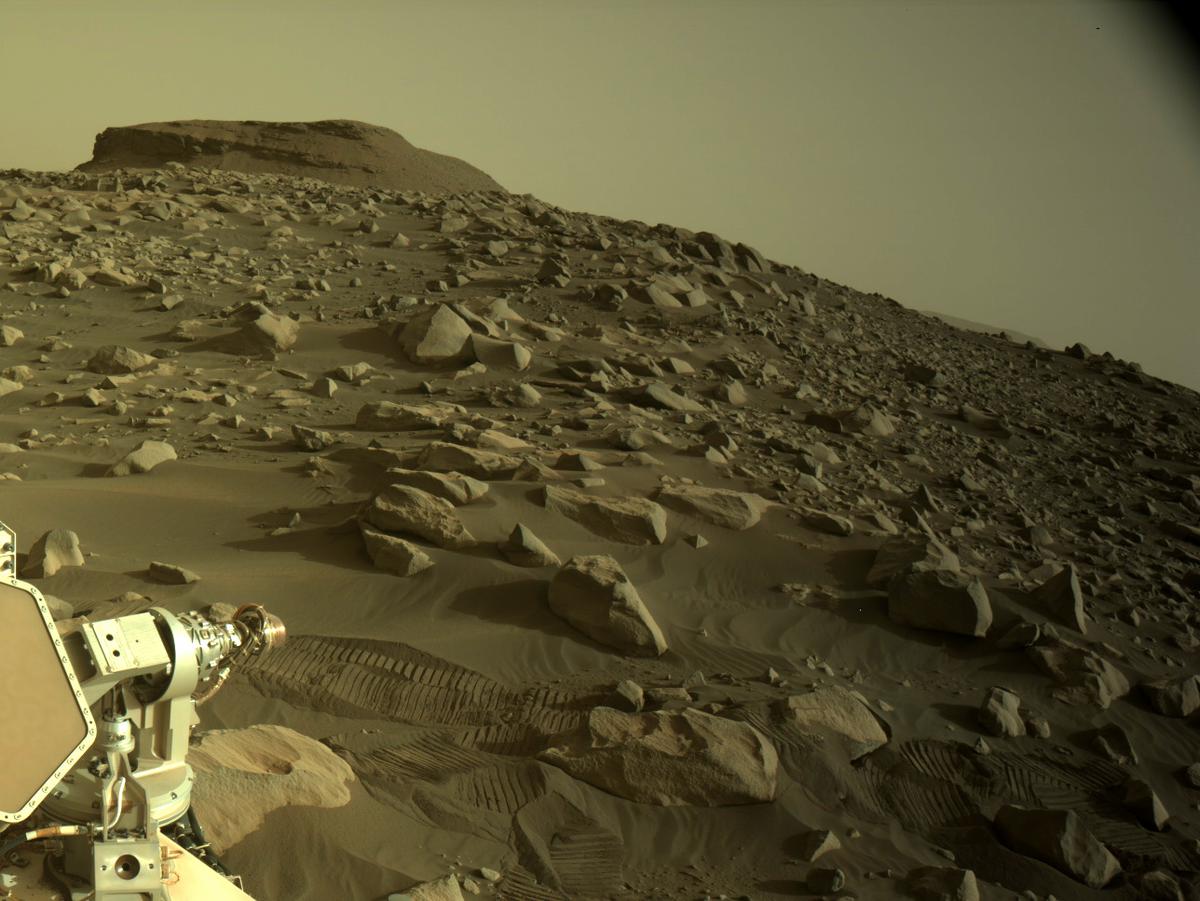 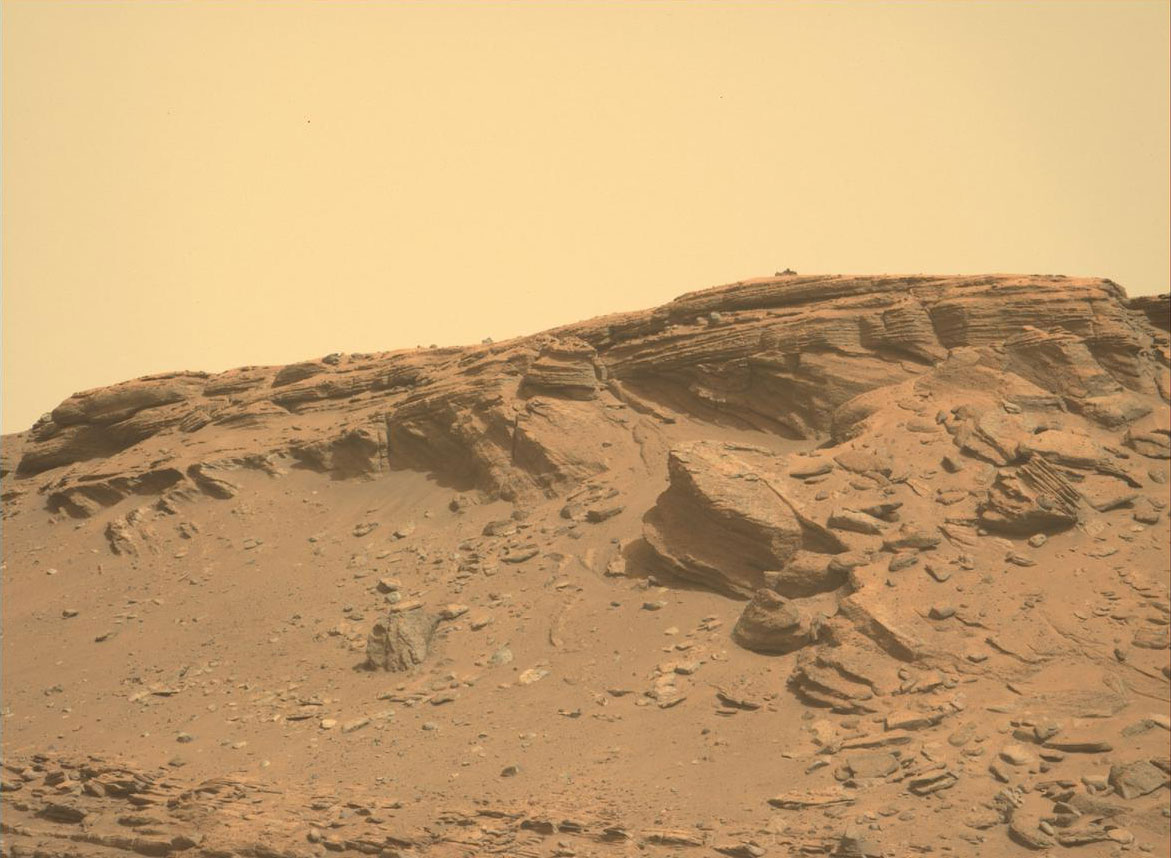 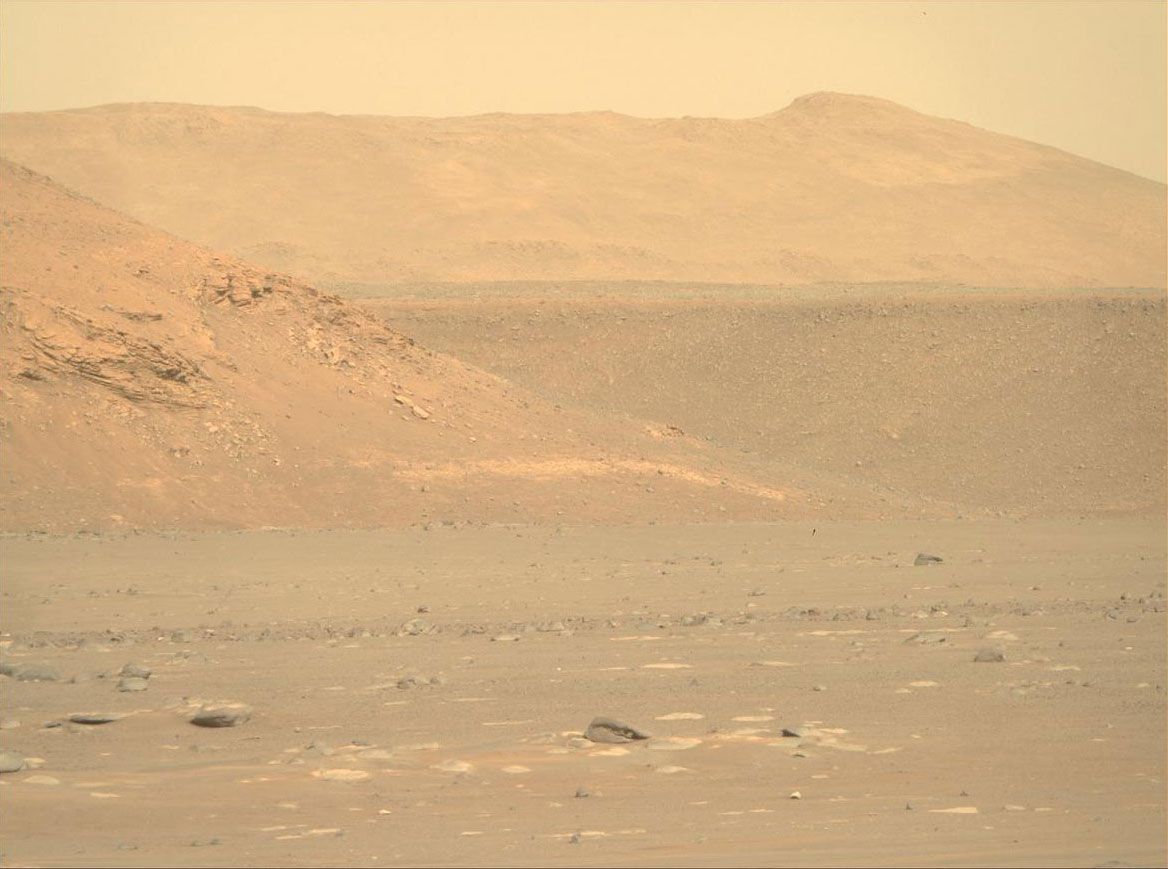 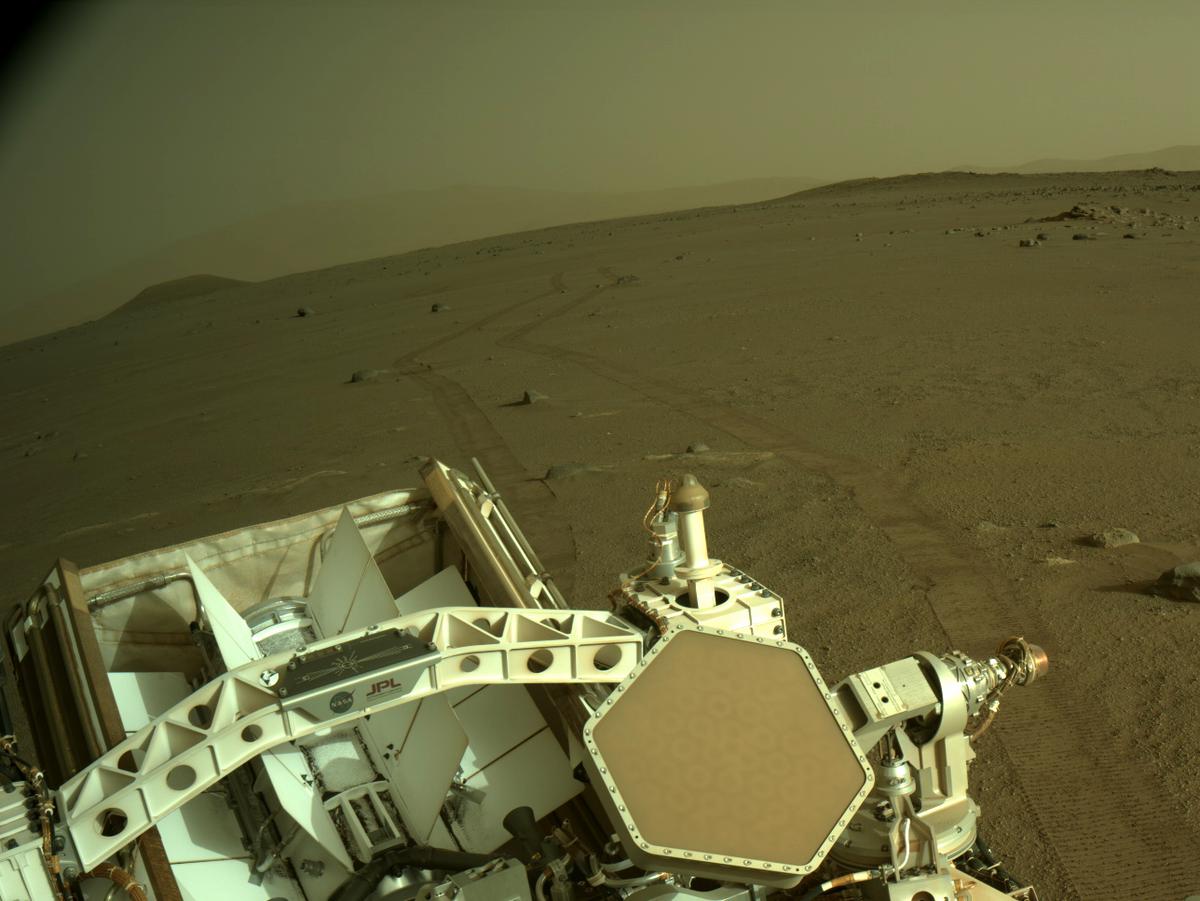 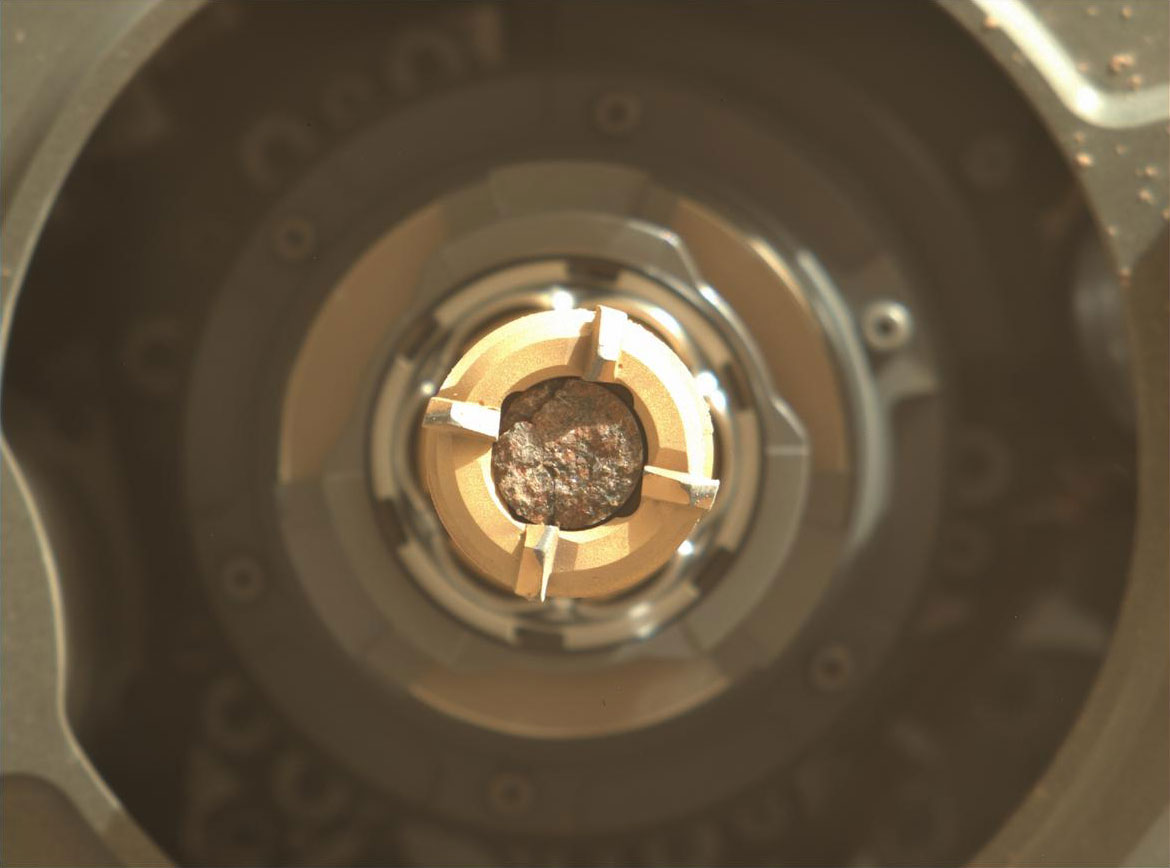 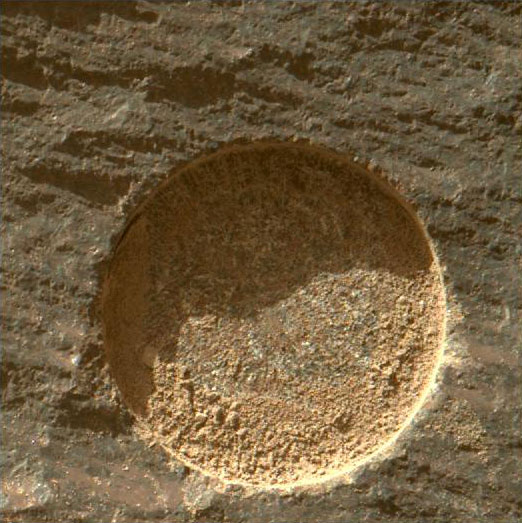