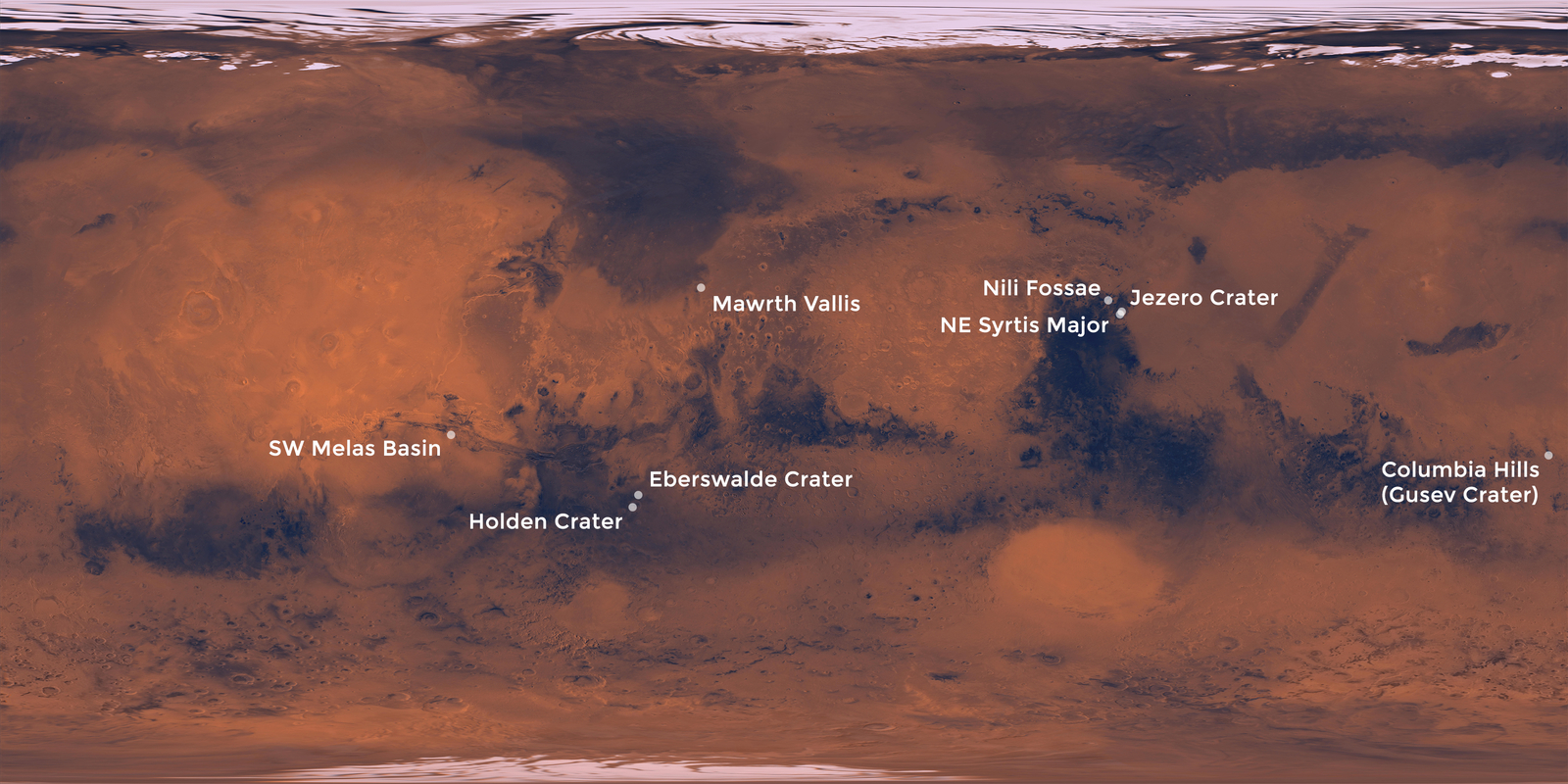 In an August 2015 workshop, scientists chose eight places to study more as potential landing sites for the Mars 2020 rover. How do they decide? They asked two main questions:

Looking for Places on Mars with Signs of Past Water

Water once flowed or stood in many places on Mars. Scientists want to send the Mars 2020 rover to one of them.

Why is it important to send the rover to a place that used to be wet? Water is essential for the basic chemical processes that lead to and sustain life. For scientists, the best place for the rover to go is one where water drenched the land for a long time in Mars' past history.

Discoveries of weird life forms on Earth have broadened the ideas that scientists have about life that could have once existed on Mars. For example, there are microbes on Earth that thrive around volcanic vents at the bottom of the sea. These microbes don't need photosynthesis for energy. Instead, they use chemical energy from methane or carbon dioxide molecules. Could Mars have been home to similar forms of life?

Scientists and engineers evaluated these eight landing sites. Some of these formerly watery places were created by bubbling underground springs. Others were created by rain-fed rivers that filled craters. 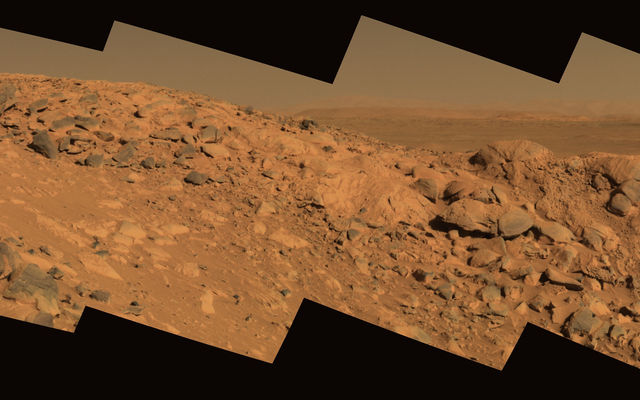 Mineral springs once burbled up from the rocks of Columbia Hills. The discovery that hot springs flowed here was a major achievement of the Mars Exploration Rover, Spirit. The rover's discovery was an especially welcome surprise because Spirit had not found signs of water anywhere else in the100-mile (160-kilometer)-wide Gusev Crater. After the rover stopped working in 2010, studies of its older data records showed evidence that past floods that may have formed a shallow lake in Gusev. 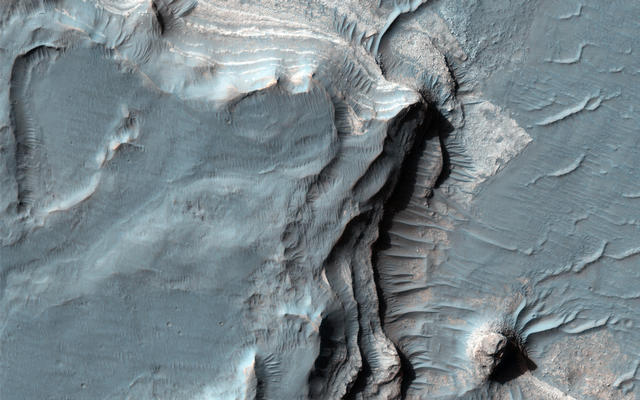 Eberswalde: A Delta Within a Delta

A big body of water left behind dried lake-bottom deposits in this crater. The crater was a top landing site candidate for the Mars Exploration Rovers. Scientists still favor this location because it contains an ancient delta at the foot of a Martian river. Deltas only form in places where water existed over long periods of time. A well-preserved network of water-flow features exists here, including winding stream channels and riverbeds. Water-deposited sediments hardened in these streambeds and they have resisted erosion by the wind. As a result, many of the streambeds here are higher than surrounding terrain. Reactions between water and volcanic rock created the clays found here. Clay minerals are an important sign of a watery past. They also have the potential to preserve any signs of life for a long time. 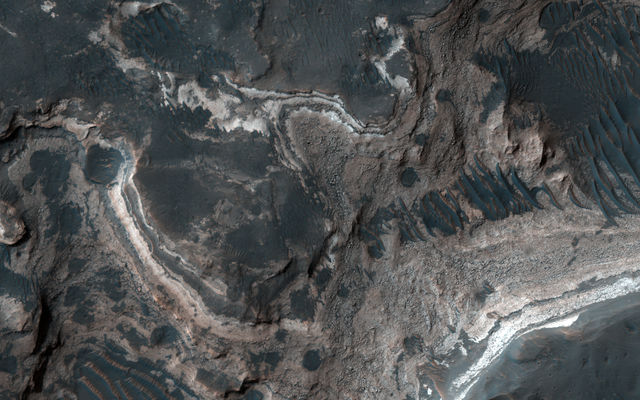 Violent impacts and fluid flows blasted and carved Holden Crater. Scientists have flagged the old impact crater as a place that could have had habitable conditions for microbial life. Minerals here formed in a body of water the size of Lake Huron. At some point, the rim of the water-swollen crater gave way, probably during a great flood. Water flowing out of the broken crater rim swept away layers of sediment and revealed even older clay sediments from another, earlier lakebed. That older lake could have existed for thousands of years, long enough for microbial life to take hold. The clays have the potential to preserve signs of life. 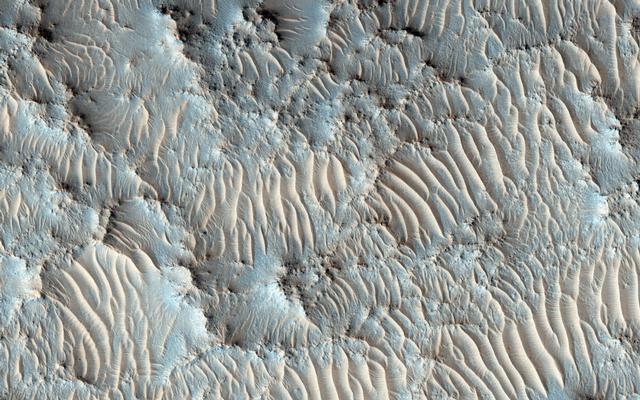 Jezero Crater tells a story of the on-again, off-again nature of the wet past of Mars. Water filled and drained away from the crater on at least two occasions. More than 3.5 billion years ago, river channels spilled over the crater wall and created a lake. Scientists see evidence that water carried clay minerals from the surrounding area into the crater after the lake dried up. Conceivably, microbial life could have lived in Jezero during one or more of these wet times. If so, signs of their remains might be found in lakebed sediments. 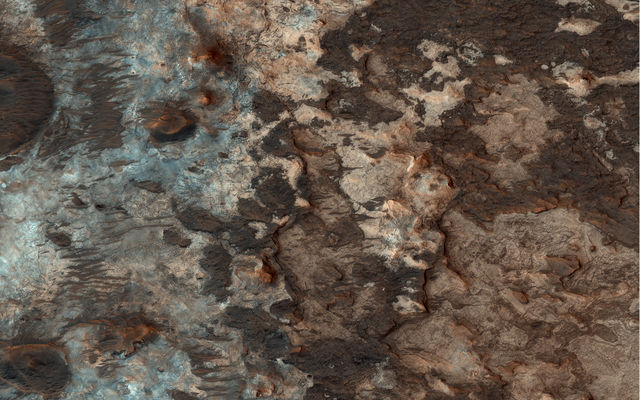 Orbiting spacecraft take pictures that show the sources of Martian river channels. The pictures give scientists a good idea of how water once filled ancient lakes. That's not the case with Mawrth Vallis. The valley shows plenty of evidence of minerals altered by water, but the minerals don't show where the water came from. A mysterious channel emerges out of nowhere. The channel is not linked to runoff from higher areas. Scientists think that the water that created the channel seeped from beneath the surface. Regardless of the water's source, the channel excavated the clay deposits. Those clay deposits may preserve evidence of past microbial life. 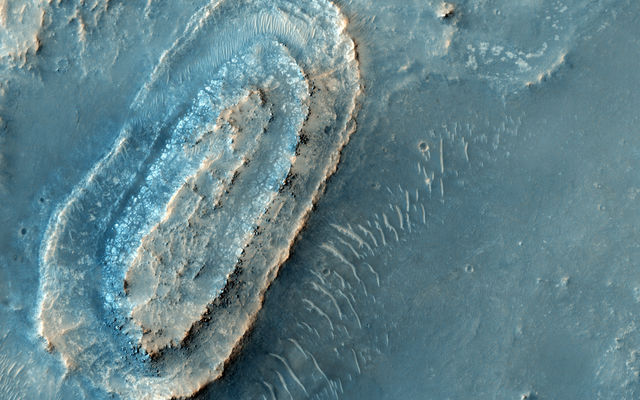 NE Syrtis: Once Warm, and Wet

Volcanic activity once warmed NE Syrtis. Underground heat sources made hot springs flow and surface ice melt. Microbes could have flourished here in liquid water that was in contact with minerals. The layered terrain of NE Syrtis holds a rich record of the interactions that occurred between water and minerals over successive periods of early Mars history. 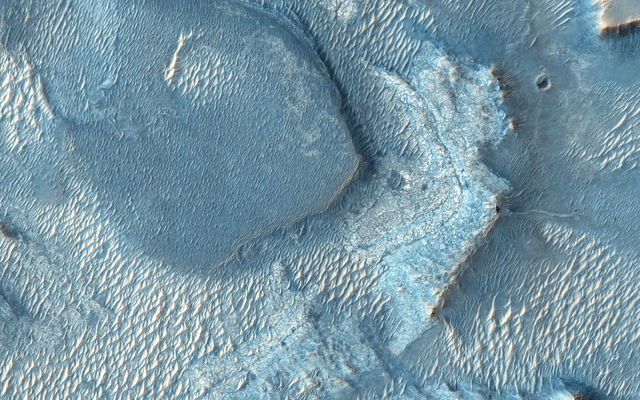 Nili Fossae: A Splashy Array of Minerals and a Dash of Methane

Big forces of nature shaped Nili Fossae. Impacts hammered its surface. Shifting tectonic faults caused great blocks of the surface to drop and form valleys. The water altered chemicals and minerals in the rocks here, producing clays and rocks with large amounts of silica. Geologists want to find out if those changes include signs of past life. Earth-based telescopes have detected hints of possible methane in the atmosphere near Nili Fossae. Methane can come from natural geologic processes (e.g., volcanics) or from living organisms. Scientists would like to know the source of that methane. 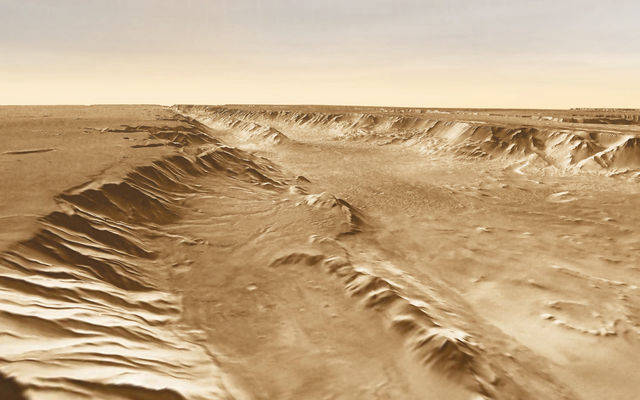 SW Melas: Part of the Largest Canyon in the Solar System

What lies in the layers of the lakebed and shores of ancient SW Melas? A lake or delta once sat in this basin. Its water interacted with the wide variety of minerals that exist in the surface. There are layers of volcanic ash interspersed with clays. The clays, formed from eroded rock particles were laid down by water. This formerly watery, volcanic environment may preserve signs of past microbial life.

Key Questions for Deciding on the Mars 2020 Rover's landing Site

Potential landing sites for the Mars 2020 rover could change as mission science and engineering considerations evolve. Ultimately, NASA will choose a place with a history of liquid water that also meets the Mars 2020 mission landing site criteria: