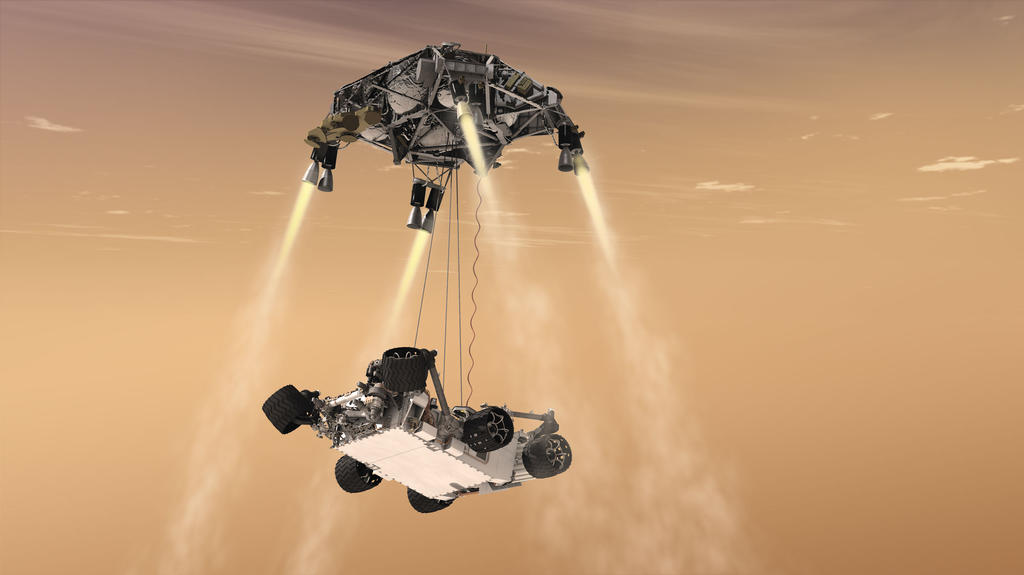 This artist's concept shows the sky crane maneuver during the descent of NASA's Curiosity rover to the Martian surface.

The entry, descent, and landing (EDL) phase of the Mars Science Laboratory mission begins when the spacecraft reaches the Martian atmosphere, about 81 miles (131 kilometers) above the surface of the Gale crater landing area, and ends with the rover Curiosity safe and sound on the surface of Mars.

Entry, descent, and landing for the Mars Science Laboratory mission will include a combination of technologies inherited from past NASA Mars missions, as well as exciting new technologies. Instead of the familiar airbag landing systems of the past Mars missions, Mars Science Laboratory will use a guided entry and a sky crane touchdown system to land the hyper-capable, massive rover.

The sheer size of the Mars Science Laboratory rover (over one ton, or 900 kilograms) would preclude it from taking advantage of an airbag-assisted landing. Instead, the Mars Science Laboratory will use the sky crane touchdown system, which will be capable of delivering a much larger rover onto the surface. It will place the rover on its wheels, ready to begin its mission after thorough post-landing checkouts.

The new entry, descent and landing architecture, with its use of guided entry, will allow for more precision. Where the Mars Exploration Rovers could have landed anywhere within their respective 93-mile by 12-mile (150 by 20 kilometer) landing ellipses, Mars Science Laboratory will land within a 12-mile (20-kilometer) ellipse! This high-precision delivery will open up more areas of Mars for exploration and potentially allow scientists to roam "virtually" where they have not been able to before.

In the depicted scene, the spacecraft's descent stage, while controlling its own rate of descent with four of its eight throttle-controllable rocket engines, has begun lowering Curiosity on a bridle. The rover is connected to the descent stage by three nylon tethers and by an umbilical providing a power and communication connection. The bridle will extend to full length, about 25 feet (7.5 meters), as the descent stage continues descending. Seconds later, when touchdown is detected, the bridle is cut at the rover end, and the descent stage flies off to stay clear of the landing site.

The Mars Science Laboratory spacecraft is being prepared for launch during Nov. 25 to Dec. 18, 2011. Landing on Mars is in early August 2012. In a prime mission lasting one Martian year (nearly two Earth years) researchers will use the rover's tools to study whether the landing region has had environmental conditions favorable for supporting microbial life and for preserving clues about whether life existed.

More information about Curiosity is at http://mars.jpl.nasa.gov/msl/ .
Image Credit: NASA/JPL-Caltech