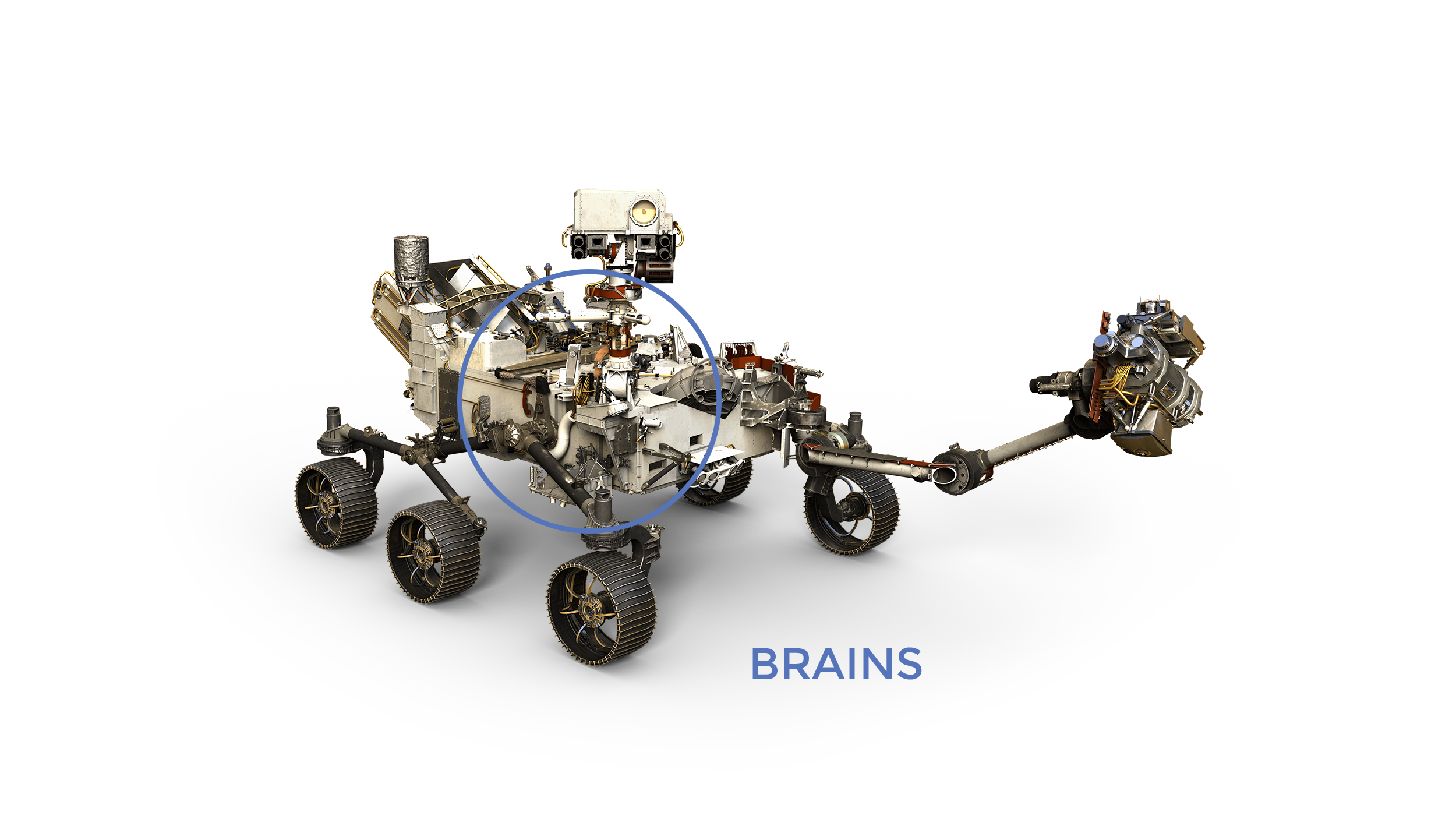 Unlike people and most animals, the rover's brains - its computer - are in its boxy body. The computer module is called the Rover Compute Element (RCE) - there are actually two identical RCEs in the body so there is always a spare "brain."

The Rover Compute Element interfaces with the engineering functions of the Perseverance rover over two networks which follow an aerospace industry standard designed especially for the high-reliability requirements of airplanes and spacecraft. In addition, the RCEs have a special purpose to direct interfaces with all of the rover instruments for exchange of commands and science data.

Better Memory Than Ever

The computer contains special memory to tolerate the extreme radiation environment that exists in space and on the Martian surface.

"Nerves" for balance and position

The Perseverance rover carries an Inertial Measurement Unit (IMU) that provides 3-axis information on its position, which enables the rover to make precise vertical, horizontal, and side-to-side (yaw) movements. The device is used in rover navigation to support safe traverses and to estimate the degree of tilt the rover is experiencing on the surface of Mars.

Just like the human brain, the rover computers register signs of health, like temperature and power levels, along with other features that keep the rover "alive." This main control loop constantly checks systems to ensure that the rover is both able to communicate throughout the surface mission and that it remains thermally stable (not too hot or too cold) at all times. It does so by periodically checking temperatures, particularly in the rover body, and adjusting temperature control accordingly; and then recording power generation and power storage data throughout the Mars sol (a Martian day) to decide what new activities can be started or completed; and then finally scheduling and preparing for communication sessions with Earth or with local Mars orbiters.

Using its "computer brains" for exchanging information with the team

Activities such as taking pictures, driving, and operating the instruments are performed under commands transmitted in a command sequence to the rover from the flight team back on Earth.

Perseverance generates constant engineering, housekeeping and analysis telemetry and periodic event reports that are stored for eventual transmission once the flight team requests the information from the rover.

The rover has two "computer brains," one of which is normally asleep. In case of problems the other computer brain can be awakened to take over control and continue the mission.