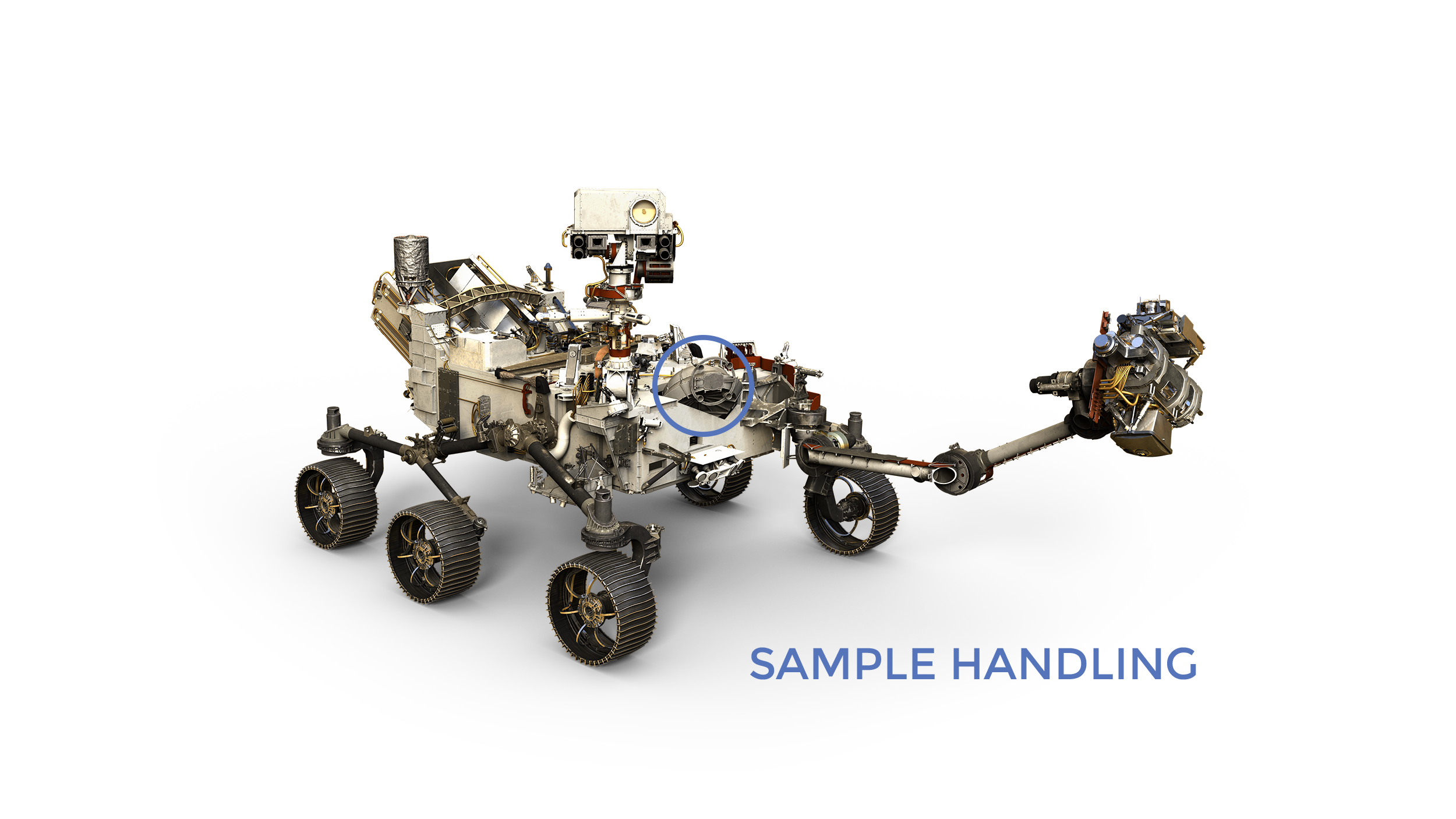 The Perseverance rover will gather samples from Martian rocks and soil using its drill. The rover will then store the sample cores in tubes on the Martian surface. This entire process is called "sample caching".

Mars 2020 will be the first mission to demonstrate this on Mars. It could potentially pave the way for future missions that could collect the samples and return them to Earth for intensive laboratory analysis.

The three major steps in sample handling are:

A big job for the rover is collecting carefully selected samples of Mars rock and soil. These samples will be sealed in tubes and left in a well-identified place, or more than one spot, on the surface of Mars. Detailed maps will be provided for any future mission that might go to Mars and pick up these samples for study by scientists.

Sampling Equipment in the Rover Belly

The belly of the rover houses all the equipment and supplies needed to collect samples. It contains a rotating drill carousel, which is a wheel that contains different kinds of drill bits. Next to that are the 43 sample tubes waiting to be filled.

While the rover’s big arm reaches out and drills rock, the rover belly is home to a small robotic arm that works as a "lab assistant" to the big arm. The small arm picks up and moves new sample tubes to the drill, and transfers filled sample containers into a space where they are sealed and stored.

Perseverance must meet extraordinary cleanliness requirements. These measures are in place to avoid contaminating Martian samples with terrestrial contaminants that may inadvertently be brought from Earth. Strict rules limit the amount of inorganic, organic and biological materials from Earth in the rover and its sample handling system.

Perseverance carries five "witness tubes" along with sample collection tubes. The witness tubes are similar to the sample tubes except they are pre-loaded with a variety of witness materials that can capture molecular and particulate contaminants, such as:

In the future, if the Perseverance samples are returned to Earth for analysis, the witness tubes will show whether Earth contaminants were present during sample collection. This will help scientists tell which materials in the Martian materials may actually be of Earth origin.

After a sample is collected, the sample tube is transferred back to the rover's belly. There, it is handed off to the small interior robotic arm and moved to inspection and sealing stations. Once the tube is hermetically sealed, nothing can enter or leave it. The tubes are stored in the rover belly until the team decides on the time and place to drop the samples off on the surface.

STEP 3: Depositing Samples on the Surface

At a time and place of the team's choosing, the samples are deposited on the surface of Mars at a spot that the team designates as a "sample cache depot." The depot location or locations must be well-documented by both local landmarks and precise coordinates from orbital measurements. The cache of Mars samples remains at the depot, available for pickup and potential return to Earth.