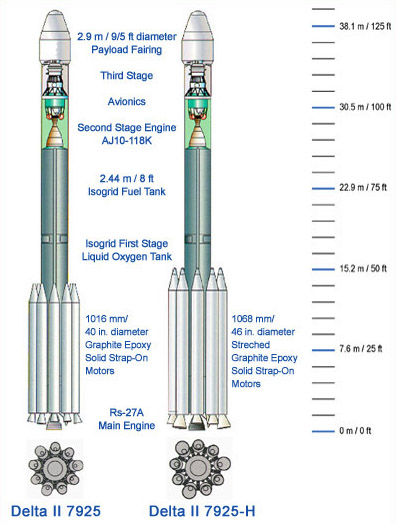 The principal differences between the two launch vehicles are the use of larger strap-on solid rocket motor for the Delta II 7925H and various structural modifications to support these larger solids.

Reasons for the Differences

Every 26 months, Earth, Mars and the Sun align for the most efficient, least energy-consuming path between Earth and Mars. (For advanced details, see at the JPL website Basics of Space Flight: Launch .)

The amount of energy it will take to launch each of the two Mars Exploration Rovers will be slightly different because the distances between Earth, Mars and the Sun change in between the two rover launch periods. (Rover A's launch period falls between May 30 and June 16, 2003. Rover B's launch period is roughly a month or so later, between June 25 and July 12, 2003.)

For a sequence of events and dates of launch periods and launch windows, please see the launch phase in the mission timeline.