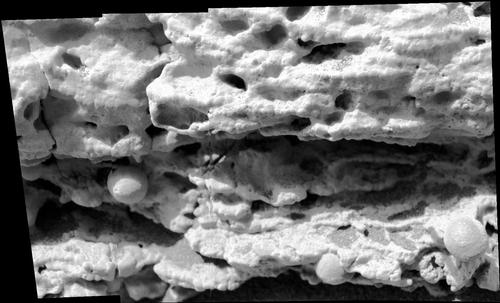 Clues to Wet History in Texture of a Martian Rock
By studying the rock record, Spirit and Opportunity have confirmed that water was long standing on the surface of Mars long ago. That finding is helping scientists to understand whether Mars ever could have been a habitat for life

New knowledge from the twin rovers uniquely contributes to meeting the four overarching goals of the Mars Exploration Program, while complementing data gathered through other Mars missions.

Determine whether life ever arose on Mars 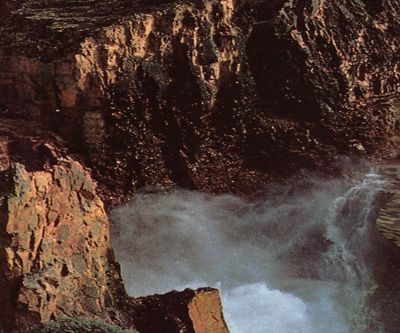 NASA's strategy for scientific investigations on Mars is to "seeks signs of life." Without water now or in the past, life as we know it could not exist as we know it could not exist.
Download full image ›
On Earth, life needs water to survive. It is likely, though not certain, that if life ever evolved on Mars, it did so in the presence of a long-standing supply of water. On Mars, we will therefore search for evidence of life in areas where liquid water was once stable, and below the surface where it still might exist today.

Life, as we understand it, requires water, so the history of water on Mars is critical to finding out if the martian environment was ever conducive to life. Although the Mars Exploration Rovers do not have the ability to detect life directly, they will be offering very important information on the habitability of the environment in the planet's history. The rovers will focus on questions concerning water on Mars: its past, where it was located, and the chemical and geological interactions with the rocks and soil. Close-up studies of surface samples will reveal new details of Mars mineralogy that may help answer whether water was involved in rock and soil formation, and the nature of those processes. This knowledge, in turn, will point the way to areas on Mars that may have been favorable for life in the past. Mission Results: What the rovers have discovered

Characterize the climate of Mars 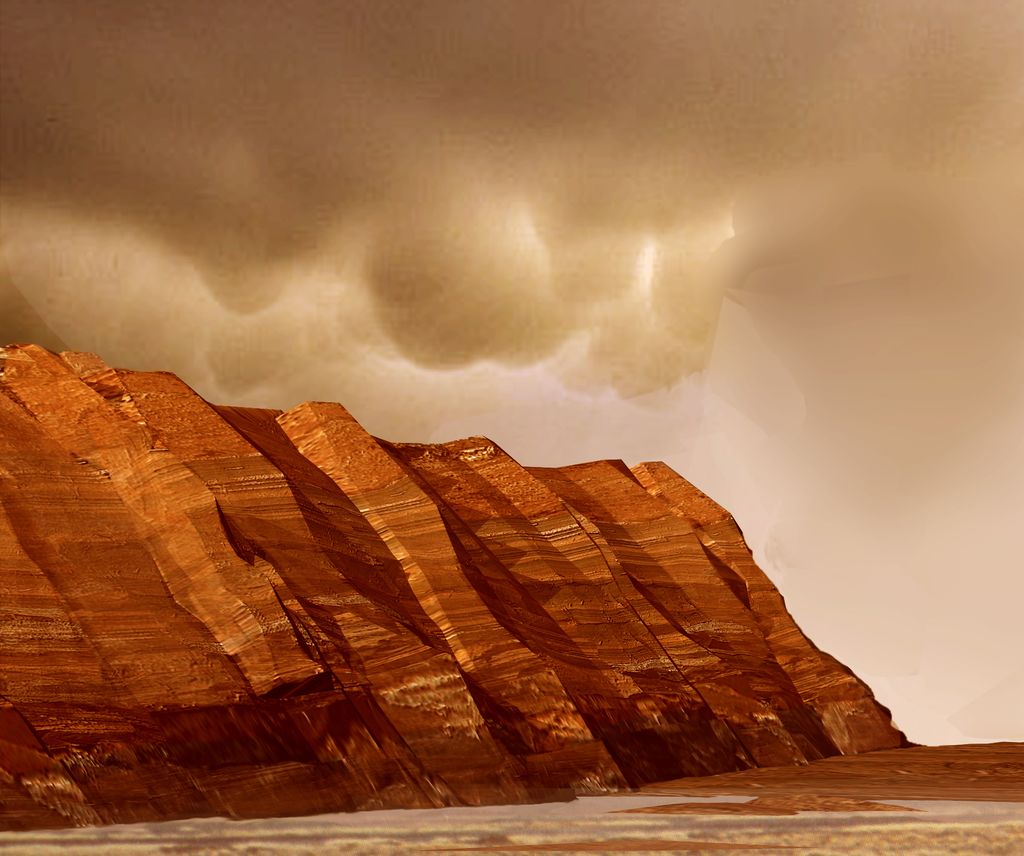 Scientists hope to determine if environmental conditions on Mars were ever capable of supporting microbial life. An example might be layers of rock indicating the presence of water, as portrayed in this artist's concept.
Download full image ›
A top priority in our exploration of Mars is understanding its present climate, what its climate was like in the distant past, and the causes of climate change over time.

Recorded in the structure and mineral content of Mars' rocks and soils are signs of the environmental conditions under which the materials were formed and altered. Detailed studies of rock samples with the rover instruments will reveal climate details of Mars´ past, which may have been warmer and wetter. In addition, one science instrument will periodically look up to gather temperature profiles of the atmospheric boundary layer - the layer of atmosphere from the surface up to 10 kilometers (6 miles) in altitude. This part of the atmosphere cannot be well observed by orbital instruments, and the data returned will provide important basic information for understanding the current climate on Mars. Mission Results: What the rovers have discovered

Characterize the geology of Mars 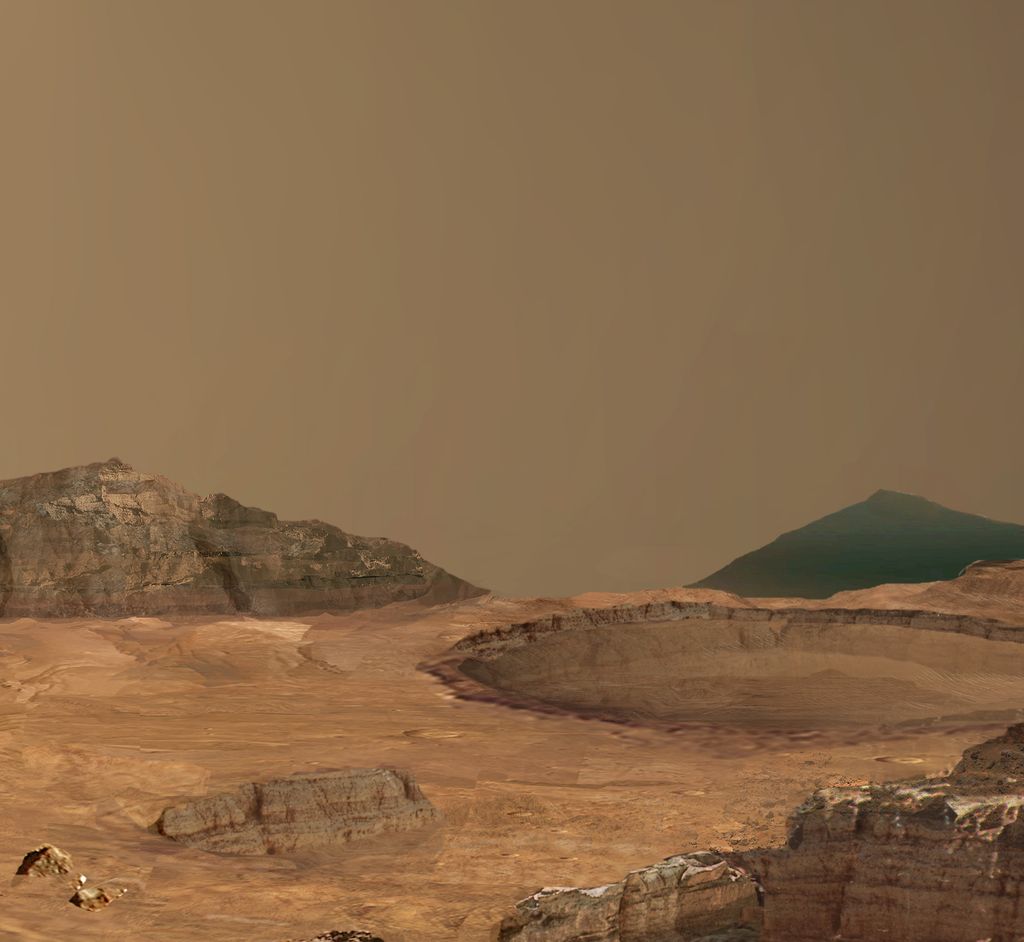 Layers of rock in craters and mountains, as shown in this artist's concept, contain a record of the geologic past on Mars.
Download full image ›
As part of the Mars Exploration Program, we want to understand how the relative roles of wind, water, volcanism, tectonics, cratering, and other processes have acted to form and modify the Martian surface.

The rovers are equipped with some of the tools a geologist would carry into the field, as well as the scientific instruments a geologist would use in a lab to study collected samples. Detailed mineralogical study of rock samples will reveal their content and the conditions in which they formed. A tool to scrape away weathered surfaces of rocks will expose fresh surfaces for close-up study.

Of particular interest to the rover science team are minerals containing the element iron, which interacts strongly with liquid water. Did the reddish Martian soil form billions of years ago when the planet may have been wetter and warmer, or is the rusty soil simply the result of ongoing interaction of an oxidizing atmosphere with the surface rocks? Other searches for geological evidence of water will be for clays, carbonates, salts and other minerals that formed in the presence of water. 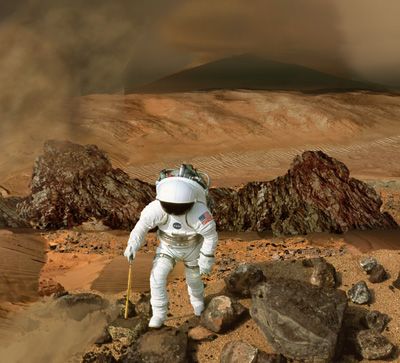 Mars Science Laboratory will help pave the way for potential human exploration of Mars, as depicted in this artist's concept.
Download full image ›
Eventually, humans will most likely journey to Mars. Getting astronauts to the Martian surface and returning them safely to Earth, however, is an extremely difficult engineering challenge. A thorough understanding of the Martian environment is critical to the safe operation of equipment and to human health.

The Mars Exploration Rovers will characterize the chemistry and mineralogy of the Martian soil and dust, and perhaps some of the potential hazards that they may pose to humans. Through its studies of surface mineralogy, the mission will help in the assessment of soil and rock as potential in-situ resources for future human missions. The rovers will also contribute to studies of how well the rovers can traverse given characteristics of the soil (for instance, how much resistance the soil provides, how far down the wheels sink etc.). This knowledge will help in planning for other future vehicles that might be needed on Mars. Mission Results: What the rovers have discovered