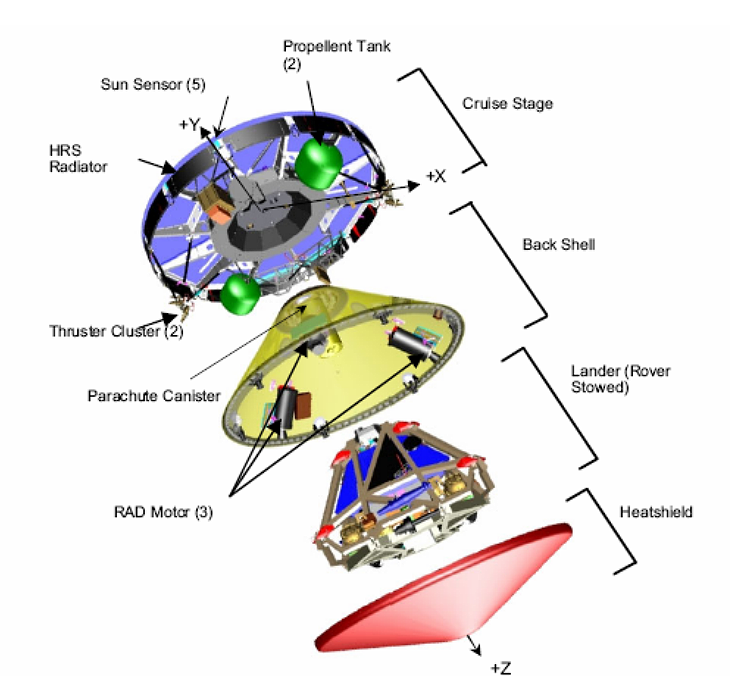 What is the size and weight of the cruise stage? 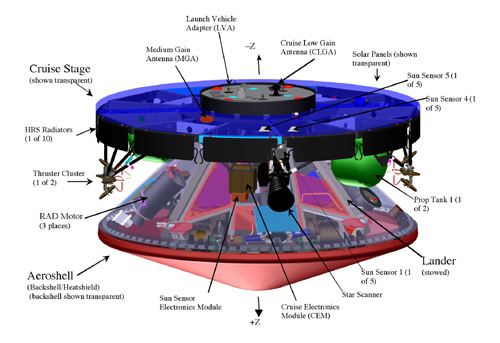 Spacecraft: cruise configuration
Download full image ›
The cruise stage is the configuration of the spacecraft for travel between Earth & Mars. The cruise stage is very similar to the Mars Pathfinder design and is approximately 2.65 meters (8.7 feet) in diameter and 1.6 meters (5.2 feet) tall when attached to aeroshell. It has a launch mass of 1063 kilograms (about 2,344 pounds).

The primary structure is aluminum with an outer ring of ribs covered by the solar panels, which are about 2.65m (8.7 feet) in diameter. Divided into five sections, the solar arrays can provide up to 600 Watts of power near Earth and 300 Watts at Mars.

Heaters and multi-layer insulation keep the spacecraft electronics "warm." In contrast, there is also a freon system used to remove heat from the flight computer and telecommunications hardware inside the rover so they don't get overheated. Cruise avionics systems allow the flight computer in the rover to interface with other electronics such as the sun sensors, the star scanner, and the heaters.

More details on what will happen during the Cruise Phase of the mission from the Mission Timeline.

What parts of the cruise stage that keep the spacecraft on course?

Star scanner and sun sensor:   The star scanner (with a backup system) and sun sensor allow the spacecraft to know where it is in space by analyzing the position of the sun and other stars in relation to itself. Sometimes the spacecraft can be slightly off course, a situation that is expected given the 320 million mile journey the spacecraft makes. Navigators thus plan up to six trajectory correction maneuvers, along with health checks.

Propellant tanks:   To ensure the spacecraft arrives at Mars in the right place for its planned landing, two light-weight, aluminum-lined tanks carry a maximum capacity of about 31 kilograms (about 68 pounds) of hydrazine propellant. Along with cruise guidance and control systems, these tanks of propellant allow navigators to keep the spacecraft closely on course during cruise. Through burns and pulse firings, the propellant enables three different types of trajectory correction maneuvers:

What parts of the cruise stage communicate with Earth?

Spacecraft use radio signals to communicate with Earth, similar to the way in which people hear music and news through FM and AM radio stations. X-band is a high-frequency radio wavelength that allows spacecraft communications with less power and smaller antennas than many older spacecraft, which used S-band. Navigators send the commands through two X-band antennas on the cruise stage:

More Details on Communications During Cruise