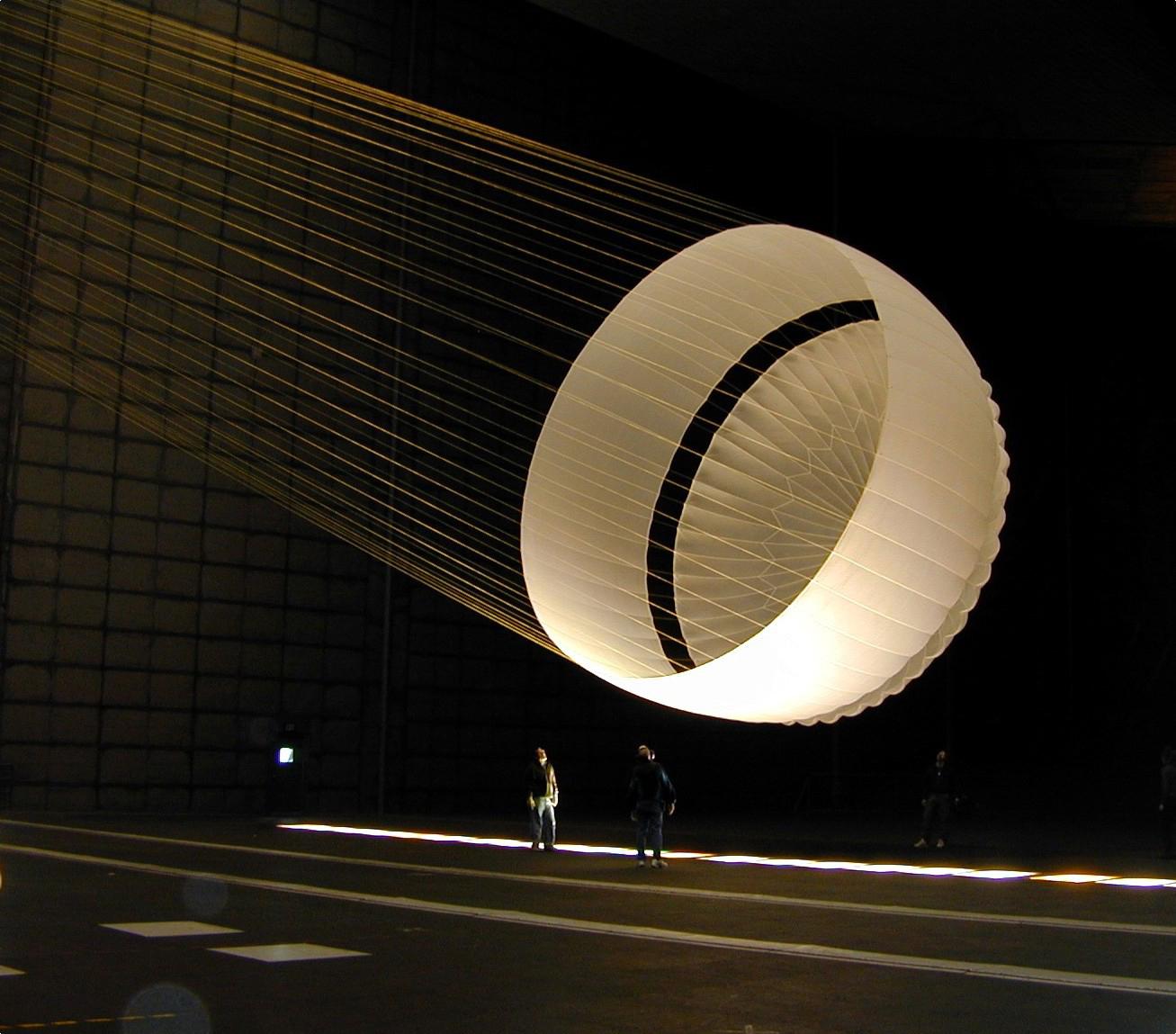 What is the parachute? 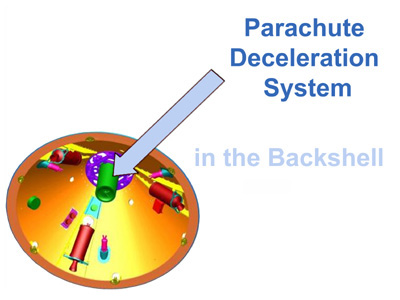 It is located in the backshell (green canister in the model to the left).


What is the parachute's design? 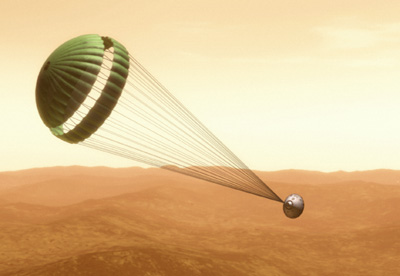 Illustration of open parachure and load during landing
Download full image ›
The design of the parachute is driven by "loads" (the forces the parachute experiences as it fully inflates). Loads are calculated by using atmospheric density, velocity, parachute drag area, and mass. The 2003 parachute design is part of a long-term Mars parachute technology development effort and is based on the designs and experience of the Viking and Pathfinder missions. The parachute for this mission is 40% larger than Pathfinder's because the largest load for the Mars Exploration Rover is between 18,000 and 19,000 pounds (80,100 - 84,600 N*) when the parachute fully inflates. By comparison, Pathfinder's inflation loads were approximately 8,000 pounds (35,600 N*).

(*N stands for "Newton," the unit of force required to accelerate a mass of one kilogram one meter per second.)

What is the parachute made of? 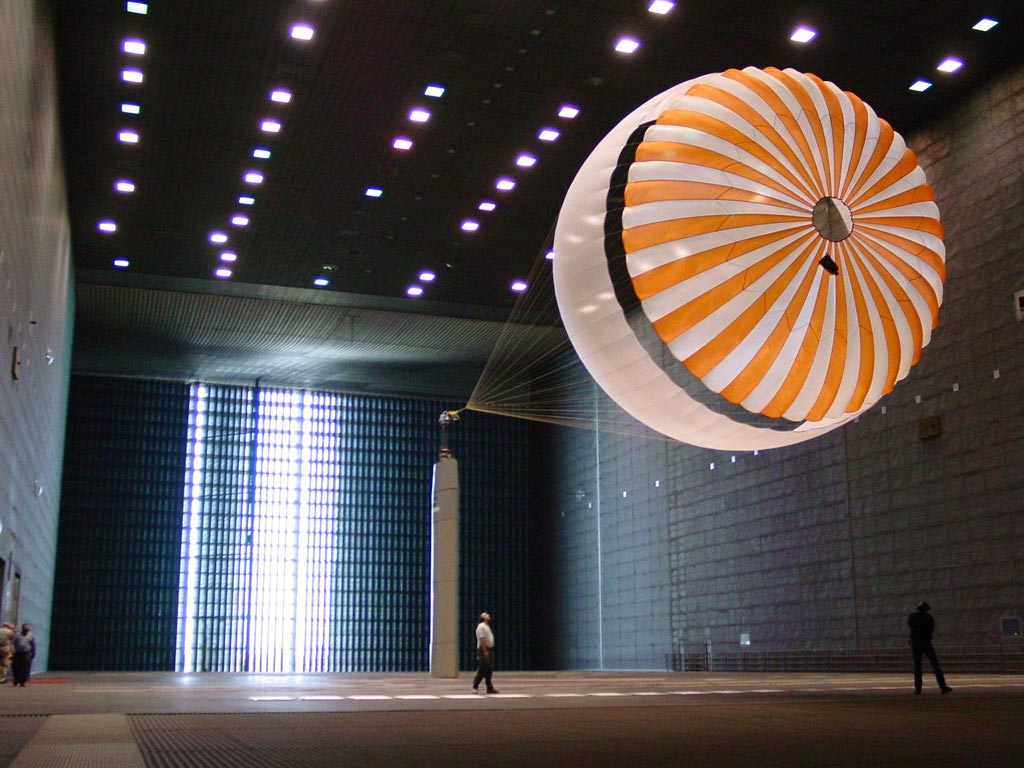 Parachute Test
Mars Exploration Rover parachute deployment testing in the world's largest wind tunnel at NASA's Ames Research Center, Moffet Field, Calif.
Download full image ›
The parachute is made out of two durable, lightweight fabrics: polyester and nylon. The parachute has a triple bridle (the tethers that connect the parachute to the backshell). This bridle is made out of Kevlar, the same material used in bullet-proof vests.

What parts work in tandem with the parachute?

Zylon Bridles: After the parachute is deployed at an altitude of about 10 km (6 miles) above the surface, the heatshield is released using 6 separation nuts and push-off springs. The lander then separates from the backshell and "rappels" down a metal tape on a centrifugal braking system built into one of the lander petals. The slow descent down the metal tape places the lander in position at the end of another bridle (tether), which is made of a nearly 20-meter-long (65-foot-long) braided Zylon.

Zylon is an advanced fiber material similar to Kevlar that is sewn specifically in a webbing pattern (like shoelace material) to make it stronger. (Zylon is often used in lines for sailing here on Earth.) The Zylon bridle provides space for airbag deployment, distance from the solid rocket motor exhaust stream, and increased stability. The bridle incorporates an electrical harness that allows the firing of the solid rockets from the backshell as well as provides data from the backshell inertial measurement unit (which measures rate and tilt of the spacecraft) to the flight computer in the rover.

Rocket assisted descent (RAD) motors: Because the atmospheric density of Mars is less than 1% of Earth's, the parachute alone cannot slow down the Mars Exploration Rover enough to ensure a safe, low landing speed. The spacecraft descent is assisted by rockets that bring the spacecraft to a dead stop 10-15 meters (30-50 feet) above the Martian surface.

Radar altimeter unit: A radar altimeter unit is used to determine the distance to the Martian surface. The radar's antenna is mounted at one of the lower corners of the lander tetrahedron. When the radar measurement shows the lander is a few meters (feet) above the surface, the Zylon bridle is cut, releasing the lander from the parachute and backshell so that it is free and clear for landing. The radar data also enables the timing sequence on airbag inflation and backshell RAD rocket firing.

More on the use of the parachute from the Mission Timeline: Entry, Descent, and Landing