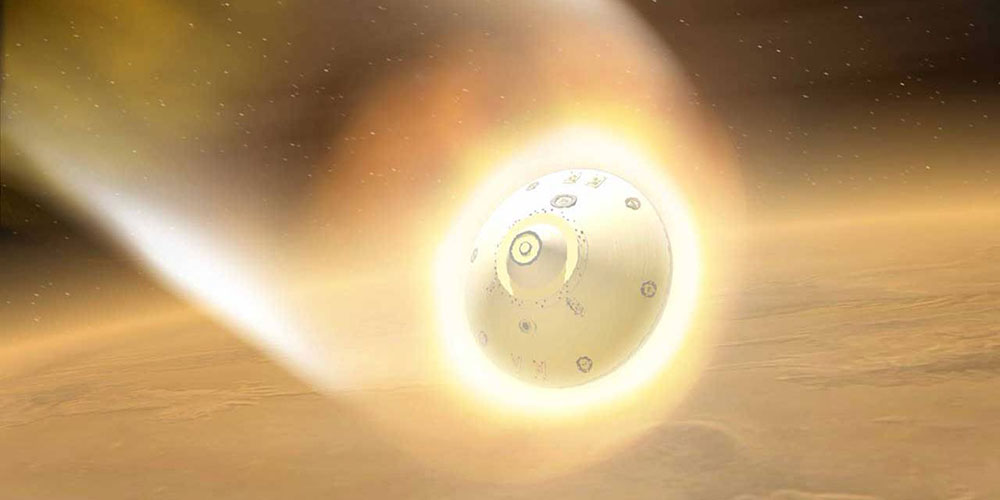 The entry, descent, and landing (EDL) phase begins when the spacecraft reaches the Mars atmospheric entry interface point (3522.2 kilometers or about 2,113 miles from the center of Mars) and ends with the lander on the surface of Mars in a safe state.

The rovers arrive during the latter half of the northern winter/southern summer on Mars. Rover A will land at approximately 2:00 p.m. local time on Mars (with Earth set an hour after landing), whereas Rover B will land at around 1:15 p.m. local time on Mars (with Earth set as long as two-and-a-half hours after landing). That means that both rovers will land in the martian afternoon while the Earth is still in view, allowing the Earth to receive the landing signal if the lander is on the base petal.

The entry, descent, and landing sequence for the Mars Exploration Rover mission is an adaptation of the Mars Pathfinder method:

Communications during entry, descent, and landing occur through a pair of low-gain antennas, one mounted on the backshell and the other on the rover itself. About 36 ten-second radio tones are transmitted to Earth during descent through the atmosphere, which takes approximately six minutes. These tones are coded to indicate the accomplishment of critical steps in the entry, descent, and landing timeline. [More on these tones in the communications section]

Learn more about the Steps in the entry, descent, and landing phase.