The Optical Navigation Camera was tested for improved navigation capability for future missions. Similar cameras on orbiters of the future will be able to serve as high-precision interplanetary "eyes" to guide incoming spacecraft as they near Mars.

From 30 days to 2 days prior to Mars Orbit Insertion, the spacecraft collected a series of images of Mars' moons Phobos and Deimos. By comparing the observed position of the moons to their predicted positions relative to the background stars, the mission team was able to accurately determine the position of the orbiter in relation to Mars. 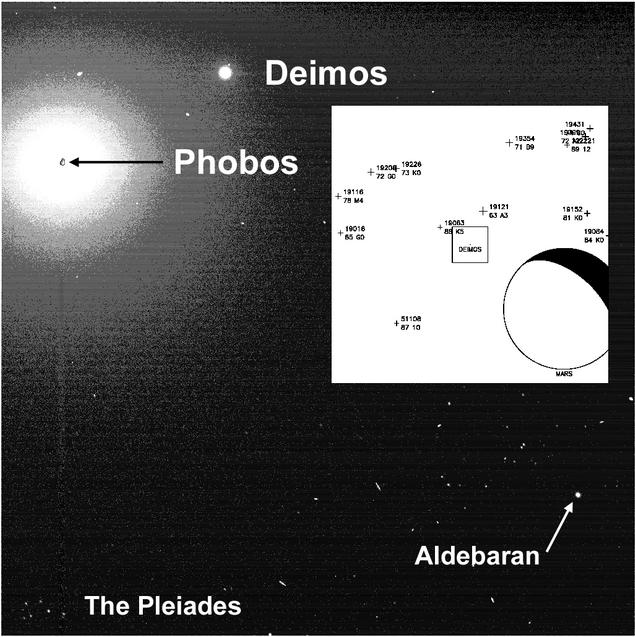 The insert in this image is a simulation of what the Mars Reconnaissance Orbiter's optical navigation camera images of the Martian moons Phobos and Deimos will look like. The images will not be up-close portraits of the moon like we have from the Viking missions. They will be contextual pictures that will aid navigators in getting the most specific location data, so they know exactly where the Mars Reconnaissance Orbiter spacecraft is before its orbit insertion.
Download full image › 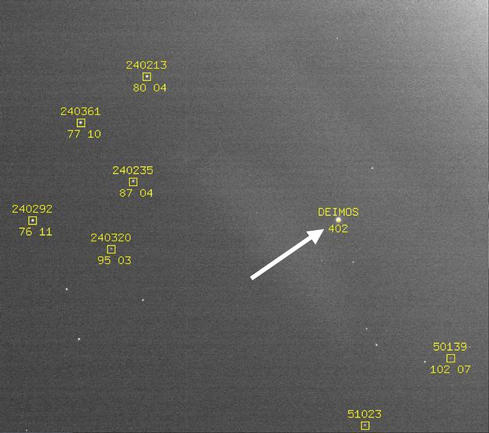 While not needed by Mars Reconnaissance Orbiter to navigate to Mars, the data from this experiment demonstrated that the technique could be used by future spacecraft to ensure their accurate arrival. Accuracy will be important to future landers and rovers in need of extremely precise navigation to safely reach their landing sites.