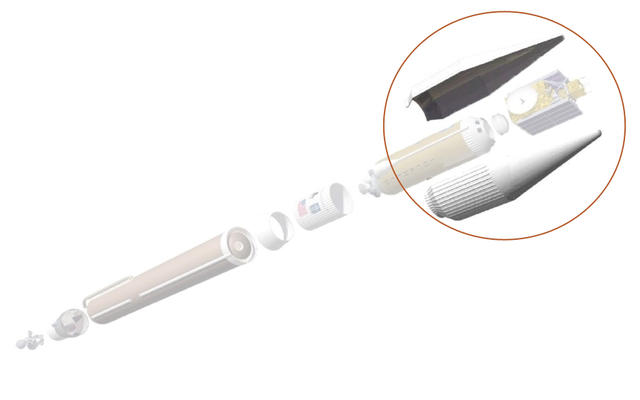 What is Payload Fairing?

Mars Reconnaissance Orbiter's payload fairing is the protective covering for the spacecraft during ascent.

Mars Reconnaissance Orbiter used a payload fairing (nose cone) that was 4 meters (13 feet) in diameter and weighed about the same as the spacecraft. The fairing protected the spacecraft from the weather on the ground as well as from the atmosphere during flight. While the launch vehicle was on the launch pad, air conditioning was supplied to the spacecraft to control temperature and protect it from dust and dirt. Shortly after Centaur ignition, the fairing was no longer needed and was separated into its two halves by explosive bolts and jettisoned. Automatic timers in the Centaur controlled this operation. The two fairing halves swung away to either side of the spacecraft and fell back to Earth, landing in the ocean.