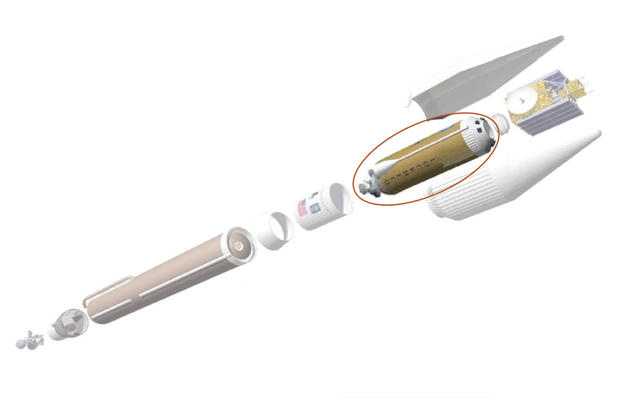 The Centaur upper stage was powered by liquid oxygen and liquid hydrogen, which provided the remaining energy necessary to send the spacecraft on its trajectory to Mars.

Keeping the spacecraft in the right position

The Centaur was a very sophisticated upper stage that could control its orientation very precisely. This ability was important both to control the direction of thrust during the burns, as well as to prevent sunlight from shining directly into spacecraft cameras and sensors which could have been damaged by high-intensity light.The Centaur always knew its position relative to the Sun and had computer programs on board that automatically controlled the orientation of the spacecraft relative to the Sun. Because the position of the Sun relative to the spacecraft was different for each day of the launch period, these computer programs had to be updated in case launch didn't occur on the first day of the launch period.

Stage II (unlike the Atlas Stage I) was re-startable, and fired twice.

The Centaur engine fired for the first time shortly after separation from the Stage I booster. It boosted the spacecraft into a parking orbit above Earth, in which the spacecraft and Centaur coasted between burns, of about 100 nautical miles (185 kilometers or 115 miles) altitude. The parking orbit was needed to allow the Centaur to be in the right position relative to both Earth and Mars for each of its two burns.

The duration of the first burn was about nine-and-a-half minutes.

The Centaur (with the spacecraft still attached) coasted in the parking orbit until it reached a point over the Indian Ocean where the Centaur engine fired a second time to accelerate the spacecraft out of Earth orbit and on its way toward Mars. The coast period between the two Centaur burns lasted about 33 minutes. During this coast period, the Centaur pointed the orbiter toward the Sun and slowly rolled along its axis (like a rotisserie) to control the temperatures on all parts of the Centaur and the spacecraft.