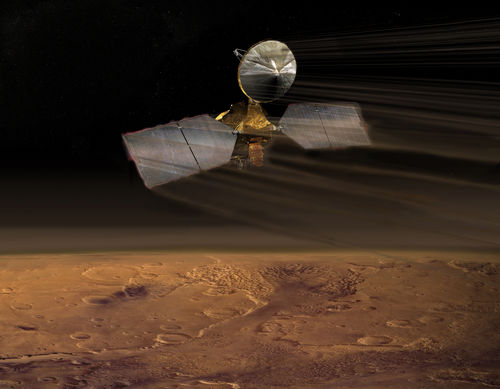 
NASA's Mars Reconnaissance Orbiter blasted off from Cape Canaveral in 2005, on a search for evidence that water persisted on the surface of Mars for a long periods of time. While other Mars missions have shown that water flowed across the surface in Mars' history, it remains a mystery whether water was ever around long enough to provide a habitat for life.

Studying the history of water on Mars

After a seven-month cruise to Mars and six months of aerobraking to reach its science orbit, Mars Reconnaissance Orbiter began seeking out the history of water on Mars with its science instruments. The instruments zoom in for extreme close-up photography of the martian surface, analyze minerals, look for subsurface water, trace how much dust and water are distributed in the atmosphere, and monitor daily global weather.These studies are identifying deposits of minerals that may have formed in water over long periods of time, looking for evidence of shorelines of ancient seas and lakes, and analyzing deposits placed in layers over time by flowing water. The mission is examining whether underground martian ice discovered by the Mars Odyssey orbiter is the top layer of a deep ice deposit or a shallow layer in equilibrium with the atmosphere and its seasonal cycle of water vapor.

In its survey of the red planet, the Mars Reconnaissance Orbiter is increasing tenfold the number of spots surveyed close-up. One of the orbiter's cameras is the largest ever flown on a planetary mission. Though previous cameras on other Mars orbiters could identify objects no smaller than a school bus, this camera can spot something as small as a dinner table. That capability has allowed the orbiter to identify obstacles such as large rocks that could jeopardize the safety of landers and rovers, including the Phoenix mission and Mars Science Laboratory mission. Its imaging spectrometer looks at small-scale areas about five times smaller than a football field, a scale perfect for identifying any hot springs or other small water features.

The orbiter's telecommunications systems provide a crucial service for future spacecraft, serving as the first link in a communications bridge back to Earth, an "interplanetary Internet" that can be used by numerous international spacecraft in coming years. Testing the use of a radio frequency called Ka-band, Mars Reconnaissance Orbiter has demonstrated the potential for greater performance in communications using significantly less power. The orbiter also carries an experimental navigation camera. Similar cameras on orbiters of the future will serve as high-precision interplanetary "eyes" to guide incoming landers to precise landings on Mars, opening up exciting but otherwise dangerous areas of the planet to exploration.he Mars Reconnaissance Orbiter mission met all its science goals in a two-year primary science phase. Two extensions, the latest beginning in 2010, have added to the bounty of science returns.For details on all mission stages, see the Mission Timeline.