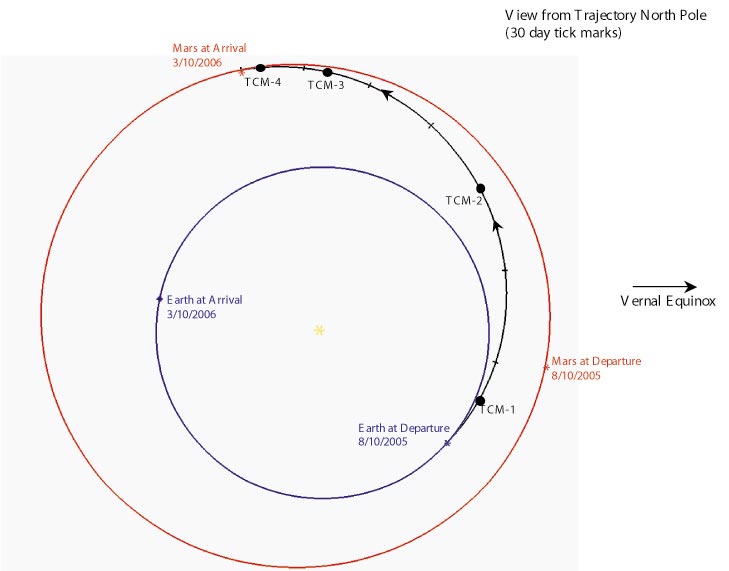 During seven months of travel through hundreds of millions of miles of space, the orbiter's path was adjusted slightly to make sure it arrived at the target location at Mars.

It was a remarkable achievement by the navigation team to nail down the target four months before the Mars Reconnaissance Orbiter arrived at the red planet! As a result, the orbiter used only two of five planned trajectory correction maneuvers to stay on course.

The two trajectory correction maneuvers occurred during the cruise phase:

TCM-1 was the largest correction and removed the launch vehicle injection errors and the injection aimpoint bias. During launch, navigators intentionally pointed the spacecraft away from Mars. This "bias" ensured that the upper stage of the launch vehicle would not hit Mars after separating from the orbiter, in accordance with NASA's planetary protection requirements. After separation, the navigation team removed the pointing error and put the orbiter back on course toward Mars.

TCM-2 was the smallest of the two course corrections and removed the TCM-1 execution errors and other accumulated errors in flight.

TCM-3 was planned but not needed.

For information about two more trajectory correction maneuvers that were available to the orbiter just in case it needed help during its final approach to Mars, please see the approach phase.