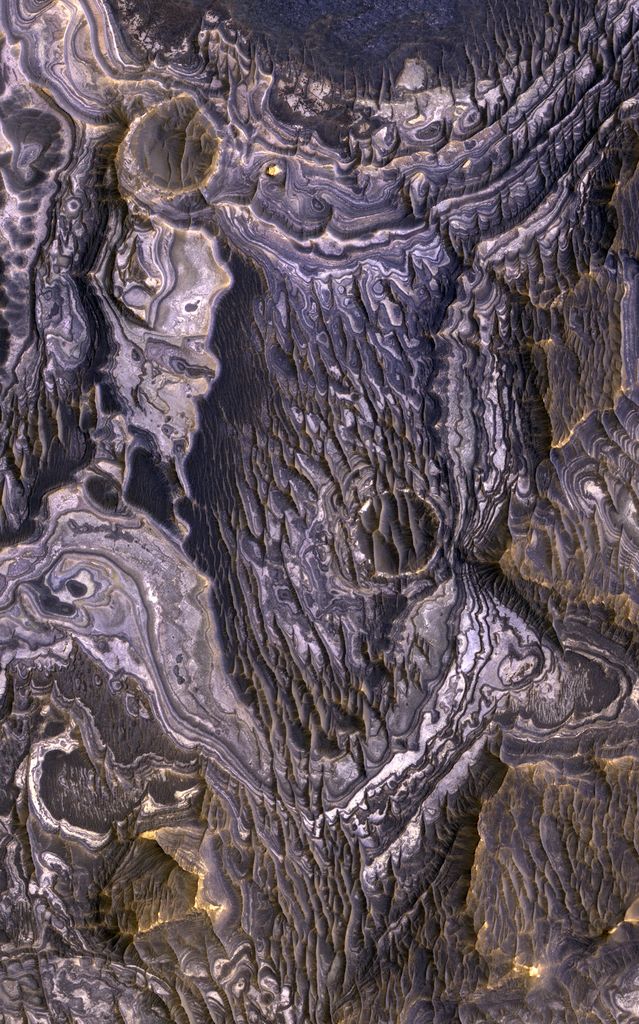 This view shows color variations in bright layered deposits on a plateau near Juventae Chasma in the Valles Marineris region of Mars. A brown mantle covers portions of the bright deposits. The view covers an area about 1.2 kilometers (three-fourths of a mile) across.

The image comes from an observation made by the High Resolution Imaging Science Experiment (HiRISE) camera on NASA's Mars Reconnaissance Orbiter on May 2, 2007.

Researchers have found that these bright layered deposits contain opaline silica and iron sulfates, consistent with low-temperature, acidic aqueous alteration of basaltic materials. They conclude that aqueous activity affected this plateau after formation of the nearby canyons. Although the source of water and sediment remains uncertain, the strong correlation between fluvial landforms and bright layered deposits in this region argues for sustained precipitation, surface runoff, and fluvial deposition occurring during Mars' Hesperian Era on the plateaus adjacent to Valles Marineris and along portions of canyon walls.

This image is one product from HiRISE observation PSP_003579_1755, centered at 4.7 degrees south latitude, 296.4 degrees east longitude. Other image products from this observation are available at [http://hirise.lpl.arizona.edu/PSP_003579_1755.

The University of Arizona, Tucson, operates the HiRISE camera, which was built by Ball Aerospace & Technologies Corp., Boulder, Colo. NASA's Jet Propulsion Laboratory, a division of the California Institute of Technology, Pasadena, manages the Mars Reconnaissance Orbiter for the NASA Science Mission Directorate, Washington. Lockheed Martin Space Systems, Denver, is the prime contractor for the project and built the spacecraft.
Image Credit: NASA/JPL-Caltech/University of Arizona
All Images