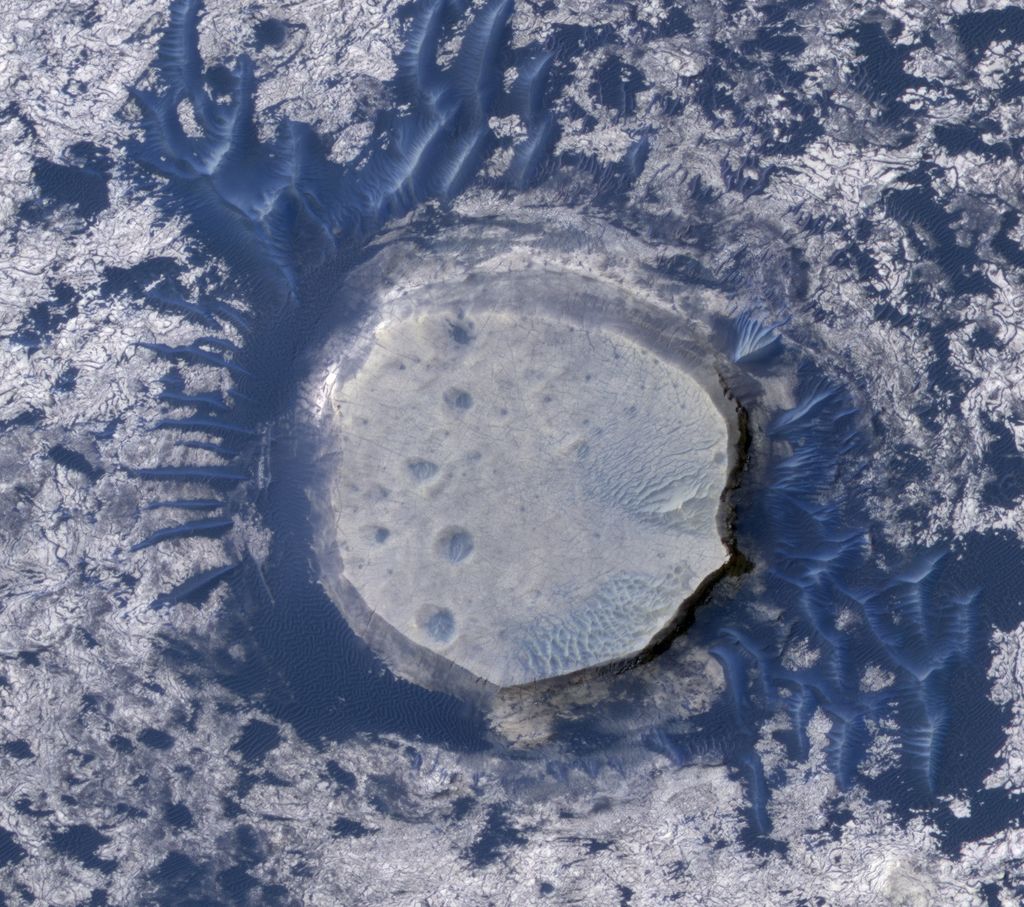 This view of an inverted crater in the Arabia Terra region of Mars is among the images taken by NASA's Mars Reconnaissance Orbiter in early 2010 as the spacecraft approached the 100-terabit milestone in total data returned.

The orbiter's High Resolution Imaging Science Experiment (HiRISE) camera recorded this image on Jan. 29, 2010, and the spacecraft surpassed 100 terabits about three weeks later. That is more than three times as much data as the combined total from all other NASA missions that have flown farther from Earth than the orbit of Earth's moon. The Mars Reconnaissance Orbiter reached Mars in 2006 and completed its primary science phase in 2008.

The inverted crater seen here spans about 250 meters (about 800 feet) in diameter. Sand in the dark dunes around the crater was probably derived from basalt, a black volcanic rock that is common on Mars. Most craters are depressions, but this one sticks up above the surrounding plains. Such "inverted topography" is found on Mars and Earth where erosion has stripped away surrounding topography. In this case, the crater was filled with sediment, and then subsequent erosion stripped away the terrain around the filled crater.

This image covers a swath of ground about 600 meters (about 2,000 feet) wide at about 3 degrees north latitude, 5 degrees east longitude. It is one product from HiRISE observation ESP_016459_1830, which was taken during Mars' northern-hemisphere spring. Other image products from this observation are available at http://hirise.lpl.arizona.edu/ESP_016459_1830.

The University of Arizona, Tucson, operates the HiRISE camera, which was built by Ball Aerospace & Technologies Corp., Boulder, Colo. NASA's Jet Propulsion Laboratory, a division of the California Institute of Technology, Pasadena, manages the Mars Reconnaissance Orbiter for the NASA Science Mission Directorate, Washington. Lockheed Martin Space Systems, Denver, is the spacecraft development and integration contractor for the project and built the spacecraft.
Image Credit: NASA/JPL-Caltech/University of Arizona