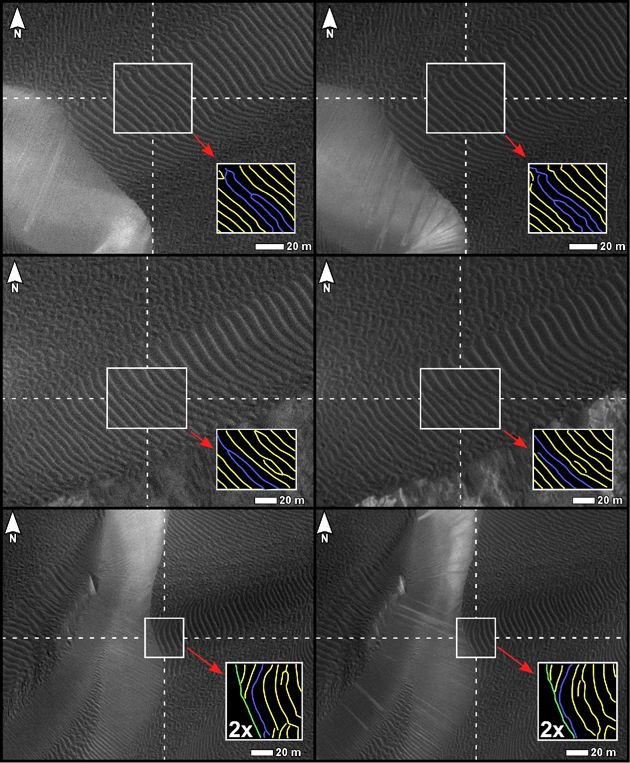 Changes in Ripples on Martian Dunes in Nili Patera

Three pairs of before and after images from the High Resolution Imaging Science Experiment (HiRISE) camera on NASA's Mars Reconnaissance Orbiter illustrate movement of ripples on dark sand dunes in the Nili Patera region of Mars.

The three images on the left are excerpts from a June 30, 2007, observation (late autumn at the site). The three on the right are of the same ground observed 15 weeks later, on Oct. 13, 2007 (winter at the site). Ripple crests discernable in the central portion of each image are diagrammed in the lower right portion of each image, with blue lines highlighting the largest changes. White scale bars in the bottom right of each of the six images are 20 meters (66 feet) long. North is toward the top.

A locator map at http://photojournal.jpl.nasa.gov/catalog/PIA12857 shows the context for the areas shown in these images. The inset box there labeled 3a-a' indicates the location of the top pair here. The boxes 3b-b' and 3c-c' indicate the locations of the middle and bottom pairs here, respectively. The site is field of dark sand dunes at 9 degrees north latitude, 67 degrees east longitude.

This comparison is part of a study of whether wind-shaped bedforms on Mars -- dunes and ripples -- are actively migrating in present-day atmospheric conditions. It is from a presentation by S. Silvestro, L.K. Fenton and D.A. Vaz at the 41st Lunar and Planetary Sciences Conference, March 2010, reporting that the bedforms at this Nili Patera site are actively migrating. The changes suggest that these dunes are not heavily cemented or crusted.

The University of Arizona, Tucson, operates the HiRISE camera, which was built by Ball Aerospace & Technologies Corp., Boulder, Colo. NASA's Jet Propulsion Laboratory, a division of the California Institute of Technology, Pasadena, manages the Mars Reconnaissance Orbiter for the NASA Science Mission Directorate, Washington. Lockheed Martin Space Systems, Denver, is the spacecraft development and integration contractor for the project and built the spacecraft.
Image Credit: NASA/JPL-Caltech/University of Arizona/International Research School of Planetary Sciences