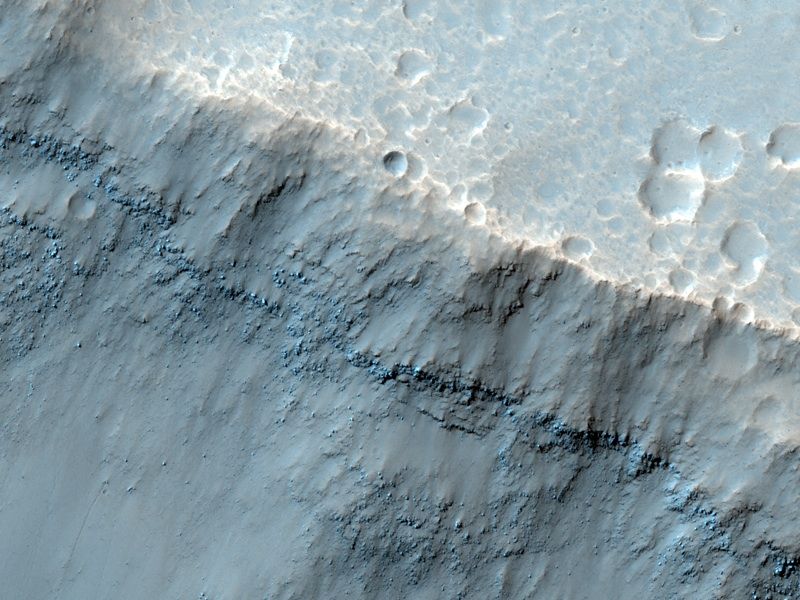 The target for this HiRISE observation was a suggestion submitted by James Secosky through the camera team's HiWish public-suggestion program. For more information about how to submit target suggestions, see http://uahirise.org/hiwish/.

Most of the rocks in this area appear to have formed originally as laterally continuous layers through volcanic or sedimentary processes. Loss of groundwater or ground ice could have then caused the ground to collapse, forming the current surface features of deep valleys and isolated hills with sloped faces. Subtle layering of these rocks can be observed along the slope face seen here, jutting out from under a mantle of surface sediments. Also present along many slopes are dark-toned, discontinuous lineations. These are tracks left behind by boulders that rolled down the slopes.

This image covers a swath of ground about 1 kilometer (about two-thirds of a mile) wide. It is a portion of HiRISE observation ESP_016869_1775, which is centered at 2.45 degrees south latitude, 332.15 degrees east longitude. The season on Mars is southern-hemisphere autumn. Other image products from this observation are available at http://hirise.lpl.arizona.edu/ESP_016869_1775.