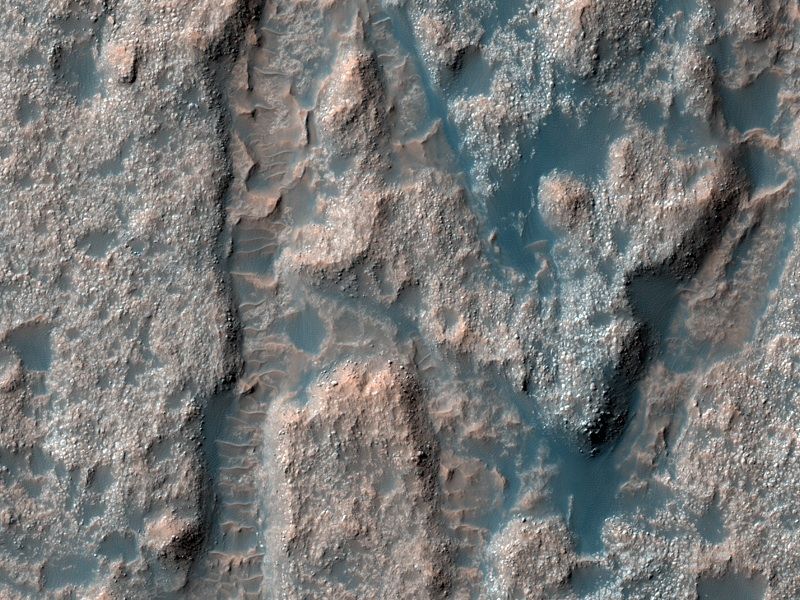 Deposits on the floor of Palos Crater

This image shows a portion of the floor in Palos Crater on equatorial Mars.

The High Resolution Imaging Science Experiment (HiRISE) camera on NASA's Mars Reconnaissance Orbiter recorded this image on March 8, 2010. The target for this HiRISE observation was a suggestion submitted through the camera team's HiWish public-suggestion program. For more information about how to submit target suggestions, see http://uahirise.org/hiwish/.

The floor appears bumpy with high-standing layered knobs. Most of the terrain on the floor is weathering into meter-size (yard-size) polygonal blocks. The circular structures in the image, many of which are filled with darker wind-blown material, are eroded impact craters.

Palos Crater is breached in the south by the 180-kilometer-long (112-mile-long) Tinto Vallis. Water transported along Tinto Vallis could have could have collected into Palos Crater to form a lake that later drained to the north. Sediments carried by Tinto Vallis would have also been deposited within Palos Crater, so the layered unit we see along the floor today could represent these fluvial sediments.

This image covers a swath of ground about 1 kilometer (about two-thirds of a mile) wide. It is a portion of HiRISE observation ESP_016943_1775, which is centered at 2.67 degrees south latitude, 111.13 degrees east longitude. The season on Mars is southern-hemisphere autumn. Other image products from this observation are available at http://hirise.lpl.arizona.edu/ESP_016943_1775.