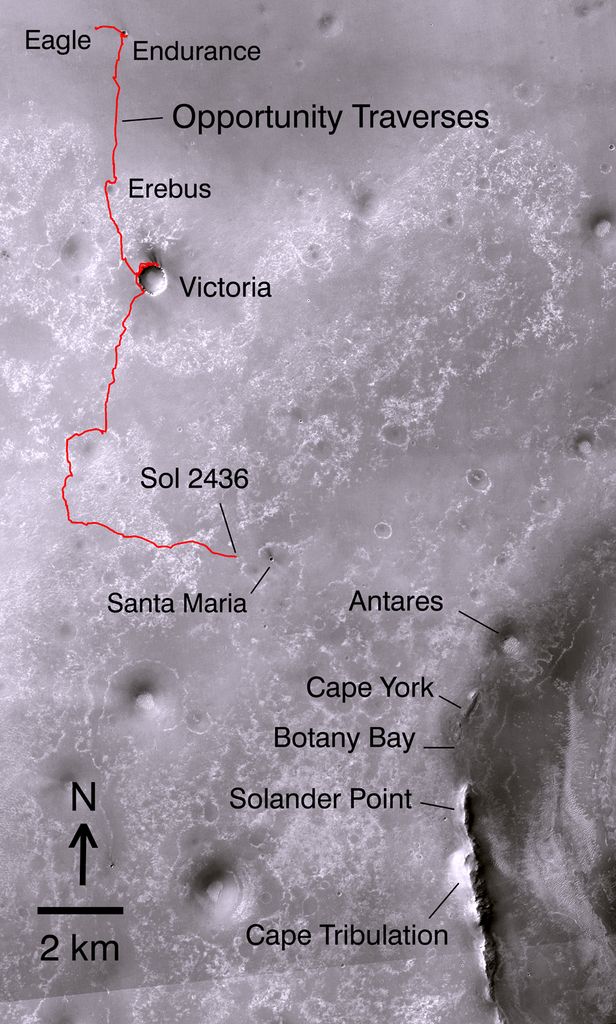 Opportunity's Path on Mars Through Sol 2436

The red line on this map shows where NASA's Mars Rover Opportunity has driven from the place where it landed in January 2004 -- inside Eagle Crater, at the upper left end of the track -- to where it reached on the 2,436th Martian day, or sol, of its work on Mars (Nov. 30, 2010). The map covers an area about 15 kilometers (9 miles) wide. North is at the top.

Drives subsequent to Sol 2436 in early December 2010 brought Opportunity closer to Santa Maria Crater, which is about 90 meters (295 feet) in diameter. The rover team plans to investigate Santa Maria for a few weeks before resuming Opportunity's long-term trek toward the rim of Endeavour Crater. The western edge of 22-kilometer-wide (14-mile-wide) Endeavour is in the lower right corner of this map. Some sections of the discontinuos raised rim and nearby features are indicated with informal names on the map: rim segments "Cape York" and "Solander Point"; a low area between them called "Botany Bay"; "Antares" crater, which formed on sedimentary rocks where the rim was eroded down; and rim fragment "Cape Tribulation," where orbital observations have detected clay minerals.

The base map is a mosaic of images from the Context Camera on NASA's Mars Reconnaissance Orbiter.
Image Credit: NASA/JPL-Caltech/MSSS/Ohio State Univ.