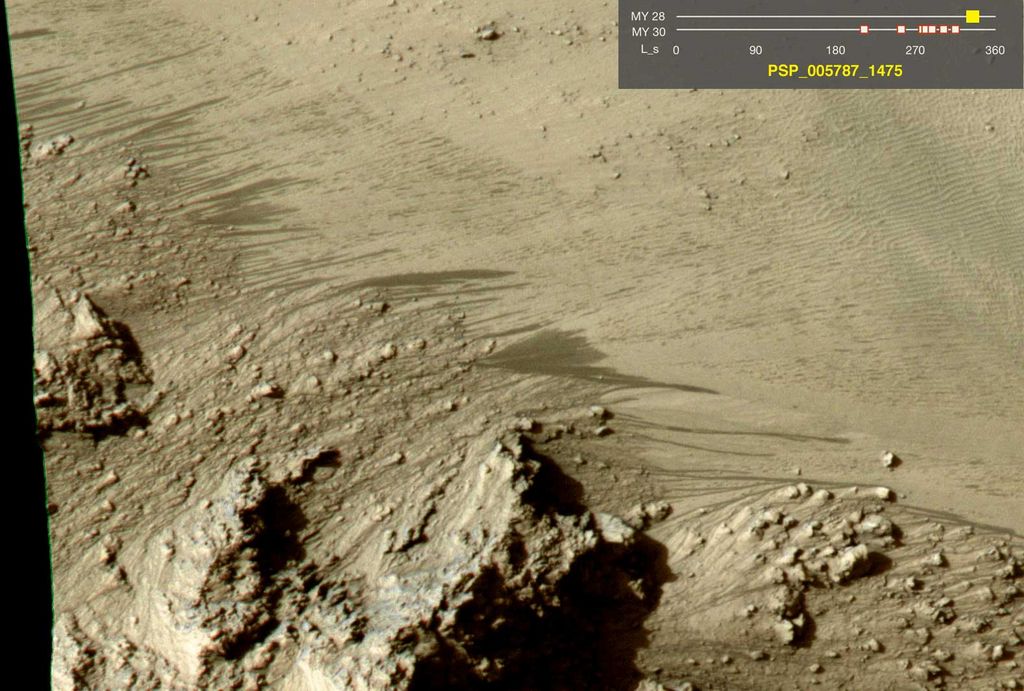 This series of images shows warm-season features that might be evidence of salty liquid water active on Mars today. Evidence for that possible interpretation is presented in a report by McEwen et al. in the Aug. 5, 2011, edition of Science.

These images come from observations of Horowitz crater, at 32 degrees south latitude, 141 degrees east longitude, by the High Resolution Imaging Science Experiment (HiRISE) camera on NASA's Mars Reconnaissance Orbiter. In time, the series spans from late summer of one Mars year to mid-summer of two years later. The images taken from oblique angles have been adjusted so that all steps in the sequence show the scene as if viewed from directly overhead.

The features that extend down the slope during warm seasons are called recurring slope lineae. They are narrow (one-half to five yards or meters wide), relatively dark markings on steep (25 to 40 degree) slopes at several southern hemisphere locations. Repeat imaging by HiRISE shows the features appear and incrementally grow during warm seasons and fade in cold seasons. They extend downslope from bedrock outcrops, often associated with small channels, and hundreds of them form in rare locations. They appear and lengthen in the southern spring and summer from 48 degrees to 32 degrees south latitudes favoring equator-facing slopes. These times and places have peak surface temperatures from about 10 degrees below zero Fahrenheit to 80 degree above zero Fahrenheit (about 250 to 300 Kelvin). Liquid brines near the surface might explain this activity, but the exact mechanism and source of the water are not understood.

The series is timed to dwell two seconds on the first and last frames and one second on intermediate frames, though network or computer performance may cause this to vary.

Other imagery related to these new findings from the Mars Reconnaissance Orbiter is at http://www.nasa.gov/mission_pages/MRO/multimedia/gallery/gallery-index.html .