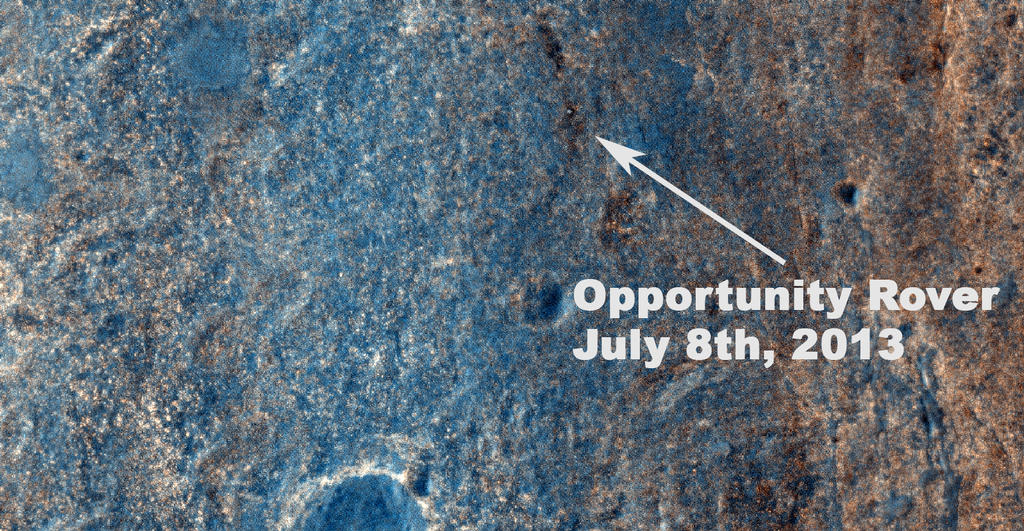 NASA's Mars Exploration Rover Opportunity has been on the western rim of Endeavour Crater in Meridiani Planum for about two years. Until May 2013, it was investigating sedimentary layers that are three to four billion years old on a portion of the rim called "Cape York." This image taken by the High Resolution Imaging Science Experiment (HiRISE) camera on NASA's Mars Reconnaissance Orbiter on July 8, 2013, captures Opportunity traversing south (at the end of the white arrow) to new science targets and a winter haven at "Solander Point," another portion of the Endeavour rim. The relatively level ground between Cape York and Solander Point is called "Botany Bay." The image was taken 10 years after Opportunity was launched from Florida on July 7, 2013, EDT and PDT (July 8, Universal Time).

Opportunity's destination at Solander Point is thought to have clay-bearing rocks (as detected from orbit) as part of well-exposed geological layers that could provide clues to Mars' watery past. In addition, north-facing slopes on Solander Point will increase the amount of solar energy the rover can collect during the upcoming Mars southern-hemisphere winter, allowing an active winter science campaign.

Opportunity investigated younger sedimentary units exposed in the smaller craters of Eagle, Endurance, and Victoria from early 2004 to mid-2009. By driving across Meridiani from Victoria to Endeavour Crater, and now from point-to-point on Endeavour's rim, Opportunity has set a new U.S. space program record for distance traversed on another planetary body, at greater than 22 miles or 36 kilometers.

Figure 1, an oblique, northward-looking view based on stereo orbital imaging, shows the location of Opportunity on its journey from Cape York to Solander Point when HiRISE took the new color image. Endeavour Crater is about 14 miles (22 kilometers) in diameter. The distance from Cape York to Solander Point is about 1.2 miles (2 kilometers). The red line indicates the path the rover has driven.

Figure 2 shows the location of the rover-containing section of new color image in relation to Solander Point. North is up. The scale bar is 250 meters (820 feet).

Figure 3 is an unannotated version of a section of the new color image including the rover.

This new image, HiRISE digital terrain modeling and cameras on Opportunity aid rover drivers in identifying safe routes. Additionally, they assist NASA geologists in finding attractive science targets for future investigation. The new image is one product from HiRISE observation ESP_032573_1775. Other products from the observation are at http://uahirise.org/ESP_032573_1775 .