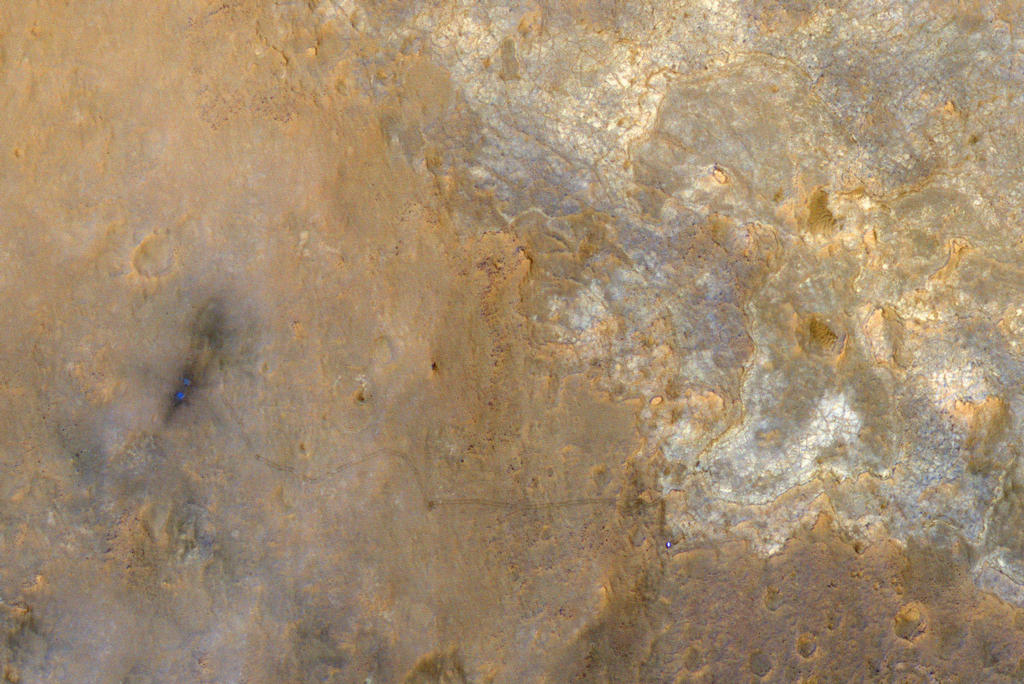 NASA's Mars Science Laboratory rover Curiosity appears as a bluish dot near the lower right corner of this enhanced-color view from the High Resolution Imaging Science Experiment (HiRISE) camera on NASA's Mars Reconnaissance Orbiter. The rover's tracks are visible extending from the landing site, "Bradbury Landing," in the left half of the scene. Two bright, relatively blue spots surrounded by darker patches are where the Mars Science Laboratory spacecraft's landing jets cleared away reddish surface dust at the landing site. North is toward the top. For scale, the two parallel lines of the wheel tracks are about 10 feet (3 meters) apart.

HiRISE shot this image on June 27, 2013, when Curiosity was at an outcrop called "Shaler" in the "Glenelg" area of Gale Crater. Subsequently the rover drove away from Glenelg toward the southwest.

When HiRISE captured this view, the Mars Reconnaissance Orbiter was rolled for an eastward-looking angle rather than straight downward. The afternoon sun illuminated the scene from the western sky, so the lighting was nearly behind the camera. Specifically, the angle from sun to orbiter to rover was just 5.47 degrees. This geometry hides shadows and reveals subtle color variations.