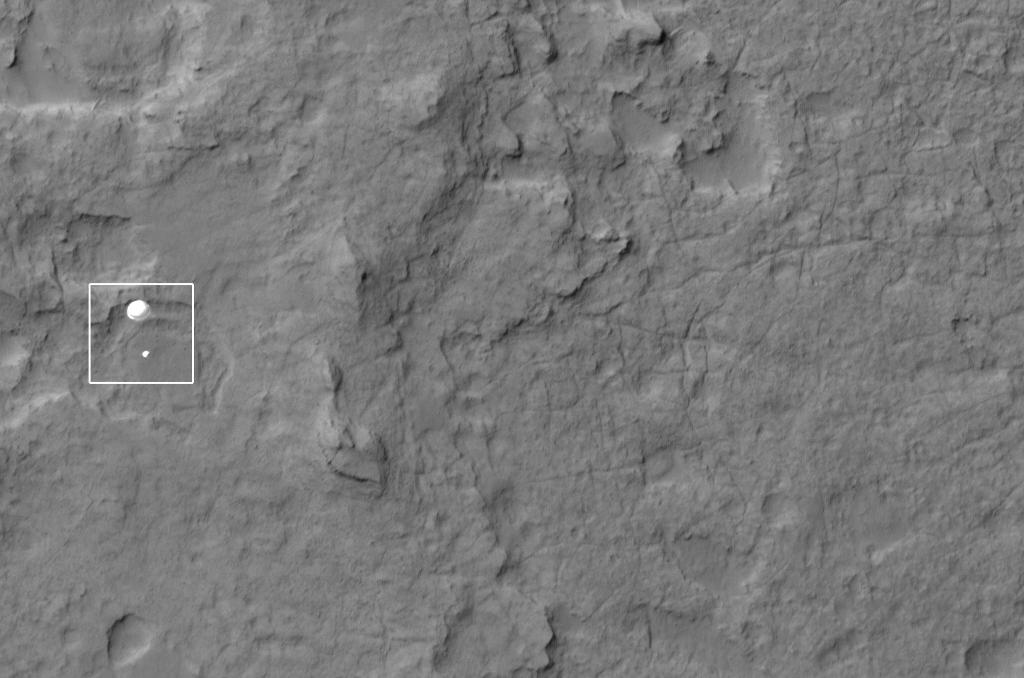 Curiosity Spotted on Parachute by Orbiter

NASA's Curiosity rover and its parachute were spotted by NASA's Mars Reconnaissance Orbiter as Curiosity descended to the surface on Aug. 5 PDT (Aug. 6 EDT). The High-Resolution Imaging Science Experiment (HiRISE) camera captured this image of Curiosity while the orbiter was listening to transmissions from the rover. Curiosity and its parachute are in the center of the white box; the inset image is a cutout of the rover stretched to avoid saturation. The rover is descending toward the etched plains just north of the sand dunes that fringe "Mt. Sharp." From the perspective of the orbiter, the parachute and Curiosity are flying at an angle relative to the surface, so the landing site does not appear directly below the rover.

The parachute appears fully inflated and performing perfectly. Details in the parachute, such as the band gap at the edges and the central hole, are clearly seen. The cords connecting the parachute to the back shell cannot be seen, although they were seen in the image of NASA's Phoenix lander descending, perhaps due to the difference in lighting angles. The bright spot on the back shell containing Curiosity might be a specular reflection off of a shiny area. Curiosity was released from the back shell sometime after this image was acquired.

This view is one product from an observation made by HiRISE targeted to the expected location of Curiosity about one minute prior to landing. It was captured in HiRISE CCD RED1, near the eastern edge of the swath width (there is a RED0 at the very edge). This means that the rover was a bit further east or downrange than predicted.