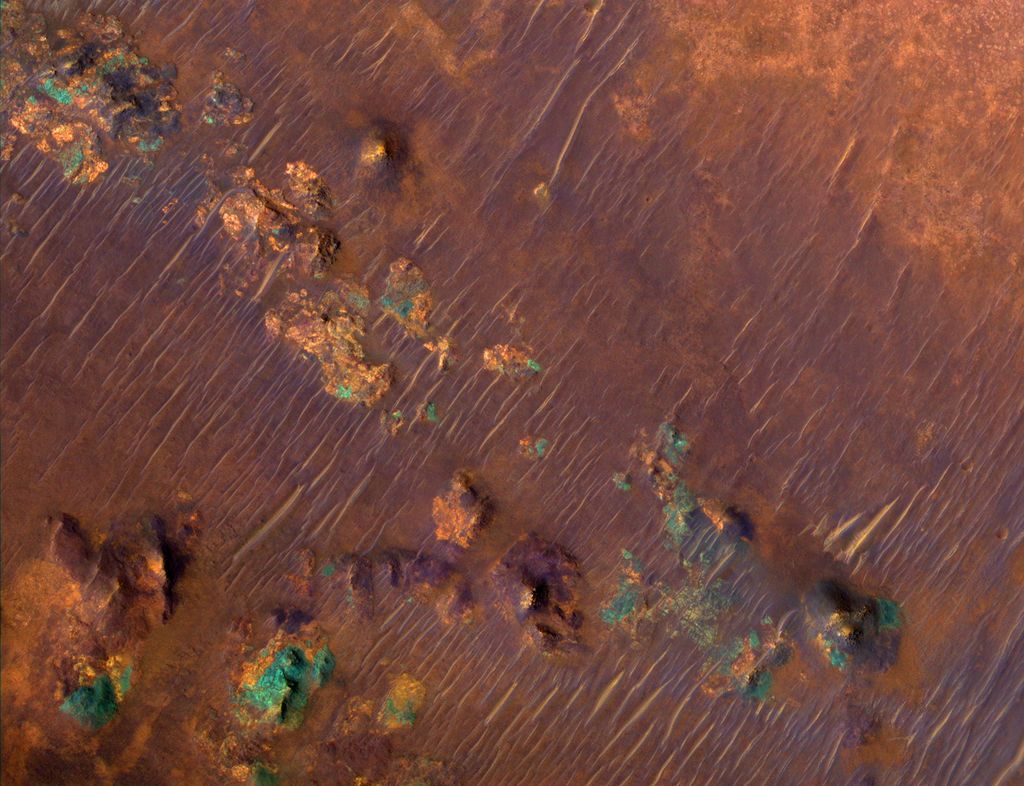 A portion of a trough in the Nili Fossae region of Mars is shown in enhanced color in this image from the High Resolution Imaging Science Experiment (HiRISE) camera on NASA's Mars Reconnaissance Orbiter. The image was taken on March 24, 2007, as part of a campaign to examine more than two dozen candidate landing sites for the NASA Mars Science Laboratory rover, which is scheduled for launch in 2009.

The Nili Fossae region has one of the largest exposures of clay minerals discovered by the mapping spectrometer (called OMEGA for its French name's acronym) on the European Space Agency's Mars Express orbiter. These minerals have also been mapped in greater detail by the Compact Reconnaissance Imaging Spectrometer for Mars (CRISM) on the Mars Reconnaissance Orbiter.

This image covers an area nearly one kilometer (six-tenths of a mile) wide, at 21.1 degrees north latitude, 74.2 degrees east longitude. North is up. It is a composite of exposures that HiRISE took in the infrared, red and blue portions of the spectrum. Color is enhanced beyond the standard enhancement in HiRISE color images, as this view is excerpted from a special video treatment of the full-frame image. The purple areas are basaltic in composition, including sand-sized material that bounces around in the wind to form dunes. Basalt in the most common type of volcanic rock on the Earth and other terrestrial planets. Orange areas are rich in clays. Clay minerals contain water in their mineral structure and may also preserve organic materials, so there is great interest in studying these deposits to understand past environments that could have supported life. The blue-green patches are outcops of unaltered rocks rich in the mineral pyroxene.

This is a portion of the full-frame color image catalogued as PSP_003086_2015 in the HiRISE collection. The image was taken at a local Mars time of 3:38 p.m. The scene is illuminated from the west with a solar incidence angle of 62 degrees, thus the sun was about 28 degrees above the horizon. The season on Mars was northern autumn.
Image Credit: NASA/JPL-Caltech/Univ. of Arizona