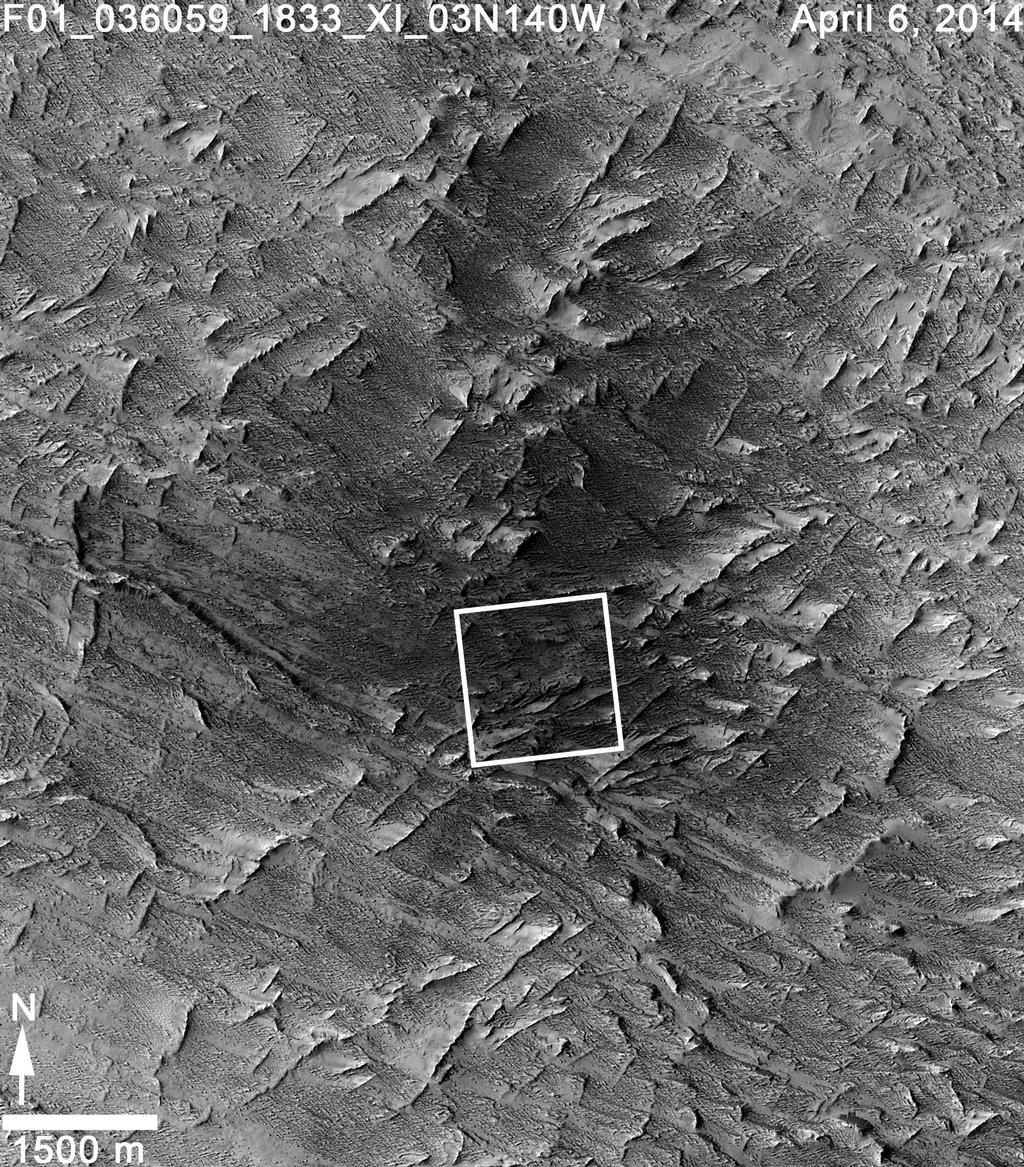 This April 6, 2014, image from the Context Camera (CTX) on NASA's Mars Reconnaissance Orbiter was taken as a follow-up to discovery of a possible March 2012 impact scar in images from the orbiter's Mars Color Imager (MARCI). It reveals two craters within the darkened area (at center of the inscribed rectangle).

CTX has imaged most of Mars at least once, with resolution that reveals features smaller than a tennis court. The camera had imaged this same area in January 2012, before the scar-causing event detected in MARCI images. Comparison of that CTX "before" image with this "after" one confirmed that the two craters were not yet present in early 2012 (see http://mars.nasa.gov/mro/multimedia/images/?ImageID=6261).

Many of the approximately 400 fresh impact craters on Mars that have been confirmed with before-and-after images were first seen as dark scars detected in CTX images and then confirmed to have craters within the scars when follow-up observations were made with the High Resolution Imaging Science Experiment (HiRISE) camera. This impact is the only one, so far, big enough for the scar to be first detected in MARCI images (see http://mars.nasa.gov/mro/multimedia/images/?ImageID=6256), with follow-up confirmation of a crater by CTX. The largest of several craters at this impact site is 159 feet (48.5 meters) wide, making it the biggest fresh impact crater ever clearly confirmed with before-and-after images, on Mars or anywhere else.

This image covers an area about 6 miles (10 kilometers) wide. The fresh craters are at 3.34 degrees north latitude, 219.38 degrees east longitude.

CTX is one of six instruments on NASA's Mars Reconnaissance Orbiter. The camera was built by and is operated by Malin Space Science Systems, San Diego. NASA's Jet Propulsion Laboratory, a division of the California Institute of Technology in Pasadena, manages the Mars Reconnaissance Orbiter Project for NASA's Science Mission Directorate, Washington.
Image Credit: NASA/JPL-Caltech/MSSS