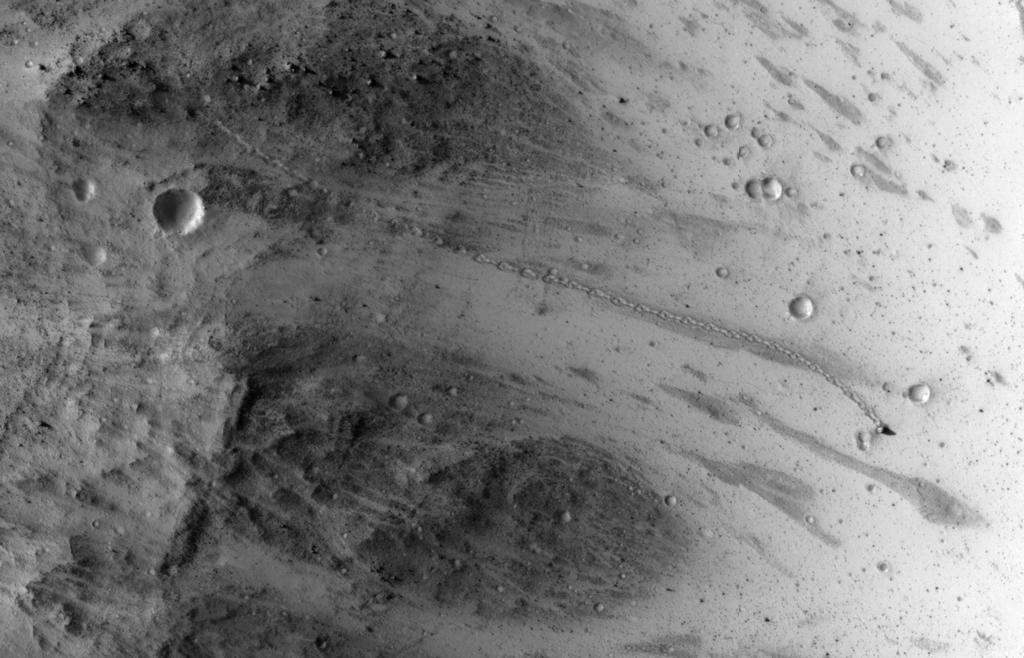 An Irregular, Upright Boulder on Mars

A path resembling a dotted line from the upper left to middle right of this image is the track left by an irregularly shaped, oblong boulder as it tumbled down a slope on Mars before coming to rest in an upright attitude at the downhill end of the track. The High Resolution Imaging Science Experiment (HiRISE) camera on NASA's Mars Reconnaissance Orbiter recorded this view on July 3, 2014.

The boulder's trail down the slope is about one-third of a mile (about 500 meters) long. The trail has an odd repeating pattern, suggesting the boulder could not roll straight due to its shape.

Calculated from the length of the shadow cast by the rock and the known angle of sunlight during this afternoon exposure, the height of the boulder is about 20 feet (6 meters). Its width as seen from overhead is only about 11.5 feet (3.5 meters), so it indeed has an irregular shape. It came to rest with its long axis pointed up.

The location is in a region of Mars with steep slopes at 3.31 degrees south latitude, 302 degrees east longitude. The image is an excerpt from HiRISE observation ESP_037190_1765. Other image products from this observation are available at http://hirise.lpl.arizona.edu/ESP_037190_1765 .