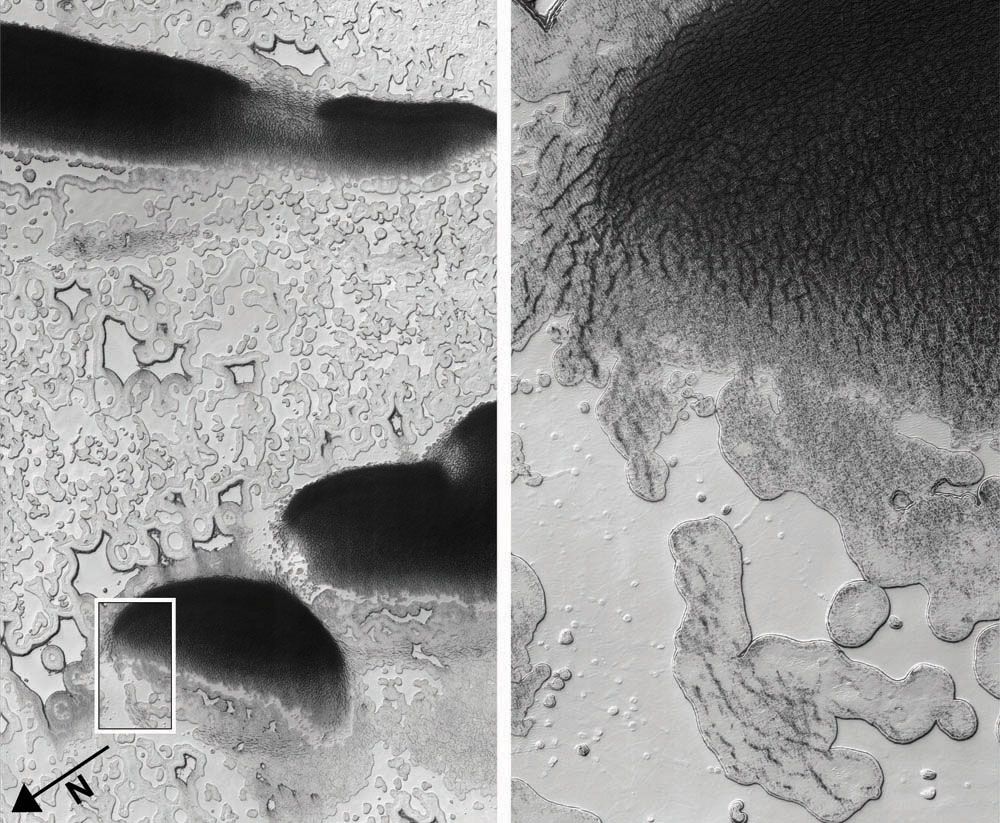 These images from orbit show an area near Mars' south pole where coalescing or elongated pits are interpreted as signs that an underlying deposit of frozen carbon dioxide, or "dry ice," has been shrinking by sublimation.

The image on the left covers an area about 5.2 kilometers (3.2 miles) across, near 87 degrees south latitude, 268 degrees east longitude. It was taken by the High Resolution Imaging Science Experiment (HiRISE) camera on NASA's Mars Reconnaissance Orbiter. North is toward the lower left. The area indicated by the inscribed rectangle near the directional arrow is enlarged as the image on the right.

Observations by the Shallow Subsurface Radar (SHARAD) instrument on the same orbiter indicate a thick deposit of dry ice beneath the surface in this area. Sublimation of that dry ice may have caused the pitting. In the magnified image at right, a thin water-ice layer on the surface exhibits heavy and concentric fracturing that may be a response to continued sublimation of the underlying, radar-detected layer. The smoother surface in much of the lower portion of the right-hand image is a thinner coat of dry ice that formed over the water ice after the fracturing and that is part of what is know as the "residual cap."

These images are portions of HiRISE observation ESP_014342_0930, taken Aug. 18, 2009. Other image products from this observation are available at http://hirise.lpl.arizona.edu/ESP_014342_0930. HiRISE is operated by the University of Arizona, Tucson, and the instrument was built by Ball Aerospace & Technologies Corp., Boulder, Colo.

SHARAD was provided by the Italian Space Agency. Its operations are led by Sapienza University of Rome, and its data are analyzed by a joint U.S.-Italian science team. NASA's Jet Propulsion Laboratory, a division of the California Institute of Technology in Pasadena, manages the Mars Reconnaissance Orbiter for the NASA Science Mission Directorate, Washington. Lockheed Martin Space Systems, Denver, built the spacecraft.
Image Credit: NASA/JPL-Caltech/Univ. of Arizona