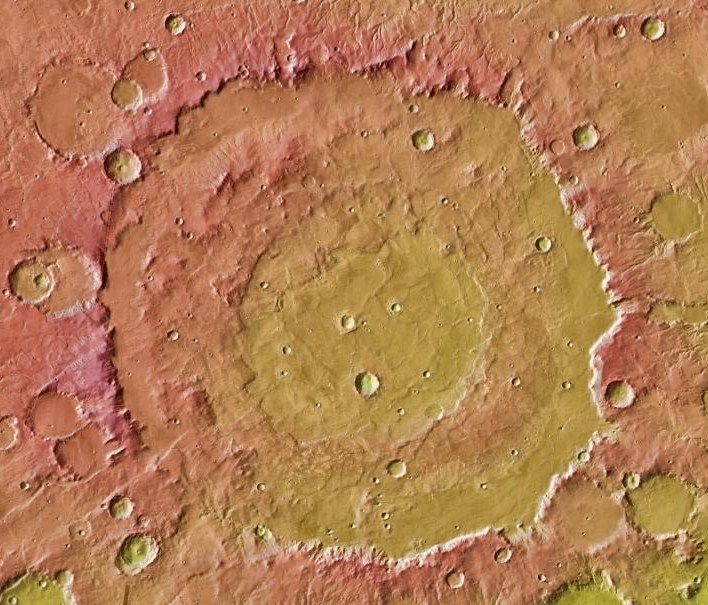 This image shows the context for orbital observations of exposed rocks that had been buried an estimated 5 kilometers (3 miles) deep on Mars. It covers an area about 560 kilometers (350 miles) across, dominated by the Huygens crater, which is about the size of Wisconsin.

The impact that excavated Huygens lifted material from far underground and piled some of it in the crater's rim. At about the 10 o'clock position around the rim of Huygens lies an unnamed crater about 35 kilometers (22 miles) in diameter that has punched into the uplifted rim material and exposed rocks containing carbonate minerals. The minerals were identified by observations with the Compact Reconnaissance Imaging Spectrometer for Mars on NASA's Mars Reconnaissance Orbiter.

North is toward the top of this image, which is centered at 14 degrees south latitude, 304.4 degrees west longitude.

The Thermal Emission Imaging System was developed by Arizona State University, Tempe, in collaboration with Raytheon Santa Barbara Remote Sensing and is operated by a team based at ASU. NASA's Jet Propulsion Laboratory, a division of the California Institute of Technology in Pasadena, manages the Mars Odyssey mission for the NASA Science Mission Directorate, Washington. Lockheed Martin Space Systems, Denver, is NASA's industry partner for the mission and built the spacecraft.
Image Credit: NASA/JPL-Caltech/Arizona State Univ.