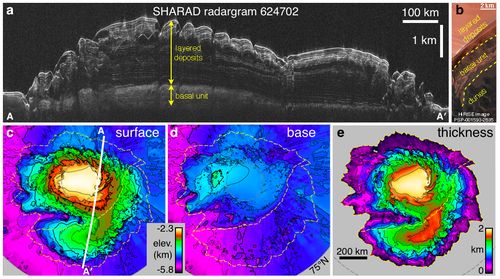 This composite graphic illustrates the use of the Shallow Radar instrument on NASA's Mars Reconnaissance Orbiter for mapping underground ice-rich layers of the north polar layered terrain on Mars.

Credit: NASA/JPL-Caltech/Univ. of Rome/SWRI/Univ. of Arizona

Alignment of the layering patterns with the modeled climate cycles provides insight about how the layers accumulated. These ice-rich, layered deposits cover an area one-third larger than Texas and form a stack up to 2 kilometers (1.2 miles) thick atop a basal deposit with additional ice.

"Contrast in electrical properties between layers is what provides the reflectivity we observe with the radar," said Nathaniel Putzig of Southwest Research Institute, Boulder, Colo., a member of the science team for the Shallow Radar instrument on the orbiter. "The pattern of reflectivity tells us about the pattern of material variations within the layers."

Earlier radar observations indicated that the Martian north-polar layered deposits are mostly ice. Radar contrasts between different layers in the deposits are interpreted as differences in the concentration of rock material, in the form of dust, mixed with the ice. These deposits on Mars hold about one-third as much water as Earth's Greenland ice sheet.

Putzig and nine co-authors report findings from 358 radar observations in a paper accepted for publication by the journal Icarus and currently available online.

Their radar results provide a cross-sectional view of the north-polar layered deposits of Mars, showing that high-reflectivity zones, with multiple contrasting layers, alternate with more-homogenous zones of lower reflectivity. Patterns of how these two types of zones alternate can be correlated to models of how changes in Mars' tilt on its axis have produced changes in the planet's climate in the past 4 million years or so, but only if some possibilities for how the layers form are ruled out.

"We're not doing the climate modeling here; we are comparing others' modeling results to what we observe with the radar, and using that comparison to constrain the possible explanations for how the layers form," Putzig said.

The most recent 300,000 years of Martian history are a period of less dramatic swings in the planet's tilt than during the preceding 600,000 years. Since the top zone of the north-polar layered deposits -- the most recently deposited portion -- is strongly radar-reflective, the researchers propose that such sections of high-contrast layering correspond to periods of relatively small swings in the planet's tilt.

They also propose a mechanism for how those contrasting layers would form. The observed pattern does not fit well with an earlier interpretation that the dustier layers in those zones are formed during high-tilt periods when sunshine on the polar region sublimates some of the top layer's ice and concentrates the dust left behind. Rather, it fits an alternative interpretation that the dustier layers are simply deposited during periods when the atmosphere is dustier.

The new radar mapping of the extent and depth of five stacked units in the north-polar layered deposits reveals that the geographical center of ice deposition probably shifted by 400 kilometers (250 miles) or more at least once during the past few million years.

"The radar has been giving us spectacular results," said Jeffrey Plaut of NASA's Jet Propulsion Laboratory, Pasadena, Calif., a co-author of the paper. "We have mapped continuous underground layers in three dimensions across a vast area."

The Italian Space Agency operates the Shallow Radar instrument, which it provided for NASA's Mars Reconnaissance Orbiter. The orbiter has been studying Mars with six advanced instruments since 2006. It has returned more data from the planet than all other past and current missions to Mars combined. For more information about the mission, visit: http://www.nasa.gov/mro

JPL, a division of the California Institute of Technology, Pasadena, manages the Mars Reconnaissance Orbiter for NASA's Science Mission Directorate, Washington. Lockheed Martin Space Systems, Denver, is the prime contractor for the project and built the spacecraft.