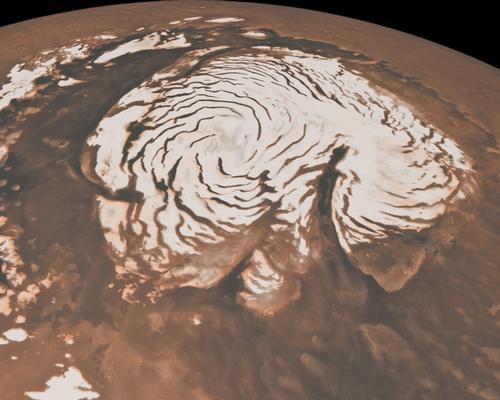 This image, combining data from two instruments aboard NASA's Mars Global Surveyor, depicts an orbital view of the north polar region of Mars.

The Shallow Radar, or SHARAD, instrument aboard the Mars Reconnaissance Orbiter revealed subsurface geology allowing scientists to reconstruct the formation of a large chasm and a series of spiral troughs on the northern ice cap of Mars. The findings appear in two papers in the May 27 issue of the journal Nature.

"SHARAD is giving us a beautifully detailed view of ice deposits, whether at the poles or buried in mid-latitudes, as they changed on Mars over the last few million years," said Rich Zurek, Mars Reconnaissance Orbiter project scientist at NASA's Jet Propulsion Laboratory in Pasadena, Calif.

On Earth, large ice sheets are shaped mainly by ice flow. According to this latest research, other forces have shaped, and continue to shape, polar ice caps on Mars. The northern ice cap is a stack of ice and dust layers up to two miles deep, covering an area slightly larger than Texas. Analyzing radar data on a computer, scientists can peel back the layers like an onion to reveal how the ice cap evolved over time.

One of the most distinctive features of the northern ice cap is Chasma Boreale, a canyon about as long as Earth's Grand Canyon but deeper and wider. Some scientists believe Chasma Boreale was created when volcanic heat melted the bottom of the ice sheet and triggered a catastrophic flood. Others suggest strong polar winds carved the canyon out of a dome of ice.

Other enigmatic features of the ice cap are troughs that spiral outward from the center like a gigantic pinwheel. Since the troughs were discovered in 1972, scientists have proposed several hypotheses about how they formed. Perhaps as Mars spins, ice closer to the poles moves slower than ice farther away, causing the semi-fluid ice to crack. Perhaps, as one mathematical model suggests, increased solar heating in certain areas and lateral heat conduction could cause the troughs to assemble.

Data from Mars now points to both the canyon and spiral troughs being created and shaped primarily by wind. Rather than being cut into existing ice very recently, the features formed over millions of years as the ice sheet grew. By influencing wind patterns, the shape of underlying, older ice controlled where and how the features grew.

"Nobody realized that there would be such complex structures in the layers," said Jack Holt, of the University of Texas at Austin's Institute for Geophysics. Holt is the lead author of the paper focusing on Chasma Boreale. "The layers record a history of ice accumulation, erosion and wind transport. From that, we can recover a history of climate that's much more detailed than anybody expected."

The Mars Reconnaissance Orbiter was launched on Aug. 12, 2005. SHARAD and the spacecraft's five other instruments began science operations in November 2006.

"These anomalous features have gone unexplained for 40 years because we have not been able to see what lies beneath the surface," said Roberto Seu, Shallow Radar team leader at the University of Rome. "It is gratifying to me that with this new instrument we can finally explain them."

The MRO mission is managed by JPL for the Mars Exploration Program at NASA's Headquarters in Washington. The Shallow Radar instrument was provided by the Italian Space Agency, and its operations are led by the InfoCom Department, University of Rome. JPL is managed for NASA by the California Institute of Technology in Pasadena, Calif.