Thickness Map of Buried Carbon-Dioxide Deposit
A newly found, buried deposit of frozen carbon dioxide -- dry ice -- near the south pole of Mars contains about 30 times more carbon dioxide than previously estimated to be frozen near the pole.
Download full image ›
PASADENA, Calif. -- NASA's Mars Reconnaissance Orbiter has discovered the total amount of atmosphere on Mars changes dramatically as the tilt of the planet's axis varies. This process can affect the stability of liquid water, if it exists on the Martian surface, and increase the frequency and severity of Martian dust storms.

Researchers using the orbiter's ground-penetrating radar identified a large, buried deposit of frozen carbon dioxide, or dry ice, at the Red Planet's south pole. The scientists suspect that much of this carbon dioxide enters the planet's atmosphere and swells the atmosphere's mass when Mars' tilt increases. The findings are published in this week’s issue of the journal Science.

"We already knew there is a small perennial cap of carbon-dioxide ice on top of the water ice there, but this buried deposit has about 30 times more dry ice than previously estimated," said Roger Phillips of Southwest Research Institute in Boulder, Colo. Phillips is deputy team leader for the Mars Reconnaissance Orbiter's Shallow Radar instrument and lead author of the report. 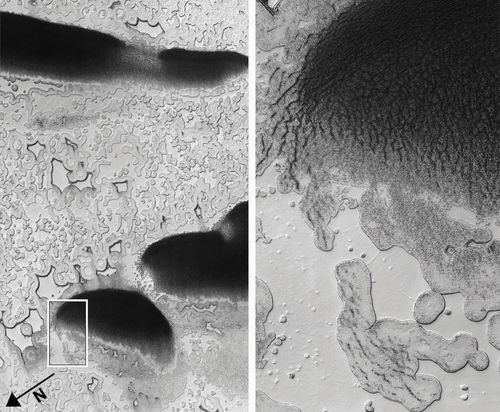 Pitting from Sublimation of Underlying Dry-Ice Layer
These images from orbit show an area near Mars' south pole where coalescing or elongated pits are interpreted as signs that an underlying deposit of frozen carbon dioxide, or "dry ice," has been shrinking by sublimation.
Download full image ›

"We identified the deposit as dry ice by determining the radar signature fit the radio-wave transmission characteristics of frozen carbon dioxide far better than the characteristics of frozen water," said Roberto Seu of Sapienza University of Rome, team leader for the Shallow Radar and a co-author of the new report. Additional evidence came from correlating the deposit to visible sublimation features typical of dry ice.

An occasional increase in the atmosphere would strengthen winds, lofting more dust and leading to more frequent and more intense dust storms. Another result is an expanded area on the planet's surface where liquid water could persist without boiling. Modeling based on known variation in the tilt of Mars' axis suggests several-fold changes in the total mass of the planet's atmosphere can happen on time frames of 100,000 years or less.

The changes in atmospheric density caused by the carbon-dioxide increase also would amplify some effects of the changes caused by the tilt. Researchers plugged the mass of the buried carbon-dioxide deposit into climate models for the period when Mars' tilt and orbital properties maximize the amount of summer sunshine hitting the south pole. They found at such times, global, year-round average air pressure is approximately 75 percent greater than the current level.

Cross Section of Buried Carbon-Dioxide Ice on Mars
This cross-section view of underground layers near Mars' south pole is a radargram based on data from the Shallow Subsurface Radar (SHARAD) instrument on NASA's Mars Reconnaissance Orbiter
Download full image ›
"A tilted Mars with a thicker carbon-dioxide atmosphere causes a greenhouse effect that tries to warm the Martian surface, while thicker and longer-lived polar ice caps try to cool it," said co-author Robert Haberle, a planetary scientist at NASA's Ames Research Center in Moffett Field, Calif. "Our simulations show the polar caps cool more than the greenhouse warms. Unlike Earth, which has a thick, moist atmosphere that produces a strong greenhouse effect, Mars' atmosphere is too thin and dry to produce as strong a greenhouse effect as Earth's, even when you double its carbon-dioxide content."

The Shallow Radar, one of the Mars Reconnaissance Orbiter's six instruments, was provided by the Italian Space Agency, and its operations are led by the Department of Information Engineering, Electronics and Telecommunications at Sapienza University of Rome. NASA's Jet Propulsion Laboratory, a division of the California Institute of Technology in Pasadena, manages the Mars Reconnaissance Orbiter project for NASA's Science Mission Directorate at the agency's headquarters in Washington. Lockheed Martin Space Systems in Denver built the spacecraft.