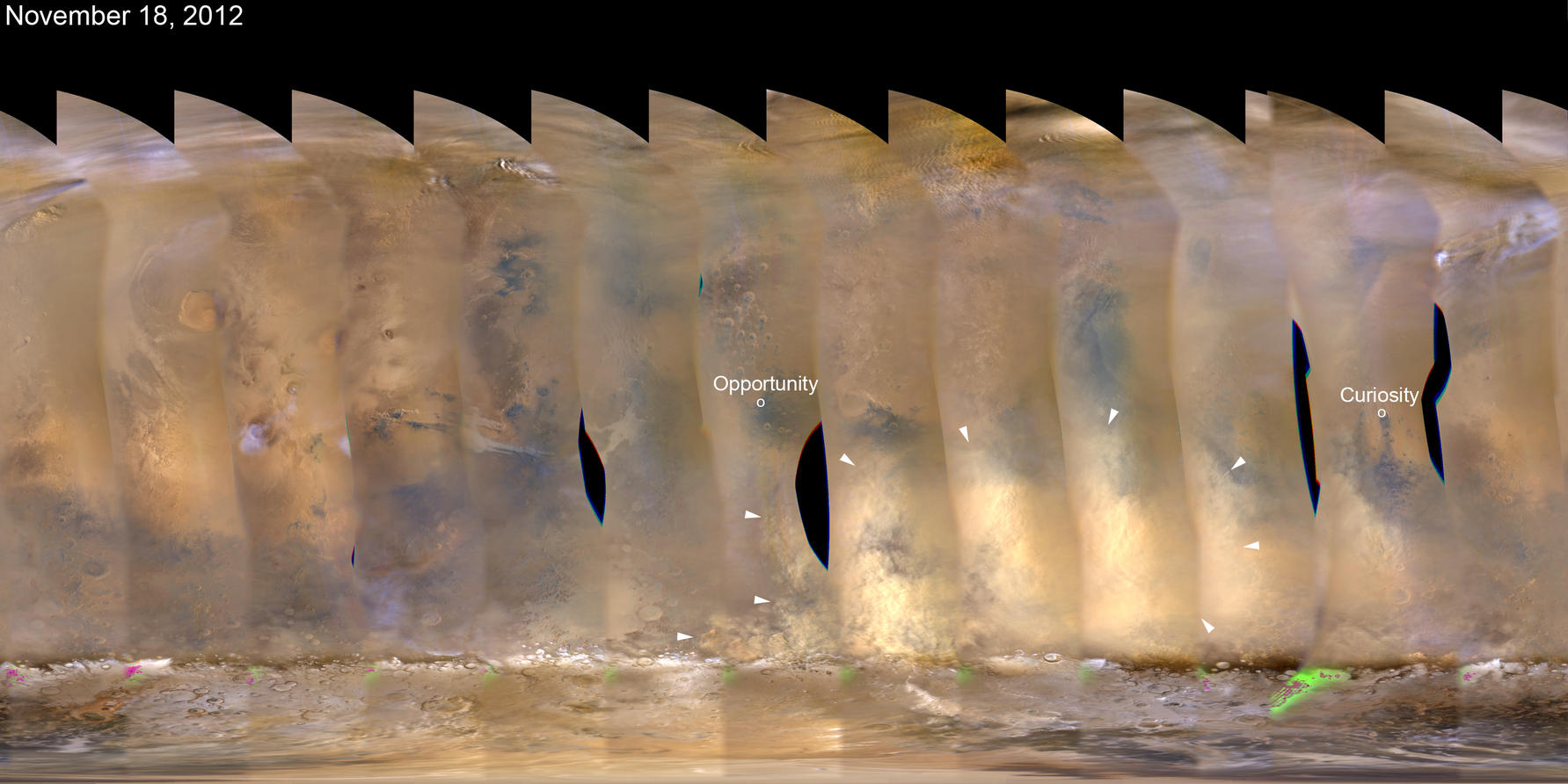 Using the orbiter's Mars Color Imager, Bruce Cantor of Malin Space Science Systems, San Diego, began observing the storm on Nov. 10, and subsequently reported it to the team operating NASA's Mars Exploration Rover Opportunity. The storm came no closer than about 837 miles (1,347 kilometers) from Opportunity, resulting in only a slight drop in atmospheric clarity over that rover, which does not have a weather station.

Halfway around the planet from Opportunity, the NASA Mars rover Curiosity's weather station has detected atmospheric changes related to the storm. Sensors on the Rover Environmental Monitoring Station (REMS), which was provided for Curiosity by Spain, have measured decreased air pressure and a slight rise in overnight low temperature.

"This is now a regional dust storm. It has covered a fairly extensive region with its dust haze, and it is in a part of the planet where some regional storms in the past have grown into global dust hazes," said Rich Zurek, chief Mars scientist at NASA's Jet Propulsion Laboratory, Pasadena, Calif. "For the first time since the Viking missions of the 1970s, we are studying a regional dust storm both from orbit and with a weather station on the surface."

Curiosity's equatorial location and the sensors on REMS, together with the daily global coverage provided by the Mars Reconnaissance Orbiter, provide new advantages compared with what Viking offered with its combination of orbiters and landers. The latest weekly Mars weather report from the orbiter's Mars Color Imager is at http://www.msss.com/msss_images/2012/11/21/ .

Each Martian year lasts about two Earth years. Regional dust storms expanded and affected vast areas of Mars in 2001 and 2007, but not between those years nor since 2007.

"One thing we want to learn is why do some Martian dust storms get to this size and stop growing, while others this size keep growing and go global," Zurek said.

From decades of observing Mars, scientists know there is a seasonal pattern to the largest Martian dust-storm events. The dust-storm season began just a few weeks ago, with the start of southern-hemisphere spring.

Starting on Nov. 16, the Mars Climate Sounder instrument on the Mars Reconnaissance Orbiter detected a warming of the atmosphere at about 16 miles (25 kilometers) above the storm. Since then, the atmosphere in the region has warmed by about 45 degrees Fahrenheit (25 degrees Celsius). This is due to the dust absorbing sunlight at that height, so it indicates the dust is being lofted well above the surface and the winds are starting to create a dust haze over a broad region.

Warmer temperatures are seen not only in the dustier atmosphere in the south, but also in a hot spot near northern polar latitudes due to changes in the atmospheric circulation. Similar changes affect the pressure measured by Curiosity even though the dust haze is still far away.

Besides the research value in better understanding storm behavior, monitoring the storm is also important for Mars rover operations. If the storm were to go global, the Opportunity rover would be affected most. More dust in the air or falling onto its solar panels would reduce the solar-powered rover's energy supply for daily operations. Curiosity is powered by a radioisotope thermoelectric generator, rather than solar cells. The main effects of increased dust in the air at its site would be haze in images and increased air temperature.

JPL, a division of the California Institute of Technology, Pasadena, manages the Mars Reconnaissance Orbiter Project and both of the Mars rover projects for NASA's Science Mission Directorate, Washington.

For more information about the missions of NASA's Mars Exploration Program, visit http://marsprogram.jpl.nasa.gov/ .