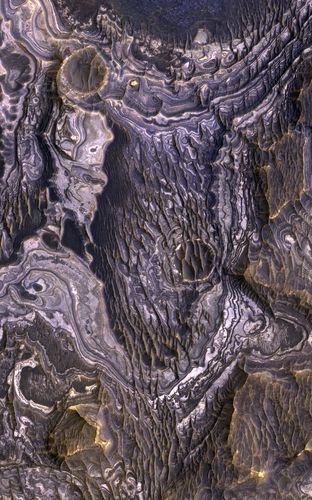 Bright Layered Deposits with Clues of Acidic Water
This view shows color variations in bright layered deposits on a plateau near Juventae Chasma in the Valles Marineris region of Mars. A brown mantle covers portions of the bright deposits.
Download full image ›

Martian landforms shaped by winds, water, lava flow, seasonal icing and other forces are analyzed in 21 journal reports based on data from a camera orbiting Mars.

The research in a January special issue of Icarus testifies to the diversity of the planet being examined by the High Resolution Imaging Science Experiment (HiRISE) camera on NASA's Mars Reconnaissance Orbiter. Examples of the findings include:

-- Valleys associated with light-toned layered deposits in several locations along the plateaus adjacent to the largest canyon system on Mars suggest low-temperature alteration of volcanic rocks by acidic water both before and after formation of the canyons.

-- The youngest flood-lava flow on Mars, found in the Elysium Planitia region and covering an area the size of Oregon, is the product of a single eruption and was put in place turbulently over a span of several weeks at most.

HiRISE is operated by the University of Arizona, Tucson, and was built by Ball Aerospace & Technologies Corp., Boulder, Colo. It is one of six instruments on NASA's Mars Reconnaissance Orbiter, which is managed by NASA's Jet Propulsion Laboratory, Pasadena, Calif., and was built by Lockheed Martin Space Systems, Denver. The U.S. Geological Survey Astrogeology Science Center, Flagstaff, Ariz., played a special role in preparation of the special issue, providing two guest editors and authorship of multiple papers. For more information, see http://hirise.lpl.arizona.edu.