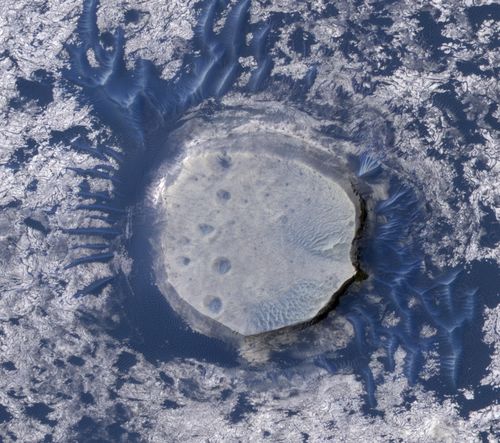 Dunes and Inverted Crater in Arabia Terra
This view of an inverted crater in the Arabia Terra region of Mars is among the images taken by NASA's Mars Reconnaissance Orbiter in early 2010 as the spacecraft approached the 100-terabit milestone in total data returned.

That 100 trillion bits of information is more data than in 35 hours of uncompressed high-definition video. It's also more than three times the amount of data from all other deep-space missions combined -- not just the ones to Mars, but every mission that has flown past the orbit of Earth's moon.

"What is most impressive about all these data is not the sheer quantity, but the quality of what they tell us about our neighbor planet," said Mars Reconnaissance Orbiter Project Scientist Rich Zurek, of NASA's Jet Propulsion Laboratory, Pasadena, Calif. "The data from the orbiter's six instruments have given us a much deeper understanding of the diversity of environments on Mars today and how they have changed over time."

The spacecraft entered orbit around Mars on March 10, 2006, following an Aug. 12, 2005, launch from Florida. It completed its primary science phase in 2008 and continues investigations of Mars' surface, subsurface and atmosphere.

The orbiter sports a dish antenna 3 meters (10 feet) in diameter and uses it to pour data Earthward at up to 6 megabits per second. Its science instruments are three cameras, a spectrometer for identifying minerals, a ground-penetrating radar and an atmosphere sounder.

The capability to return enormous volumes of data enables these instruments to view Mars at unprecedented spatial resolutions. Half the planet has been covered at 6 meters (20 feet) per pixel, and nearly 1 percent of the planet has been observed at about 30 centimeters (1 foot) per pixel, sharp enough to discern objects the size of a desk. The radar, provided by Italy, has looked beneath the surface in 6,500 observing strips, sampling about half the planet.

Among the mission's major findings is that the action of water on and near the surface of Mars occurred for hundreds of millions of years. This activity was at least regional and possibly global in extent, though possibly intermittent. The spacecraft has also observed that signatures of a variety of watery environments, some acidic, some alkaline, increase the possibility that there are places on Mars that could reveal evidence of past life, if it ever existed.

JPL, a division of the California Institute of Technology, Pasadena, manages the Mars Reconnaissance Orbiter for NASA's Science Mission Directorate, Washington. Lockheed Martin Space Systems, Denver, is the spacecraft development and integration contractor for the project and built the spacecraft.

The Shallow Radar instrument was provided by the Italian Space Agency, and its operations are led by the InfoCom Department, University of Rome "La Sapienza." Thales Alenia Space Italia, in Rome, is the Italian Space Agency's prime contractor for the radar instrument. Astro Aerospace of Carpinteria, Calif., a business unit of Los Angeles-based Northrop Grumman Corp., developed the instrument's antenna as a subcontractor to Thales Alenia Space Italia.

Mars Dunes: On the Move?