What has NASA's Perseverance rover accomplished since landing on the surface of Mars in February 2021? Surface Operations Mission Manager Jessica Samuels reflects on a year filled with groundbreaking discoveries at Jezero Crater and counts up the rover's achievements.

Instead of using onboard jets and propellant to adjust a spacecraft's orbit, aerobraking uses the atmosphere as both a brake and a steering wheel. The technique, however, shares more elements with sailing than with driving: successful aerobraking depends upon precise navigation, knowledge of weather and a solid understanding of the forces the craft can withstand.

To find out what Odyssey will be studying at Mars, take a look at Odyssey's science goals, the technology that will make discoveries possible, or hear directly from some of Odyssey's lead scientists: Bill Boynton from the University of Arizona, Phil Christensen from Arizona State University, and Frank Cucinotta from Johnson Space Center.

Atmospheric drag - the friction the spacecraft experiences as it passes through the top layer of the atmosphere - slows down the spacecraft. Each pass brings the spacecraft to a lower altitude. Repeated "drag passes" as they are called are conducted to shape the spacecraft's trajectory from its initial elliptical, egg-shaped orbit into the desired circular orbit.

The design of each drag pass is carefully worked out by navigators, spacecraft engineers and scientists who measure the results of the preceding pass, read measurements and estimate the height and density of the atmosphere, predict the atmosphere's effect on the spacecraft's structure, and determine the best entry and exit points to achieve the orbital geometry required for the mission.

Aerobraking is extremely challenging but worth it, say mission engineers, because it eliminates the need for the heavy load of extra propellant that would otherwise be needed to place the spacecraft in its desired orbit.

A large, heavy spacecraft requires a large, expensive launch vehicle. NASA has successfully driven down costs of space exploration missions by using smaller spacecraft for launch on smaller, less costly rockets than those used for most interplanetary missions in the past. Research and development dedicated to new technology is delivering ever-smaller miniaturized instrumentation and electronics. As a result, most interplanetary spacecraft today are less than half as large as spacecraft designed 10 or more years ago, and these can be launched on relatively small rockets. 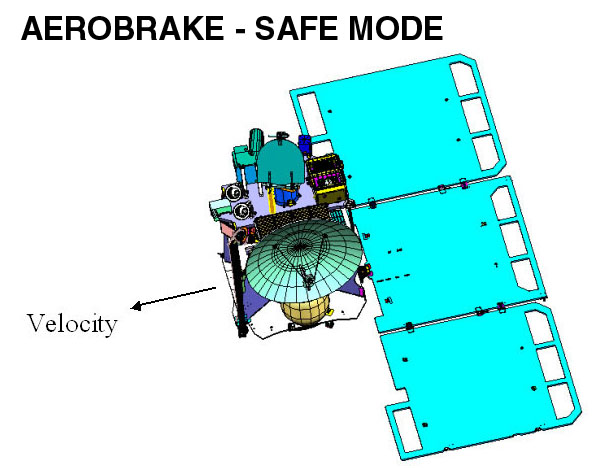 But no matter how small the spacecraft, if it is destined to orbit another planet, it must have the means to slow down once it gets there in order to be captured into orbit. (Aerocapture, a close cousin of aerobraking, is an as-yet-untested technique that would use the friction of a planetary atmosphere to actually capture a spacecraft into orbit. This would eliminate the need for most of the large amount of fuel now needed for delivering a spacecraft into the desired orbit around Mars.) Once a spacecraft is captured, it still needs to reach the particular orbital geometry required for the mission. So far, two means exist to move the spacecraft into the desired orbit: chemical rockets or aerobraking.

Even for a small-sized spacecraft, a massive amount of propellant is required for an orbit insertion. Almost half of Odyssey's total mass is simply rocket fuel that will be expended in the approximately 20-minute Mars orbit insertion engine firing. Without aerobraking, even more propellant would have to have been added to the spacecraft to bring Odyssey into its final orbit. The additional mass would have pushed the spacecraft weight beyond the capability of the low-cost launch vehicle and required a larger, more expensive rocket.

Odyssey's aerobraking occurs in three primary phases that engineers call 'walk-in', 'the main phase' and 'walk-out'. The walk-in phase occurs during the first four to eight orbits following Mars arrival. That phase will be used as a calibration period so that engineers can understand how the spacecraft behaves in and out of aerobraking. It will help determine the adequacy of the Odyssey team's aerobraking plans and ensure their assumptions about Mars' atmosphere.

Martian dust storms, which can dramatically change the height and density of the atmosphere, are a particular concern during aerobraking. The mission's first Mars image, to be taken by the Thermal Emission Imaging System (THEMIS) in the early phase of aerobraking, will test its capability to look at the atmosphere to detect dust storms. Also on the lookout for dust storms is Odyssey's sibling spacecraft, Mars Global Surveyor, already in orbit at Mars. If for some reason Global Surveyor is unavailable for that purpose, Odyssey's thermal emission imaging system, which is partly an infrared camera, will be used for atmospheric monitoring of Mars.

The main aerobraking phase begins once the point of the spacecraft's closest approach to the planet has been lowered to within about 100 kilometers (about 60 miles) above the Martian surface. (That point is known as the orbit's "periapsis") Approximately 380 "drag passes", the term to describe the spacecraft's flight through the atmosphere, will be accomplished in 78 days. Each pass will reduce the altitude of the spacecraft and "trim" its orbit into a more circular flight path. With each pass too, the spacecraft's point of closest approach to Mars will move northward eventually drifting over Mars' north pole and then back down the "other side" of the planet.

The Odyssey team will periodically use the onboard jets to make adjustments before some passes through the atmosphere. Such adjustments might need to be made if the spacecraft is found to be flying too high or too low in the atmosphere.

The aerobraking drag passes will be flown under the direction of commands stored in the central onboard computer. Each pass commences with a warm-up of the small thrusters used to make any last minute adjustments. The radio transmitter is turned off to conserve power during the drag pass; the power savings are important because Odyssey will temporarily be without use of its solar panels. The solar panels double as an aerobraking "drag chute", and must be secured to the body of the spacecraft to face into the martian atmosphere. Battery power supplies electricity during aerobraking.

Odyssey's gyro-like reaction wheels now spin to adjust the spacecraft's orientation in space, pointing the solar panels down to brush the top of Mars' atmosphere.

The walk-out phase occurs during the last few days of aerobraking. At that time, Odyssey's orbit will still be egg-shaped. The lowest point (periapsis) will be near an altitude of 120 kilometers (75 miles) and is most distant point (apoapsis) will be near the 400-kilometer (250-mile) altitude planned for the mission. Onboard thrusters will be fired to raise the periapsis to achieve the final 400-kilometer (250-mile) circular science orbit.