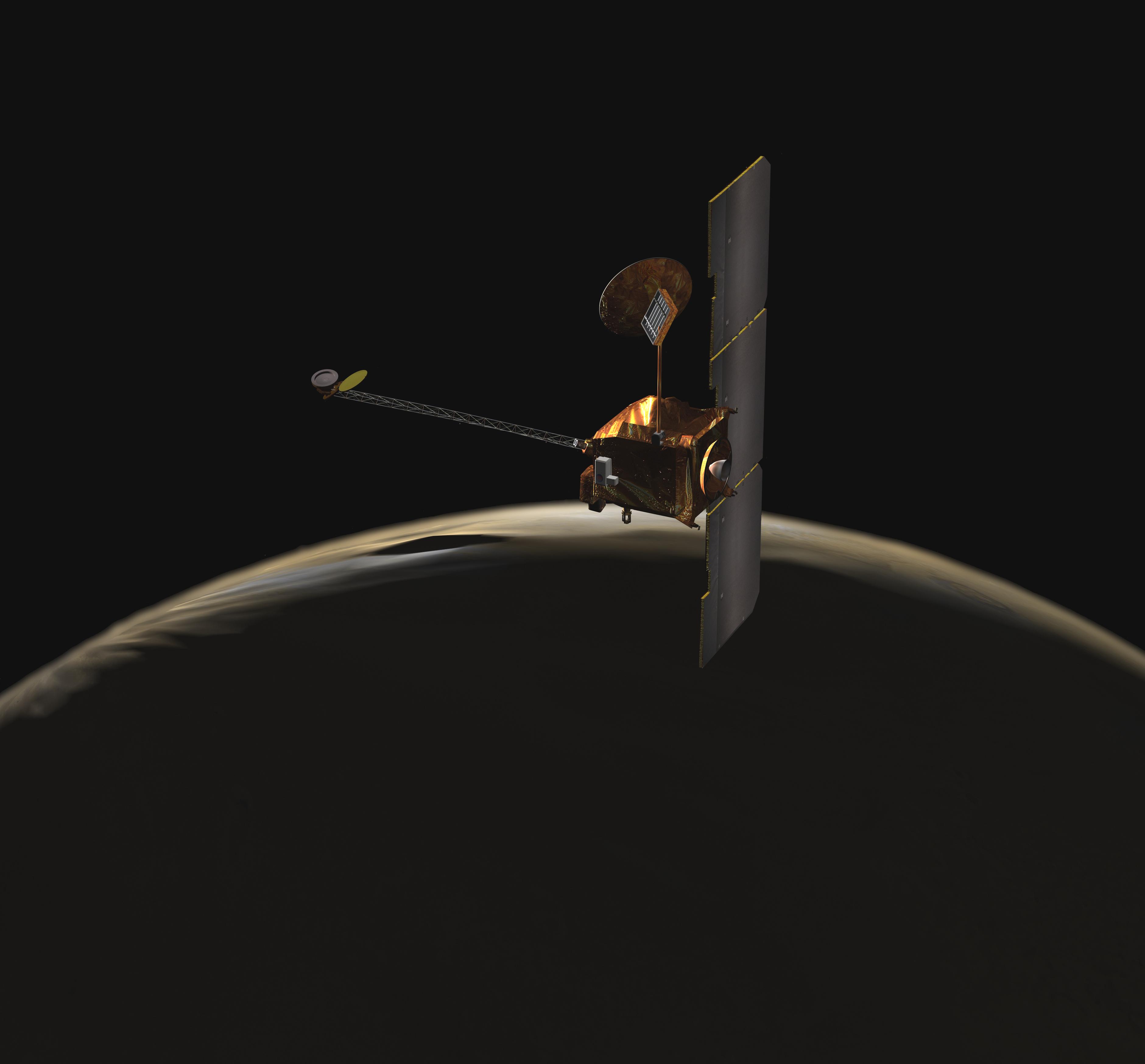 Odyssey over Martian Sunrise (Artist's Concept)
NASA's Mars Odyssey spacecraft passes above a portion of the planet that is rotating into the sunlight in this artist's concept illustration.
Download full image ›

The interplanetary cruise phase is the period of travel from the Earth to Mars and lasts about 200 days. It begins with the first contact by the DSN after launch and extends until seven days before Mars arrival. 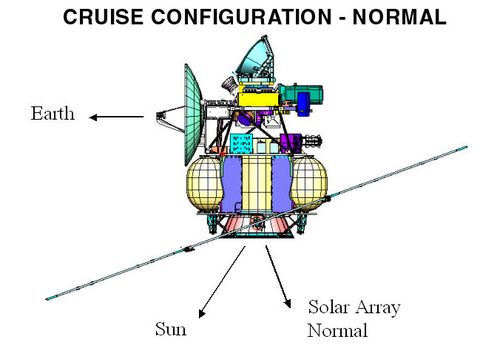 Science activities planned for the cruise phase include payload health and status checks, instrument calibrations, and data taking by some of the science instruments as spacecraft limitations allow.

Odyssey's flight path to Mars is called a Type 1 trajectory that takes it less than 180 degrees around the Sun. During the first two months of cruise, only the Deep Space Network station in Canberra will be capable of viewing the spacecraft. Late in May, California's Goldstone station will come into view, and by early June, the Madrid station will also be able to track the spacecraft. The project has also added the use of a tracking station in Santiago, Chile to fill in tracking coverage early in the mission. 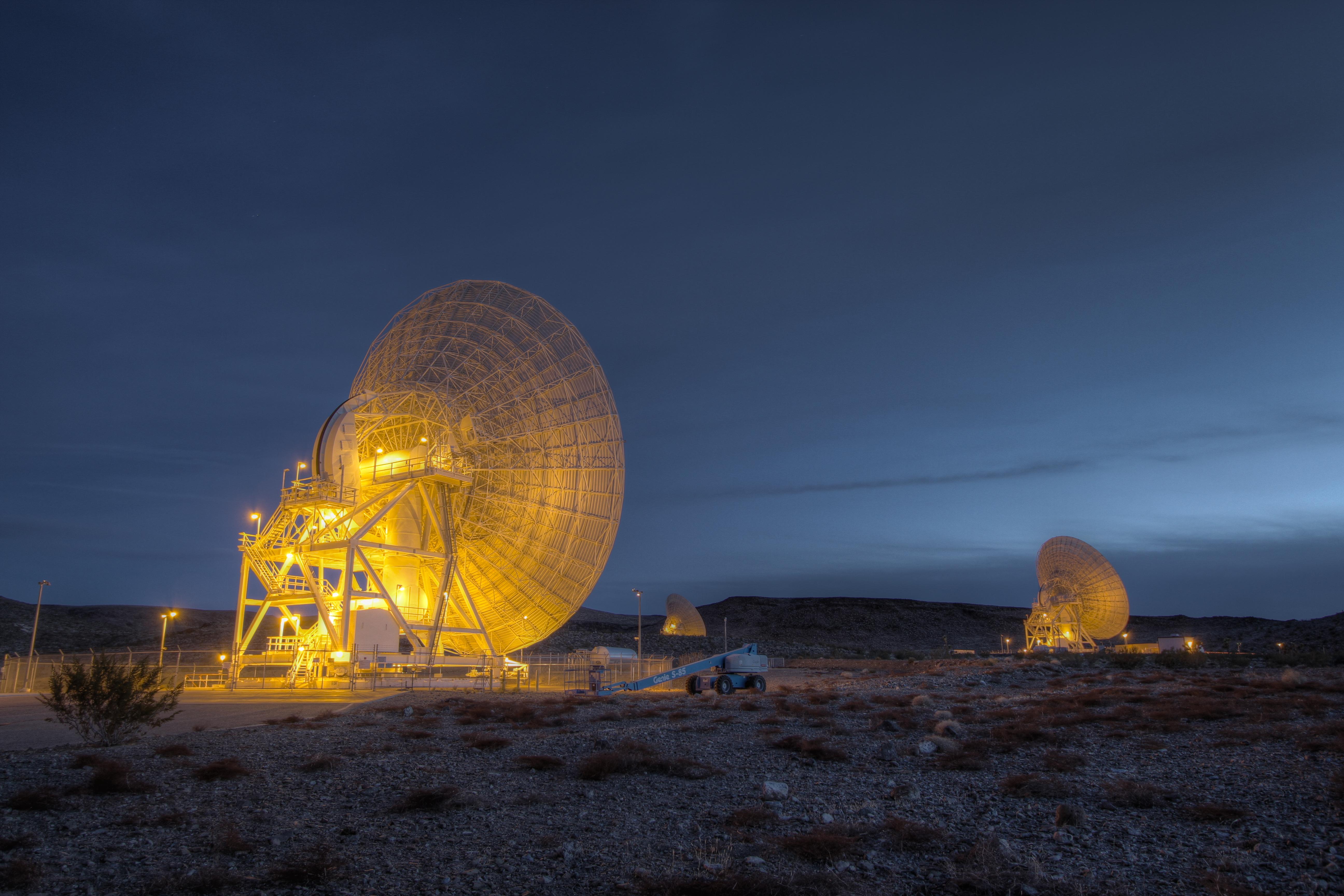 The orbiter will transmit to Earth using its medium-gain antenna and will receive commands on its low-gain antenna during the early portion on its flight. At some point during the first 30 days after launch, the orbiter will be commanded to receive and transmit through its high-gain antenna. Cruise command sequences are generated and uplinked approximately once every four weeks during one of the regularly scheduled Deep Space Network passes.

The spacecraft's orientation will be controlled by reaction wheels (devices with spinning wheels similar to gyroscopes). These devices will be occasionally "desaturated," meaning that their momentum will be unloaded by firing the spacecraft's thrusters.

During interplanetary cruise, Odyssey is scheduled to fire its thrusters a total of five times to adjust its flight path. The first of these trajectory correction maneuvers is scheduled for eight days after launch, and will correct launch injection errors and adjust the Mars arrival aim point. It will be followed by a second maneuver 90 days after launch.

The remaining three trajectory correction maneuvers will be used to direct the spacecraft to the proper aim point at Mars. These maneuvers are scheduled at 40 days (September 14), seven days (October 17) and seven hours (October 24) before arrival. The spacecraft will communicate with Deep Space Network antennas continuously for 24 hours around all of the trajectory correction maneuvers. Maneuvers will be conducted in a "turn-and-burn" mode, in which the spacecraft will turn to the desired burn attitude and fire the thrusters. It is assumed that the spacecraft will not generally be Earth-pointed during the thruster firing, so no communication is expected in this short but critical time period.

Navigation tracking during cruise involves the collection of two-way Doppler and ranging data. In order to provide additional information for navigation, the project has added a program of delta differential one-way range measurements, called delta DOR, that will be taken periodically during cruise and Mars approach. Delta DOR measurements are interferometric measurements between two radio sources. In this case, one of the radio sources is the DOR tones or telemetry signal coming from Odyssey. The second source will be either a natural radio source like a quasar or the telemetry signal from the Mars Global Surveyor spacecraft. Each source is recorded simultaneously at two radio antennas. Delta DOR measurements will be collected and processed for system testing during early and mid-cruise and weekly during the Mars approach phase to provide additional data to the navigation team. For the first 14 days after launch the DSN will continuously track the spacecraft. During the quiet phase of cruise, only three 8-hour passes per day are scheduled. Continuous tracking will resume for the final 50 days before Mars arrival.

Science instruments will be powered on, tested and calibrated during cruise. The thermal emission imaging system will take a picture of the Earth/Moon system about 12 days after launch if the spacecraft is operating normally. Star calibration imaging is also planned 45 days after launch, while a Mars approach image is planned about 12 days before arrival if the Earth/Moon calibration image is not taken.

Two calibration periods are planned for the gamma ray spectrometer during cruise. Each of the spectrometer's three sensors may be operated during the calibration periods depending upon spacecraft power capabilities. The Mars Radiation Environment Experiment is designed to collect radiation data constantly during cruise to help determine what the radiation environment is like on the way to Mars.