What is the Mars Orbit insertion?

"Mars Orbit insertion" is the point in the mission when the Odyssey spacecraft arrives just short of Mars, fires an onboard rocket to slow its speed relative to the planet, and is captured into a long looping orbit. 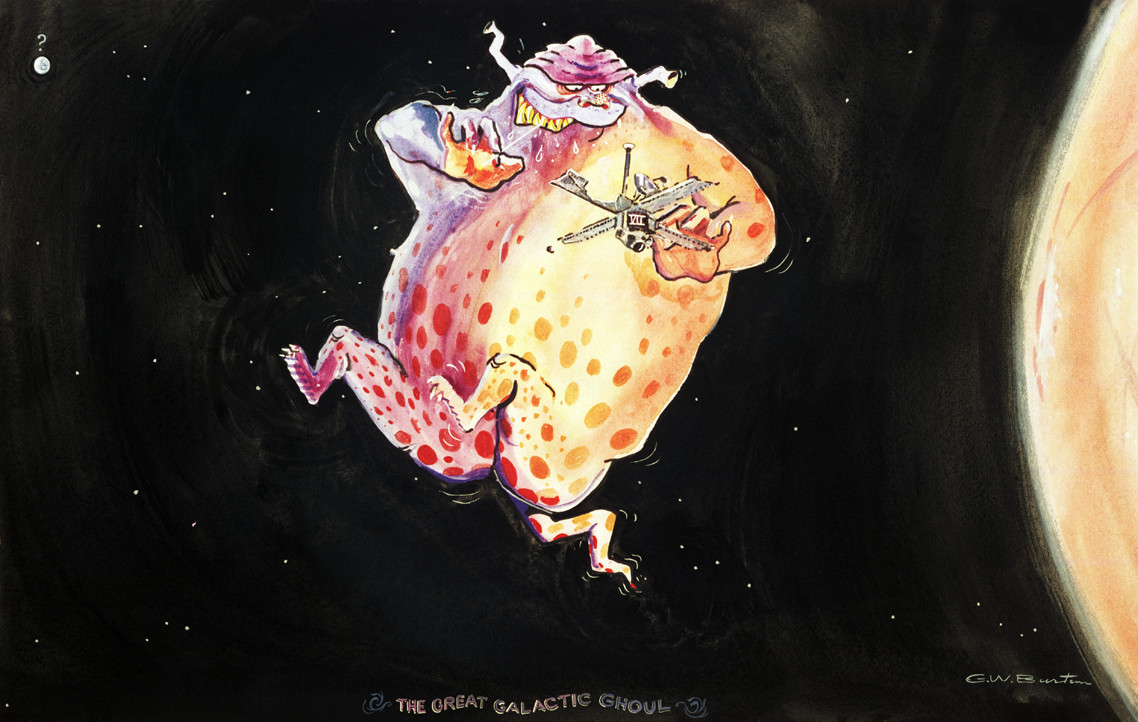 Slipping into orbit around Mars at the entry point required to achieve the mission science goals is a tricky proposition. Inaccurate targeting, timing or a flawed engine firing could cause the spacecraft to be destroyed in Mars' atmosphere or could cause Odyssey to miss Mars completely.

The Mars Odyssey team has undergone several rigorous reviews and operations and systems tests to help ensure that all will go well. The team is trained to respond to a wide range of technical anomalies that could arise. "Gremlins" is one highly technical term engineers use to describe unanticipated problems. To prepare for them, the flight team has been drilled with mock spacecraft and ground operations emergencies.

Preparations for the orbit insertion are intense. Precise measurements must be made to learn the spacecraft's position, its velocity and heading. Telecommunications with the spacecraft, conducted through NASA's Deep Space Network, depend upon the smooth and integrated operation of large antennas located at communications complexes around the world. Traveling at the speed of light, it takes a radio signal 8 minutes and 30 seconds to traverse the distance between the spacecraft and Earth. Because of the time delay involved, along with communications outages that will occur when Odyssey passes behind Mars, the spacecraft is programmed to perform all the required actions independent of ground operators. On Odyssey itself, each of thousands of software commands, mechanical and pyrotechnic events must be successfully executed right on time for the insertion maneuver to succeed.

What will happen during Mars Orbit Insertion?

On the appointed day, Odyssey will be approaching Mars at a speed of 5.907 kilometers per second, or 13,214 miles per hour. At a distance of 1,547 kilometers (961 miles) from Mars, the spacecraft is readied for the engine firing that will brake its approach speed and allow Odyssey to be captured into Mars' orbit. The Mars orbit insertion "burn," as it is called, is the sole purpose of Odyssey's main engine. The 266 kilograms of propellant (587pounds) of hydrazine fuel and nitrogen tetroxide oxidizer that will mix in the controlled combustion of the engine firing represent nearly half the weight of the entire spacecraft. The engine provides 695 newtons, or 156 pounds of thrust.

Step One: Turn off the Fault Protection Software

One of the first steps in the orbit insertion process is to turn off "fault protection" software onboard Odyssey. This software is a block of special commands that override normal spacecraft operations when an unexpected event occurs on the spacecraft. The commands direct the spacecraft to stop what it's doing and point its antenna toward Earth to await further commands in a so-called "safe" mode. Fault protection software is turned off during maneuvers like engine firings to prevent such an override from interfering with critical events.

Step Two: Fire the Onboard Thrusters

About two-and-a-half hours before the engine firing, commands are sent to fire small onboard thrusters to "desaturate" or unload the momentum of the spinning reaction wheels. These devices are similar to gyroscopes and are used to control the spacecraft's orientation - its positioning in three dimensional space (x, y and z axes) - so that it is facing the desired direction.

Thirty minutes before the firing, the Odyssey team takes a reading from the spacecraft's accelerometer and performs last minute calculations to ensure that the spacecraft is precisely where it is supposed to be. This is the last opportunity to change any parameters, such as timing or direction, of the main engine firing that's about to take place.

Step Four: Turn on the Heat

In the remaining minutes, a number of major electrical, mechanical and communications events take place onboard: catalyst bed heaters, called "catbed" heaters, are turned on to prime the reaction control thrusters in preparation for firing. These small jets control the spacecraft's position in three axes: pitch, yaw and roll, and will fire intermittently during the main engine firing to keep the spacecraft on an even keel. A second set of electrical heaters is turned on to warm the main engine system in preparation for its firing.

The fuel and oxidizer tanks now must be pressurized to ensure an even and complete flow of all the propellant during the engine firing. A series of valves must be opened for pressurization to take place. This is accomplished through two small pyrotechnic charges that are electrically ignited to open valves in tubing about the diameter of a pencil. If fired in a lab on Earth, the firing of the "pyro valves" as they are called would be as loud as a firecracker. But in the soundless vacuum of space, of course, the pyro firings will be silent. Each charge breaks open a seal and creates a clear line to allow the pressurant -- helium gas -- to flow into the fuel and oxidizer tanks.

In about one minute, the oxidizer and fuel tanks will have reached their proper pressure to begin engine firing, which occurs about seven minutes after pressurization begins.

Step Six: Get Ready for Telecommunications

Telecommunications channels are switched from the spacecraft's medium-gain antenna to the low-gain antenna for receipt of commands. The low gain antenna is less powerful, but its can receive and send signals from more angles than the medium-gain antenna. Only the carrier signal - the spacecraft's engineering "heartbeat," which includes no data - will be transmitted from now until about an hour. At that time, the spacecraft will have completed its engine firing behind Mars and reemerged to resume telecommunications with Earth. The 70-meter antenna of the Deep Space Network complex in Goldstone, California locks on to Odyssey's carrier signal. Receipt of this signal will allow ground controllers to gauge the spacecraft's motion and the changes in frequency, called Doppler shift, that occur as the spacecraft's velocity and direction changes during the maneuver. Reaction wheels now turn the spacecraft to face the proper direction in preparation for the engine firing.

A solenoid-actuated valve is electrically opened to allow fuel and oxidizer to flow into the main engine injector. This showerhead-like assembly directs streams of fuel and oxidizer at each other to ensure they will mix in the rocket combustion chamber. When the two mix, they combust, starting the controlled explosion of the spacecraft's 19.7 minute-long firing.

"If you were flying alongside of the spacecraft, you would see the engine start to glow around its throat." As they heated with the burning propellant, parts of the engine and rocket nozzle would emit a reddish-to-white glow. The rocket exhaust, he said, might show up as a translucent, faint blue or white glow, but most of the engine firing would be invisible to human eyes.

Flexible extensions on the spacecraft, such as the solar panels, will vibrate lightly in response to the initial engine firing. The small reaction control thrusters strategically mounted on various parts of the spacecraft will fire to correct any oscillation in the spacecraft's orientation. This keeps the main engine pointed in the right direction.

The firing continues as the spacecraft passes behind Mars, and the Deep Space Network will temporarily lose the spacecraft signal. This may be the most excruciating time for flight controllers. As though awaiting word on their baby from the delivery room, the expectant parents of Mars Odyssey must withstand the silence and trust that all's going as planned. Still incommunicado behind Mars, the spacecraft enters Mars' shadow and flies in darkness for two minutes.

Odyssey reaches periapsis - the lowest point in its first orbit of Mars -- at an altitude of about 328 kilometers (203 miles). When the firing is complete, Odyssey is still behind Mars and out of reach of Earth ground stations.

The Odyssey team now stands by and waits for their spacecraft to break the long silence and report on its condition. On the spacecraft itself, Odyssey's reaction wheels turn the spacecraft to point the high-gain antenna toward Earth to prepare for resumption of communications with Earth. Fault protection software that was turned off during the orbit insertion firing is turned on again.

At last, from Earth's point of view, Odyssey emerges from behind Mars, and the Deep Space Network antennas seek to lock on to the spacecraft's carrier signal. Onboard Odyssey, latching valves close to isolate propellant, oxidizer and pressurant tanks from one another so that no mixing of residual chemicals can occur.

The spacecraft begins transmitting data at 40 bits per second; the Deep Space Network will take several minutes to lock on to the low-rate data stream.

Navigators expect that Odyssey will be captured into an initial orbit that will take between 15 and 25 hours for the spacecraft to round the planet. If the orbit is greater than 22 hours, flight controllers will command the spacecraft to fire its small thrusters to lower the spacecraft's altitude so that it takes no more than 20 hours to circle the planet.