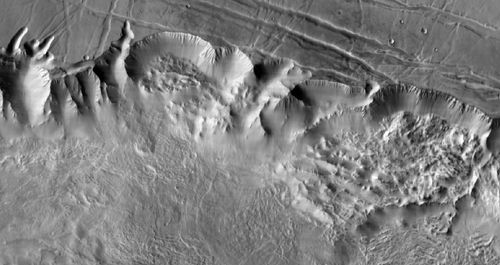 Close View of Valles Marineris
This image shows a 90-mile-wide portion of the giant Valles Marineris canyon system. Landslide debris and gullies in the canyon walls on Mars can be seen at 100 meters (330 feet) per pixel.

Image Credit: NASA/JPL-Caltech/Arizona State University
Download full image ›
PASADENA, Calif. – A camera aboard NASA's Mars Odyssey spacecraft has helped develop the most accurate global Martian map ever. Researchers and the public can access the map via several websites and explore and survey the entire surface of the Red Planet.

The map was constructed using nearly 21,000 images from the Thermal Emission Imaging System, or THEMIS, a multi-band infrared camera on Odyssey. Researchers at Arizona State University's Mars Space Flight Facility in Tempe, in collaboration with NASA's Jet Propulsion Laboratory in Pasadena, Calif., have been compiling the map since THEMIS observations began eight years ago.

The pictures have been smoothed, matched, blended and cartographically controlled to make a giant mosaic. Users can pan around images and zoom into them. At full zoom, the smallest surface details are 100 meters (330 feet) wide. While portions of Mars have been mapped at higher resolution, this map provides the most accurate view so far of the entire planet.

Advanced users with large bandwidth, powerful computers and software capable of handling images in the gigabyte range can download the full-resolution map in sections at: http://www.mars.asu.edu/data/thm_dir_100m.

"We've tied the images to the cartographic control grid provided by the U.S. Geological Survey, which also modeled the THEMIS camera's optics," said Philip Christensen, principal investigator for THEMIS and director of the Mars Space Flight Facility. "This approach lets us remove all instrument distortion, so features on the ground are correctly located to within a few pixels and provide the best global map of Mars to date."

Working with THEMIS images from the new map, the public can contribute to Mars exploration by aligning the images to within a pixel's accuracy at NASA's "Be a Martian" website, which was developed in cooperation with Microsoft Corp. Users can visit the site at: http://beamartian.jpl.nasa.gov/maproom#/MapMars.

"The Mars Odyssey THEMIS team has assembled a spectacular product that will be the base map for Mars researchers for many years to come," said Jeffrey Plaut, Odyssey project scientist at JPL. "The map lays the framework for global studies of properties such as the mineral composition and physical nature of the surface materials."

Other sites build upon the base map. At Mars Image Explorer, which includes images from every Mars orbital mission since the mid-1970s, users can search for images using a map of Mars at: http://themis.asu.edu/maps.

"The broad purpose underlying all these sites is to make Mars exploration easy and engaging for everyone," Christensen said. "We are trying to create a user-friendly interface between the public and NASA's Planetary Data System, which does a terrific job of collecting, validating and archiving data."

Mars Odyssey was launched in April 2001 and reached the Red Planet in October 2001. Science operations began in February 2002. The mission is managed by JPL for NASA's Science Mission Directorate in Washington. Lockheed Martin Space Systems in Denver is the prime contractor for the project and built the spacecraft. NASA's Planetary Data System, sponsored by the Science Mission Directorate, archives and distributes scientific data from the agency's planetary missions, astronomical observations, and laboratory measurements.

JPL is managed for NASA by the California Institute of Technology in Pasadena.