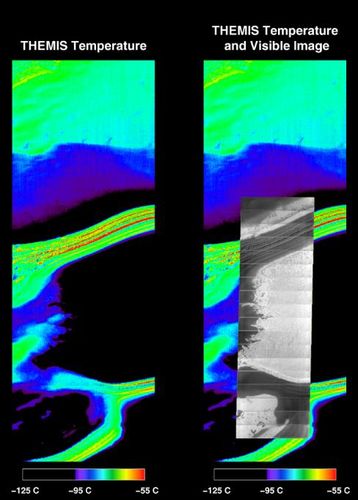 The latest observations from NASA's Mars Odyssey spacecraft, highlighting water ice distribution and infrared images of the Red Planet's surface, are being released this week at the annual meeting of the American Geophysical Union in San Francisco.

"The Odyssey science mission is going exceptionally well," said Dr. Jeffrey Plaut, the Odyssey project scientist at NASA's Jet Propulsion Laboratory, Pasadena, Calif. "The instrument teams have already collected a huge volume of data, and the presentations at this conference are the most extensive and illuminating of the mission so far."

In mid-October the frozen carbon dioxide, which seasonally caps Mars' north pole, evaporated enough to give Odyssey's scientists their first chance to look there for ice. "We are really excited about what we are seeing in the north polar region of Mars. With the seasonal carbon dioxide frost gone, we can see evidence of massive amounts of water ice in the soil, even more than we found in the south," said Dr. William Boynton, principal investigator for Odyssey's gamma-ray spectrometer suite at the University of Arizona, Tucson.

"The infrared and visible images have revealed a wonderful diversity of surface types and features. Nighttime temperature images show complex patterns of rock layers, rocky debris, sand and dust produced by impact cratering, wind erosion and deposition," said Dr. Philip Christensen, principal investigator for Odyssey's thermal-infrared imaging system at Arizona State University, Tempe. "Color infrared images of Mars show variations in rock layers similar to those seen in the layered rocks of the Grand Canyon. The visible color images show Mars to be a dusty place, with most of the surface covered by a thin layer of bright orange-red dust."

"The Martian Radiation Environment Experiment has observed very different space weather near Mars than has been seen during the same period by satellites near Earth," said Dr. Cary Zeitlin, principal investigator for that experiment at the National Space Biomedical Research Institute, Houston. "Variations in space weather are caused by solar activity, including solar flares. To help us understand these events, we compare data from Odyssey to data from similar instruments in orbit around Earth. The recent observations are particularly exciting because Earth and Mars have been on opposite sides of the Sun," he said.

- Candor Chasma on Mars, in Color

- Martian Highlands at Night in Infrared

JPL, a division of the California Institute of Technology in Pasadena, manages the Mars Odyssey mission for NASA's Office of Space Science in Washington, D.C. Investigators at Arizona State University in Tempe, the University of Arizona in Tucson and NASA's Johnson Space Center, Houston, operate the science instruments. Additional science partners are located at the Russian Aviation and Space Agency and at Los Alamos National Laboratories, New Mexico. Lockheed Martin Astronautics, Denver, the prime contractor for the project, developed and built the orbiter. Mission operations are conducted jointly from Lockheed Martin and from JPL.