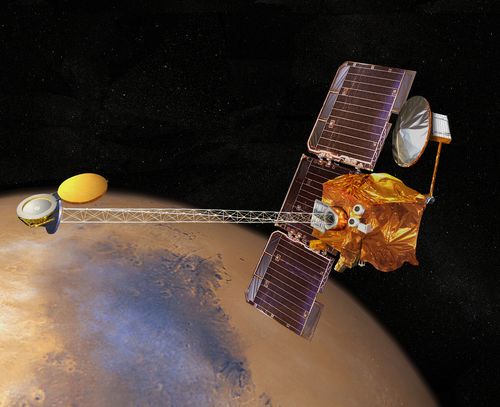 The Martian radiation environment experiment on NASA's 2001 Mars Odyssey orbiter has collected data continuously from the start of the Odyssey mapping mission in March 2002 until late last month. The instrument has successfully monitored space radiation to evaluate the risks to future Mars-bound astronauts. Its measurements are the first of their kind to be obtained during an interplanetary cruise and in orbit around another planet.

On Oct. 28, 2003, during a period of intense solar activity, the instrument stopped working properly. Controllers' efforts to restore the instrument to normal operations have not been successful. These efforts will continue for the next several weeks or months.

The Martian radiation environment experiment detects energetic charged particles, including galactic cosmic rays and particles emitted by the Sun in coronal mass ejections. The dose equivalent from galactic cosmic rays as measured by the instrument agrees well with predictions based on modeling. Validation of radiation models is a crucial step in predicting radiation-related health risks for crews of future missions.

"Even if the instrument provides no additional data in the future, it has been a great success at characterizing the radiation environment that a crewed mission to Mars would need to anticipate," said Dr. Jeffrey Plaut, project scientist for Mars Odyssey at NASA's Jet Propulsion Laboratory, Pasadena, Calif.