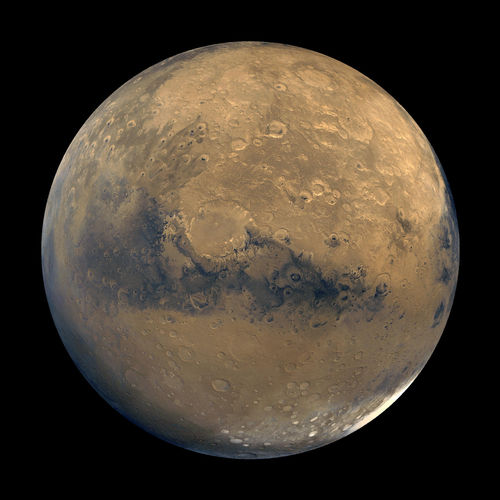 Credit: NASA/JPL-Caltech/USGS
Mosaic of Mars
The Mars Exploration Program is a science-driven program that seeks to understand whether Mars was, is, or can be, a habitable world. To find out, we need to understand how geologic, climatic, and other processes have worked to shape Mars and its environment over time, as well as how they interact today.

Mars is similar to Earth in many ways, having many of the same "systems" that characterize our home world. Like Earth, Mars has an atmosphere, a hydrosphere, a cryosphere and a lithosphere. In other words, Mars has systems of air, water, ice, and geology that all interact to produce the Martian environment.
What we don't know yet is whether Mars ever developed or maintained a biosphere--an environment in which life could thrive.

To discover the possibilities for past or present life on Mars, NASA's Mars Exploration Program is currently following an exploration strategy known as "Seek Signs of Life." This science theme is built on the prior science theme of "Follow the Water," which guided missions such as 2001 Mars Odyssey, Mars Exploration Rovers, Mars Reconnaissance Orbiter, and the Mars Phoenix Lander.

Progressive discoveries related to evidence of past and present water in the geologic record make it possible to take the next steps toward finding evidence of life itself. The Mars Science Laboratory mission and its Curiosity rover mark a transition between the themes of "Follow the Water" and "Seek Signs of Life." In addition to landing in a place with past evidence of water, Curiosity is seeking evidence of organics, the chemical building blocks of life. Places with water and the chemistry needed for life potentially provide habitable conditions. Future Mars missions under the science theme "Seek Signs of Life" would likely be designed to search for life itself in places identified as potential past or present habitats.

The key to understanding the past, present or future potential for life on Mars can be found in the four broad, overarching goals for Mars Exploration: